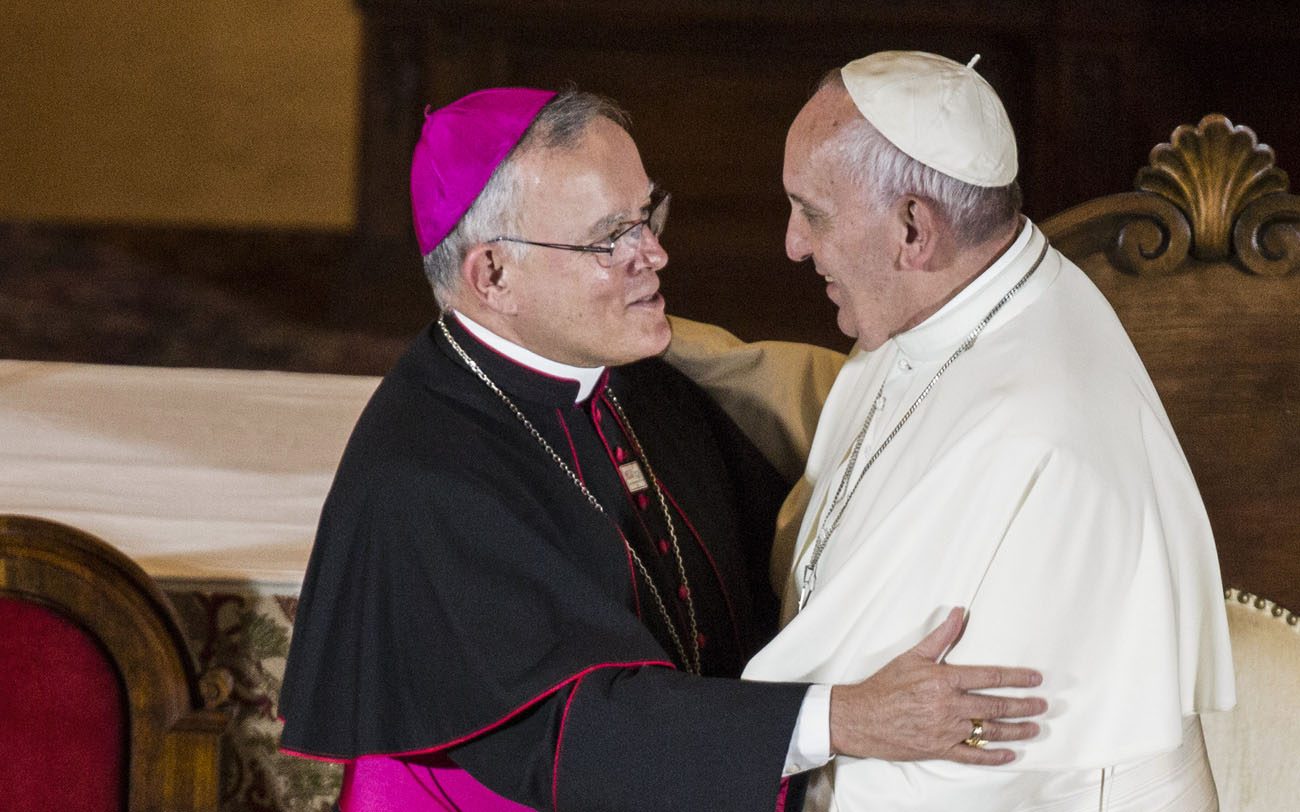 Archbishop Charles Chaput was asked about critical remarks by Cardinal-designate Kevin Farrell on how dioceses implemented Amoris Laetitia. The article by Catholic News Service contained a portion of his responses. The CNS article and the full text of the Archbishop’s responses can be found below.

VATICAN CITY (CNS) — Cardinal-designate Kevin J. Farrell believes the U.S. bishops as a whole should have discussed pastoral guidelines for implementing Pope Francis’ exhortation on the family before individual bishops began issuing guidelines for their own dioceses.

Implementing the pope’s exhortation, “Amoris Laetitia,” he said, “has to be done in communion with our bishops. I think that it would have been wiser to wait for the gathering of the conference of bishops where all the bishops of the United States or all the bishops of a country would sit down and discuss these things.”

A conference-wide discussion, he told Catholic News Service Nov. 15, would ensure “an approach that would not cause as much division among bishops and dioceses, and misunderstandings.”

In late September, Archbishop Joseph E. Kurtz of Louisville, Kentucky, then-president of the U.S. Conference of Catholic Bishops, issued a statement on “Amoris Laetitia” in which he announced that a report had been sent to Rome on the “reception and implementation” of the apostolic exhortation. “As noted in the report,” he said, “the church in the United States has already eagerly begun to implement the teaching” of the document in numerous ways.

Archbishop Kurtz said he anticipated the development “of a renewed, comprehensive pastoral plan for marriage and family life ministry” over the “next few years.”

The committee that produced the report was headed by Archbishop Charles J. Chaput of Philadelphia, head of the U.S. bishops’ ad hoc committee for implementing “Amoris Laetitia.” The archbishop attended the extraordinary and ordinary synods of bishops on the family, in 2014 and 2015.

In July, the Archdiocese of Philadelphia issued its own pastoral guidelines on “Amoris Laetitia.” Since then, other bishops have issued guidelines on the document and pastoral discernment and accompaniment of married couples.

Among other things, the Philadelphia guidelines state that while divorced and civilly remarried couples should be welcome in parishes and accompanied by priests, they may not receive Communion unless they live as brother and sister.

Cardinal-designate Farrell was bishop of Dallas and a member of the U.S. Conference of Catholic Bishops until September when he became prefect of the new Vatican Dicastery for Laity, the Family and Life. He was asked specifically about pastoral guidelines by Archbishop Chaput.

“I don’t share the view of what Archbishop Chaput did, no,” the cardinal-designate said. “I think there are all kinds of different circumstances and situations that we have to look at — each case as it is presented to us.”

“I think that is what our Holy Father is speaking about, is when we talk about accompanying, it is not a decision that is made irrespective of the couple,” he said. “Obviously, there is an objective moral law,” he said, but you will never find two couples who have the same reason for being divorced and remarried.

Contacted by Catholic News Service, Archbishop Chaput said the guidelines he issued “have a clear emphasis on mercy and compassion. This makes sense because individual circumstances are often complex. Life is messy.”

However, he told CNS, “mercy and compassion cannot be separated from truth and remain legitimate virtues. The church cannot contradict or circumvent Scripture and her own magisterium without invalidating her mission. This should be obvious. The words of Jesus himself are very direct and radical on the matter of divorce.”

“Our guidelines were actually ready by June 1, after consulting our Priests’ Council, Archdiocesan Pastoral Council, auxiliary bishops, seminary faculty, and a variety of liturgical, canonical and theological experts, both lay and clergy — all of whom made excellent suggestions. We waited until July 1 to complete a final review,” the archbishop said. “Other bishops have issued their own guidelines and responses consistent with the circumstances of their dioceses, which only they, as local bishops, know with real intimacy.”

Pope Francis’ apostolic exhortation on the family was published in early April. The pope continually has insisted that the document is about the importance and beauty of marriage and family life and the church’s obligation to support and strengthen it.

But much of the debate has focused on the document’s eighth chapter, which speaks of ministry to and access to the sacraments for couples in what the Catholic Church traditionally defined as “irregular situations,” particularly people who were divorced and civilly remarried without an annulment.

Cardinal-designate Farrell said “Amoris Laetitia” is “so important” because of the way it explains and affirms the church’s vision of the joy and beauty of family life and the way it encourages better ways to share that teaching, especially in marriage preparation programs.

“The most important part of ‘Amoris Laetitia’ is not Chapter 8” on accompanying those in irregular situations, he said. “We need to explain marriage, we need to explain human love in a much better and more dynamic way. And we need laypeople to do that.”

“We don’t deny the difficulties” some couples experience or the fact that there are many divorced and remarried Catholics, who “go to our churches in the United States every weekend,” he said. “We have to try to find ways to bring them into full communion.”

Obviously, there are limits to what the church can do because of its firm faith that marriage is indissoluble, he said. “But it is better to say to the couple, ‘Let’s work together and let’s walk together’ — as Pope Francis would say — ‘through this process and see how far we arrive.'”

The Catholic Church cannot react by “closing the doors before we even listen to the circumstances and the people,” the cardinal-designate said. “That’s not the way to go.”

While a few cardinals and bishops have disagreed with the general interpretation of Pope Francis’ exhortation, “I think the bishops are unified,” Cardinal-designate Farrell said.

“Each bishop in his diocese has to set certain rules and parameters, but at the same time, I think that they need to be open to listening to the Holy Spirit and open to what the bishops of the world” discussed at the synods on the family in 2014 and 2015.

Contributing to this story were Carol Glatz and Robert Duncan.

Below is the full text of Archbishop Chaput’s responses to the questions from Catholic News Service.

It’s already done.  The committee solicited thoughts and experiences from bishops around the country.  That work was completed some weeks ago.  The committee report was then presented to Archbishop Kurtz as USCCB president.  Cardinal DiNardo, as the new conference president, will presumably act on it as he and conference leadership find appropriate.

Because both the final synod document and Pope Francis in Amoris Laetitia encouraged local bishops to do so.  Actually you ask a rather odd question.  It’s more sensible to ask:  Why would a bishop delay interpreting and applying Amoris Laetitia for the benefit of his people?  On a matter as vital as sacramental marriage, hesitation and ambiguity are neither wise nor charitable.

You’ll recall, I’m sure, that I was a delegate to the 2015 synod and then elected and appointed to the synod’s permanent council.   So I’m familiar with the material and its context in a way that Cardinal-designate Farrell may not be.

Amoris Laetitia was issued on April 8.  Our guidelines were actually ready by June 1, after consulting our Priests’ Council, Archdiocesan Pastoral Council, auxiliary bishops, seminary faculty, and a variety of liturgical, canonical and theological experts, both lay and clergy — all of whom made excellent suggestions.  We waited until July 1 to complete a final review.  Other bishops have issued their own guidelines and responses consistent with the circumstances of their dioceses, which only they, as local bishops, know with real intimacy.

I wonder if Cardinal-designate Farrell actually read and understood the Philadelphia guidelines he seems to be questioning.  The guidelines have a clear emphasis on mercy and compassion  This makes sense because individual circumstances are often complex.  Life is messy.  But mercy and compassion cannot be separated from truth and remain legitimate virtues.  The Church cannot contradict or circumvent Scripture and her own magisterium without invalidating her mission.  This should be obvious.  The words of Jesus himself are very direct and radical on the matter of divorce.

I think every bishop in the United States feels a special fidelity to Pope Francis as Holy Father.  We live that fidelity by doing the work we were ordained to do as bishops.  Under canon law — not to mention common sense — governance of a diocese belongs to the local bishop as a successor of the apostles, not to a conference, though bishops’ conferences can often provide a valuable forum for discussion.  As a former resident bishop, the cardinal-designate surely knows this, which makes his comments all the more puzzling in the light of our commitment to fraternal collegiality.

NEXT: ‘Faith is touchstone of everything’ CRS does, says agency’s outgoing CEO