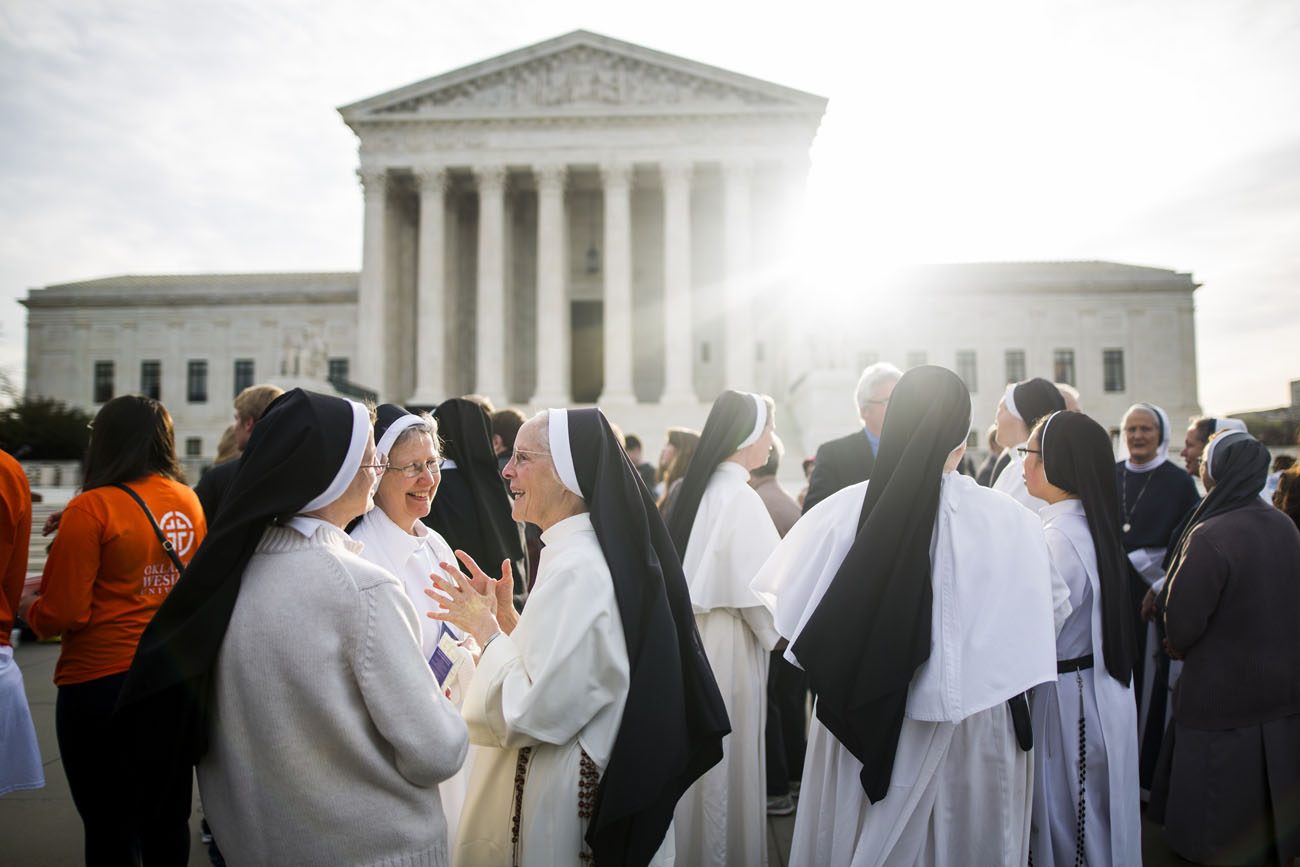 WASHINGTON (CNS) — The Little Sisters of the Poor and other religious employers that challenged the contraceptive mandate of the Affordable Care Act have been cautiously breathing a sigh of relief since the presidential election.

“Everyone is still protected by the Supreme Court’s order,” but they know with a new administration it could change in minutes,” said Mark Rienzi, lead attorney for the Becket Fund for Religious Liberty, which represented the Little Sisters of the Poor in the case before the court earlier this year.

And even though nothing has been announced yet, Rienzi seems confident Donald Trump’s campaign promises to repeal some or all of the Affordable Care Act would very likely put the contraceptive issue off the table.

“We feel optimistic,” he told Catholic News Service Nov. 22, stressing that a major part of Trump’s victory stemmed from religious voters convinced he would best represent them with pro-life policies and Supreme Court nominee picks.

The court heard oral arguments in the case March 23. In a unanimous decision May 16, the justices sent the matter back to the lower courts for the parties to work out a compromise. The court also has ordered the government not to impose on the plaintiffs hefty fines it has set up for noncompliance with the mandate.

“The previous administration went aggressively too far in bullying religious groups,” he added, saying people supported Trump over Hillary Clinton specifically for his “promises to do things for religious liberty.”

Rienzi also said he hoped that Trump, whom he described as “a practical man and a businessman” would recognize there is no need for the government “to be fighting the Little Sisters of the Poor” and should be able to work out a reasonable solution.

“I’m optimistic he will do what he was sent to do,” Rienzi added.

Cardinal Daniel N. DiNardo of Galveston-Houston, president of the U.S. Conference of Catholic Bishops, expressed similar hope of working out this issue with the new administration.

A week after the election he told reporters at the bishops’ fall general assembly in Baltimore that although he wasn’t sure what the Trump administration would do, he hoped “we can sit down with the administration or meet with them in some fashion, perhaps even in terms of Congress, relative to some pro-life things. I would certainly think some aspects of the Affordable Care Act would be great if we could sit down and see them worked out, relative to, let’s say, the Little Sisters of the Poor, and analogous things.”

The Little Sisters of the Poor is just one group involved in the case before the court, although the religious order has become synonymous with the entire argument challenging the Affordable Care Act’s requirement that employers cover contraceptives in their employee health plans despite their moral objections to such coverage.

The case of Zubik v. Burwell also involves Priests for Life, the Pennsylvania dioceses of Pittsburgh and Erie, and the Archdiocese of Washington and other religious groups who did not fit the narrow exemption to the contraceptive mandate given to churches.

In mid-May, the Supreme Court sent the cases back to the lower courts, which cleared the slate from their previous court rulings when five appeals courts had ruled in favor of the contraceptive mandate and one ruled against it.

Although the Supreme Court justices expressed hoped that both sides might be able to work out a compromise, that has not happened. Instead, lawyers for both sides have applied for extended deadlines in negotiations in eight separate federal appeals courts.

Legal analyst Lyle Denniston, longtime writer for a blog on the Supreme Court who is now writing for National Constitution Center, wrote in mid-November that 20 cases are awaiting word on whether the two sides can come to an agreement. He also noted that federal government officials have told appeals courts that they are still processing the public comments on possible changes in the mandate.

He noted the new administration will not be able to simply do away with the mandate by presidential order because binding regulations are in place that determine when a religious employer is exempt from having to provide contraceptives to its employees or to students attending religious colleges.

If there is to be a change, new regulations will have to be written and then submitted to the public for comment for 60 days or more, he said.

Since the health law falls under the Department of Health and Human Services, many are looking at Trump’s potential pick to head that agency. Signs are currently pointing to Rep. Tom Price, R-Georgia, who has spoken of repealing the Affordable Care Act or at least its contraception mandate.

Another factor in the mix, should these cases find their way back to the Supreme Court, is that Trump will be nominating a candidate to fill the vacant ninth seat, held by the late Justice Antonin Scalia, and he has stated that he would pick a conservative justice.

Two judges on his list of potential nominees: Timothy Tymkovich and Neil Gorsuch, serve on the U.S. Court of Appeals for the 10th Circuit, and both had voted in favor of — but were outnumbered– reconsidering an exemption to a contraceptive mandate case last year.

The two were part of a dissenting opinion that said: “The issue is not just about access to birth control services, but a core question about religious freedom to decide what one’s own faith principles are.”

PREVIOUS: At Thanksgiving, Americans ‘united in debt we owe to God,’ say prelates

NEXT: Life lost, church and other buildings damaged in natural gas explosion