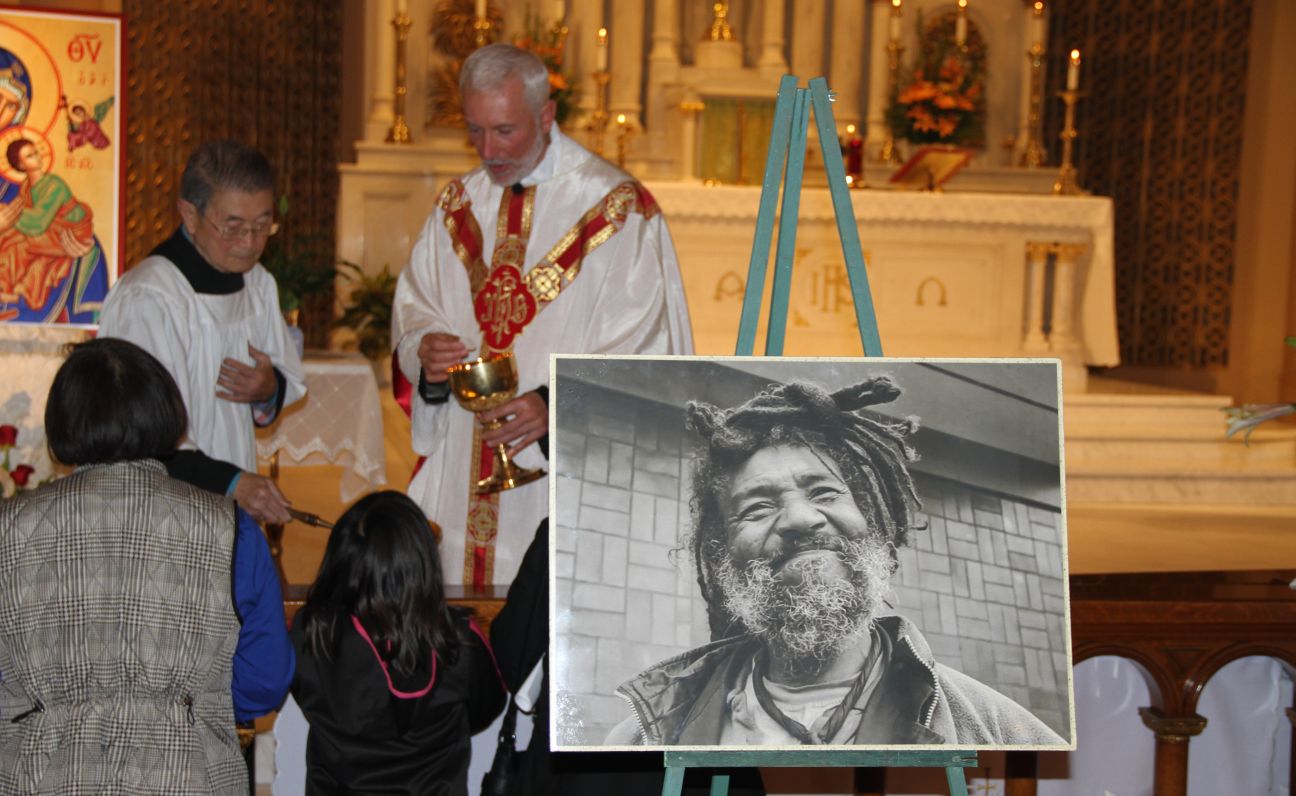 Mourners line the altar rail to receive Communion from Father Joseph Illo, pastor of Star of the Sea Church in San Francisco, during a Nov. 7 funeral Mass for Thomas Myron Hooker, a homeless man beloved by the community and pictured in a portrait near the altar. (CNS photo/Christina Gray, Catholic San Francisco)

SAN FRANCISCO (CNS) — Thomas Myron Hooker lived the last 20 years of his life without a roof over his head, but his death proved he was hardly without a home.

Hundreds of people — church families, neighbors, shopkeepers and perhaps even strangers touched by the cheerful kindness and generosity of the man who for years had made camp under a tarp on a street corner in San Francisco’s Richmond District — streamed into Star of the Sea Catholic Church Nov. 7 to express their respect and affection.

Hooker had endeared himself to the parish and surrounding community with his gentle spirit. He spent a part of each day praying in the back pews, said Star of the Sea pastor Father Joseph Illo, who eulogized him as “a kind of patron saint of the homeless.”

“The meaning of being homeless beyond shelter is when you lack a home, lack a family who understands you. You are homeless when you don’t feel you belong anywhere,” said Father Illo. “Many of us who live in more comfort are more homeless than Thomas was. He had a home with us.”

Thomas had “overcome his homelessness,” said Father Illo, who claimed Hooker’s body after his death Oct. 26 and planned the funeral Mass and reception that followed. McAvoy O’Hara & Evergreen Mortuary donated a casket and prepared the body for burial. A special collection was taken during the Mass so that Hooker might be laid to rest with dignity and a headstone at Holy Cross Cemetery in Colma.

According to a Richmond District blog, Hooker was originally from Trinidad and had spent time in Chicago before coming to San Francisco.

Every day, Hooker worked his way along Clement Street with his shopping cart, and would stand at a corner near Walgreens, usually talking to himself.

“This was a man who never asked for anything,” Lea Grey Dimond, owner of Thidwick Books on Clement Street, told Catholic San Francisco, the archdiocesan newspaper.

Hooker was one of three individuals profiled in a documentary about mental illness called “Voices.” In the trailer for the documentary, Hooker says with a huge grin: “I suffer a lot, you know, and when you suffer, you must know to be kind.”

At a reception in the school gym following the funeral Mass for him, the community took turns sharing memories of Hooker and offering parting thoughts. “Voices” was shown afterward.

“Thomas had a gift for loving generously and unconditionally,” said one speaker. “He brought our community something rare and special.”

A man in tears said he was overcome by the overflowing crowd who had come out to honor Hooker. The tears turned to laughter when he confessed he often “gave my money to Thomas instead of the church.”

Star of the Sea parishioners Arnold and Jean Low had brought food to Hooker for more than 20 years and were the ones to find him unresponsive on the morning of his death.

“Thomas was a kind and friendly soul, always had a smile on his face, always had something complimentary to say to you,” said Arnold Low. “There are other homeless souls for you to reach out to.