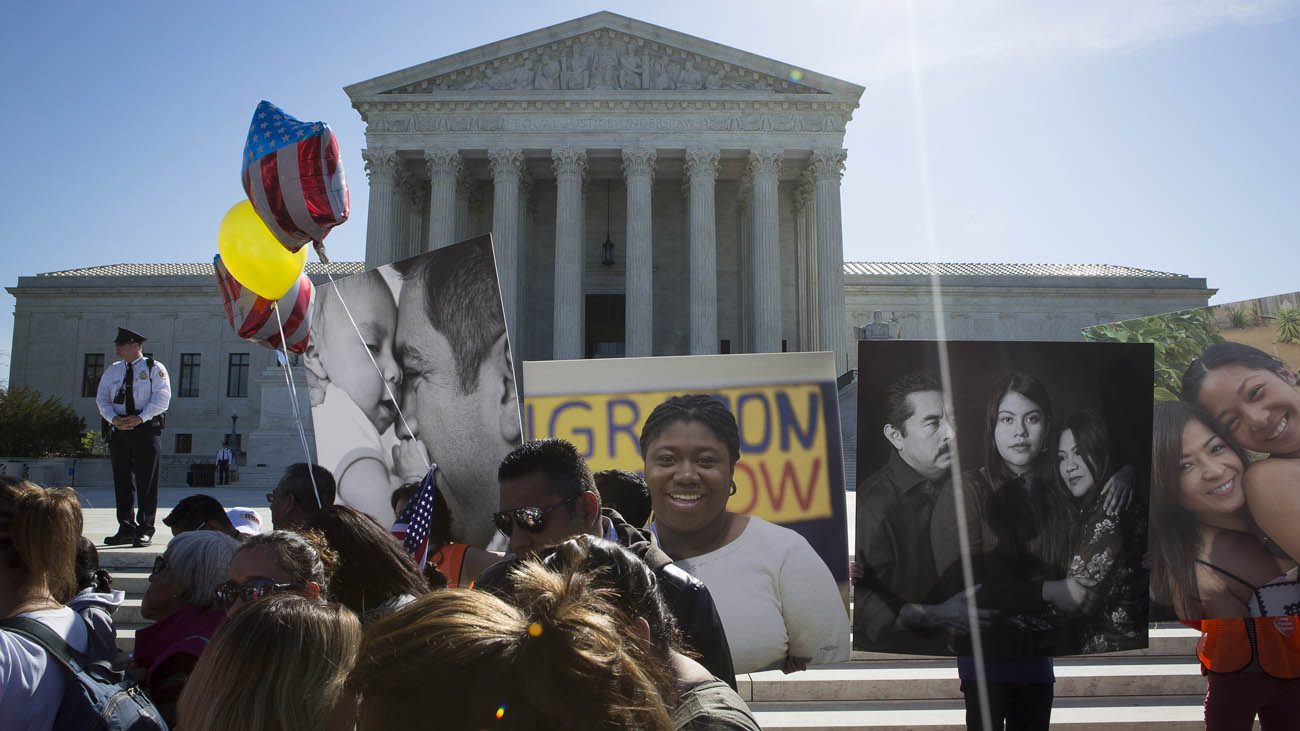 Supporters of the Deferred Action for Childhood Arrivals program, known as DACA, are seen outside the U.S. Supreme Court in Washington April 18. More than 70 presidents at Catholic colleges and universities have signed a statement pledging their support for students attending their schools who are legally protected by DACA. (CNS photo/Tyler Orsburn)

WASHINGTON (CNS) — More than 70 presidents at Catholic colleges and universities have signed a statement pledging their support for students attending their schools who are legally protected by the Deferred Action for Childhood Arrivals program, known as DACA.

The statement, posted Nov. 30 on the website of the Association of Catholic Colleges and Universities, says it hopes “the students in our communities who have qualified for DACA are able to continue their studies without interruption and that many more students in their situation will be welcome to contribute their talents to our campuses.”

President Barack Obama’s DACA program protects young immigrants brought into the United States by their parents as young children without legal permission. More than 720,000 of these young immigrants have been approved for the program, which protects them from deportation for two-year periods.

The college leaders’ statement also points out that “undocumented students need assistance in confronting legal and financial uncertainty and in managing the accompanying anxieties. We pledge to support these students — through our campus counseling and ministry support, through legal resources from those campuses with law schools and legal clinics and through whatever other services we may have at our disposal.”

The statement was released three weeks after the presidential election. During his campaign, President-elect Donald Trump promised to deport those who are in the country without legal permission; build a wall along the U.S.-Mexico border; and enact a ban on Muslims entering the country until a system for what he called “extreme vetting” of refugees is in place.

Trump also made promises during his campaign to undo what he called Obama’s “overreaching” executive orders including the president’s November 2014 expansion of his 2012 DACA program to allow more young immigrants people to benefit from its provisions that defer deportations and allow them to have work permits.

“Many of us count among our students young men and women who are undocumented, their families having fled violence and instability,” the presidents’ letter said, adding that these students have met the DACA criteria.

Signers of the letter represent large schools, like Villanova, which is outside Philadelphia, DePaul University in Chicago and The Catholic University of America in Washington, and small schools, like Anna Maria College in Paxton, Massachusetts, and Loras College in Dubuque, Iowa, and dozens of colleges in between. They include leaders who have been vocal in their support of students with DACA status such as Patricia McGuire, president of Trinity Washington University, and Jesuit Father Kevin Wildes, president of Loyola University New Orleans.

Many of the signers are presidents of Jesuit colleges and universities who signed a similar Nov. 30 statement issued by the Association of Jesuit Colleges and Universities that reiterated support for students who are in the United States without legal documents.

That statement, signed by 28 leaders, said: “We feel spiritually and morally compelled to raise a collective voice confirming our values and commitments as Americans and educators.”

The leaders pledged to continue working “to protect to the fullest extent of the law undocumented students on our campuses” and to promote retention of students with DACA status.

Several of the signers of both statements also signed a Nov. 21 letter with more than 400 college and university presidents from public and private institutions across the U.S. offering to meet with U.S. leaders on the issue of immigrant students and urging business, civic, religious and nonprofit sectors to join them in supporting DACA and undocumented immigrant students.

The letter from Catholic college and university presidents stressed that their schools “share a long history of educating students from a diverse array of socioeconomic, geographical and ethnic backgrounds, often welcoming those on society’s margins, especially immigrants and underprivileged populations.”

It also cited what Pope Francis said last year at the World Meeting of Families in Philadelphia when he welcomed many recent immigrants to the United States, pointing out that many of them came to the United States “at great personal cost, in the hope of building a new life.”

“Do not be discouraged by whatever hardships you face.” the pope told them. “I ask you not to forget that, like those who came here before you, you bring many gifts to this nation.”

John DeGioia, president of Georgetown University, who joined the statement with Jesuit college leaders, also sent a similar-themed message to members of the school community Nov. 29.

In the letter, he noted that he has been meeting with students, faculty and staff members from the university and “many of them have shared with me that they feel vulnerable and unsure about their futures or the futures of close friends and family.”

DeGioia stressed that Georgetown’s school community would continue to support the DACA program and “protect our undocumented students to the fullest extent of the law.”

“I wish to encourage each of us to recommit ourselves to supporting one another — to working together to do all that we can to ensure that our community is a place of deep care for each person, especially those who feel most vulnerable,” he wrote.

PREVIOUS: Hundreds mourn beloved homeless man at funeral for him at Catholic church

NEXT: Tennessee bishops asks for prayers, relief help for victims of wildfires