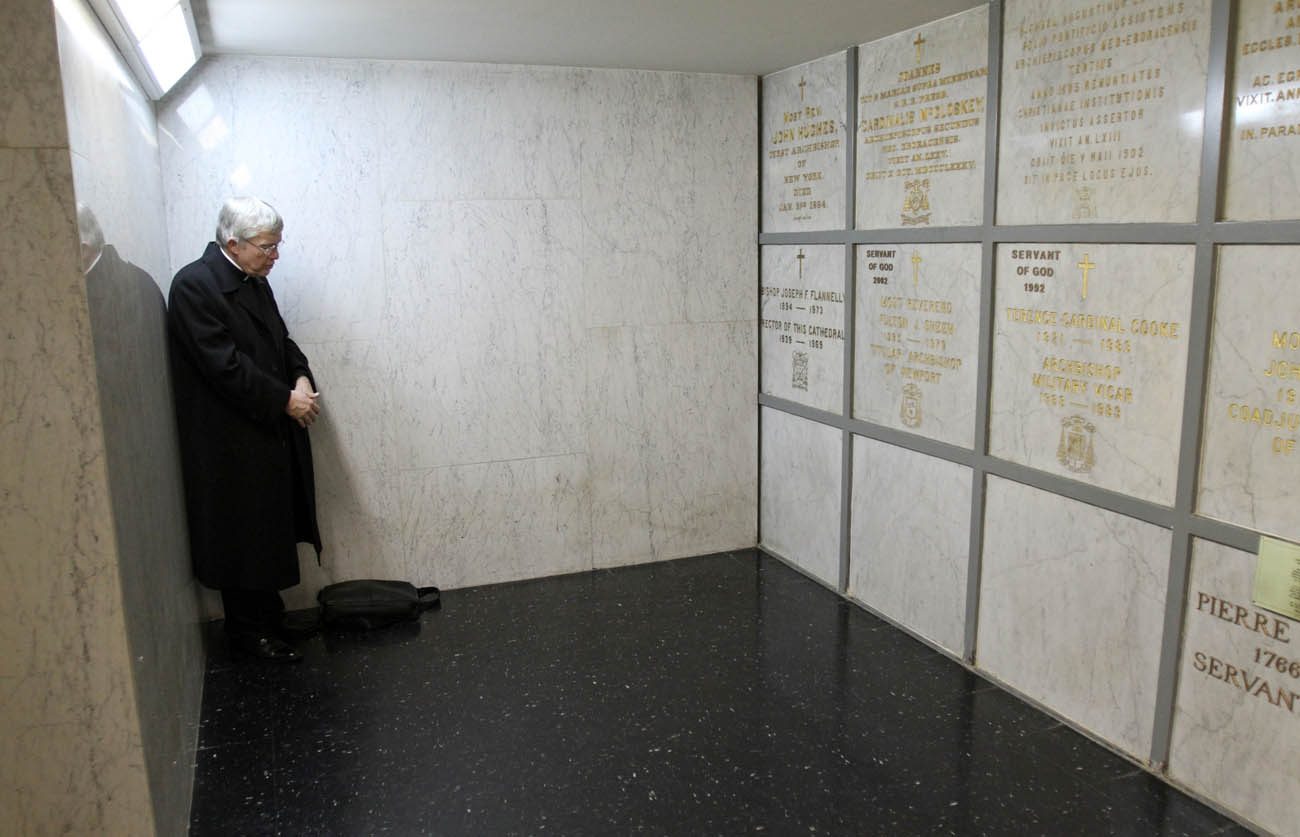 PEORIA, Ill. (CNS) — The Supreme Court of the State of New York ruled Nov. 17 in favor of the family of Archbishop Fulton J. Sheen regarding their request to allow the transfer of the sainthood candidate’s remains to Peoria, where he was raised and ordained a priest.

On Nov. 1, Manhattan Supreme Court Justice Arlene Bluth heard arguments in favor of the transfer from lawyers for Archbishop Sheen’s niece, Joan Sheen Cunningham, as well as those from the Archdiocese of New York, which sought to keep the remains of the famed orator and media pioneer at St. Patrick’s Cathedral in New York City, where he was entombed following his death on Dec. 9, 1979.

The Diocese of Peoria has been a promoter of Archbishop Sheen’s canonization cause for more than 14 years. The ruling is seen as a key factor in allowing his cause to move forward. There was no immediate response from the New York Archdiocese.

“The petitioner (Joan Sheen Cunningham) is granted the right to remove the remains of Archbishop Fulton J. Sheen from St. Patrick’s Cathedral in New York … to St. Mary’s Cathedral (in Peoria),” ruled Bluth at the close of a 10-page decision.

The court, she said, deferred to the wishes of the family “because petitioner has set forth a justifiable, good, and substantial reason for moving the remains.”

Among the reasons cited for disinterment is that the move will aid in the canonization process; that Archbishop Sheen’s parents are buried nearby in Peoria; and that St. Mary’s Cathedral is where Archbishop Sheen was ordained a priest and a place he visited often during his lifetime.

Archbishop Sheen’s heroic virtue and life of sanctity were recognized in 2012 by Pope Benedict XVI, who granted him the title “Venerable.” The Diocese of Peoria has said that, with progress already made in the cause and pending the approval of Pope Francis, a beatification could be celebrated in the near future after the arrival of the remains at St. Mary’s Cathedral, where a crypt is being prepared for his re-interment.

“It is our intention to begin working with the Archdiocese of New York to make this process happen as soon as possible,” according to a statement from the Diocese of Peoria.

The future archbishop was born May 8, 1885, in El Paso to Delia and Newt Sheen and was the oldest of four sons. Though he was known as Fulton, his mother’s maiden name, he was baptized as Peter John Sheen.

The family moved to Peoria so that Fulton and his brothers could attend St. Mary Cathedral Grade School and Spalding Institute. Fulton made his first Communion at the cathedral and was a regular altar server in the sanctuary.

At his Sept. 20, 1919, ordination, then-Father Sheen consecrated his priesthood to Mary before a statue of Our Lady that is still revered in the cathedral. After completing his advanced studies in Europe, he returned to priestly ministry in Peoria until his bishop released him to teach at The Catholic University of America in Washington where he remained on the faculty for nearly 30 years.

Archbishop Sheen was a pioneer in radio and television. He already was famous for his radio addresses on “The Catholic Hour” when he became national director of the Propagation of the Faith in 1950, a post he held till 1966. That period that overlapped with his popular national television broadcasts of the 1950s. He won the 1951 Emmy for outstanding television personality for his show “Life Is Worth Living.”

He was an auxiliary bishop of the New York Archdiocese from 1951 to 1966, then was bishop of Rochester, New York, from 1966 to 1969. He was given the personal title of archbishop when he retired from that diocesan post and moved back to New York. He spent his final years preaching retreats and missions.

Archbishop Sheen wrote dozens of books, including his autobiography: “Treasure in Clay.”

In 2011, the diocese submitted the case of a child, born without heartbeat or respiration, who revived after 61 minutes through the intercession of Archbishop Sheen. In 2012, Pope Benedict XVI declared Archbishop Sheen “venerable,” meaning he lived a life of heroic virtues. The next steps would be beatification and canonization.

In general two miracles are needed for sainthood — one for beatification and the second for canonization.

If the case of the child is deemed by the Vatican to be a miracle that occurred through the intercession of Archbishop Sheen, officials in the Peoria Diocese said his beatification would take place in Peoria.

Dermody is editor-in-chief of The Catholic Post, newspaper of the Diocese of Peoria.

NEXT: Bishops optimistic dialogue with Iranian religious leaders can lead to peace