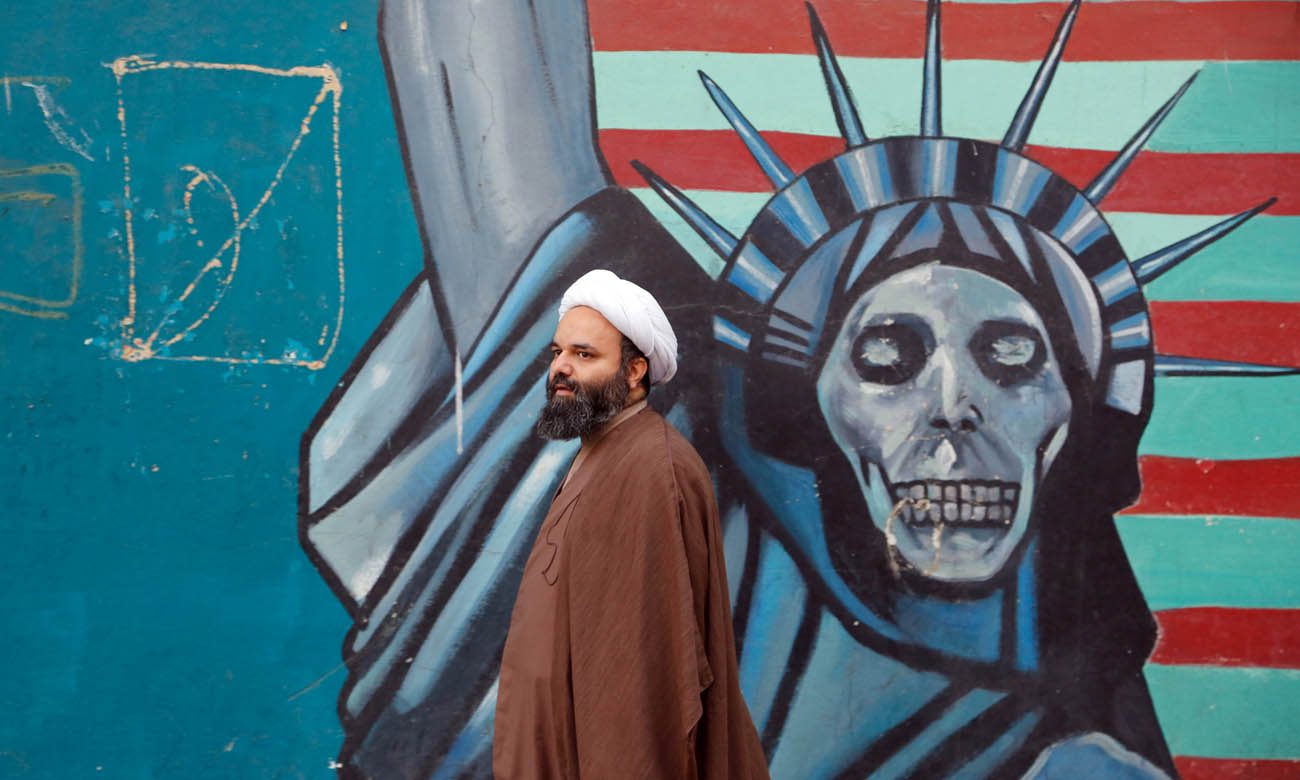 An Iranian cleric walks next to an anti-U.S. mural in Tehran Nov. 3. (CNS photo/Abedin Taherkenareh, EPA)

WASHINGTON (CNS) — Three Catholic bishops said they learned that they share common values with the Iranian religious leaders they have met and hope to better understand the differences they hold in future conversations.

The bishops recounted their experiences from two meetings — in Iran in 2014 and at the Vatican in June at the behest of Pope Francis — during a program Nov. 17 at the Carnegie Endowment for International Peace in Washington.

“The nature of our trip there was to try to see if we as religious leaders could help create better relations between our two countries. We didn’t think that we had a master plan or anything to bring this about. When people engage in dialogue and get to know each other, you grow from that relationship,” Bishop Madden told the audience.

Bishops Pates and Madden, who made the original trip to Iran, described visits to schools and institutions and meeting everyday Iranians during their visit, recounting how friendly and welcoming the Iranians were in spontaneous encounters.

Bishops Cantu and Madden said the meetings stem from Pope Francis’ call to create a culture of encounter with the world to achieve understanding and build peace.

“As religious leaders we have to lift up the importance of encounter, particularly with people with whom we disagree, to look at those points of convergence. We never would have discovered those had we not sat down at the table in dialogue. And we move from that,” Bishop Cantu said.

Bishop Pates said that the Iranian religious leaders were hopeful that the dialogue “would enable them as a religious community to have an impact on their own government and the Revolutionary Guard.”

“There was not a clear set understanding about the American perspective and where we’re coming from, what we’re all about from their leadership also,” Bishop Pates said.

Likewise, he added, the American bishops hoped they could influence the U.S. government in its relationship with Iranian leaders.

“We have to make our position known, not to backtrack, and to show the value,” he said. “If we believe our position is important and valuable, then we have to speak up.”

Bishop Pates also described a “little bit of a chasm” that exists between the countries because of past U.S. actions. He cited the Central Intelligence Agency-assisted coup in 1953 that brought down Iran’s democratically elected government in favor of strengthening the monarchical rule of Mohammad Reza Pahlavi; U.S. support for Iraq in a protracted war with Iran from 1980 to 1988 in which more than 1 million Iranians died; and the implementation of sanctions that hurt average people far more than the Iranian government because of its nuclear development program.

All three bishops said the issue of sanctions was repeatedly addressed by the Iranians, who cited examples of a shortage of what normally are readily available drugs to treat cancer and other maladies and limits on access to international trade.

The sanctions slowly are being lifted under the Joint Comprehensive Plan of Action reached in July 2015 to ensure that Iran’s nuclear program will be exclusively peaceful, but not as quickly as the religious leaders think should be occurring, Bishop Cantu said.

“Sanctions are generally sold to the public that this is a punishment or a pressure on the government,” Bishop Cantu explained. “That’s how the sanctions with Cuba have always been sold by proponents. But having been to Cuba before the sanctions were lifted, it wasn’t the government that was hurt. It was the common person in society. Obviously, listening to some of these stories, that was the case in Iran.”

The introductory meeting led to a second gathering at the Vatican, which Bishop Cantu also attended. The conversation in June focused on the use of force and terrorism. The parties agreed that the development and use of weapons of mass destruction, including chemical and nuclear weapons, and acts of terrorism are immoral because they pose significant danger to civilians.

The June meeting led to a joint declaration in August that reflected those concerns as well as rhetoric that assigns blame for terrorist acts to an entire religion.

The declaration was signed by Bishop Cantu, who chairs the U.S. bishops’ Committee on International Justice and Peace; Cardinal Theodore E. McCarrick, retired archbishop of Washington and a committee member; Ayatollah Ali-Reza A’arafi, director of seminaries in Iran and senior member of Iran’s Supreme Council of the Society of Qom Seminar Scholars; and Abdul-Majid Hakim-Elahi, director of the International Affairs Office of the society.

Bishop Pates expressed hope that the initial steps taken by Iranian and U.S. Catholic leaders would serve as a model for other challenges facing the world, including the status of Syrian refugees fleeing civil war.

The bishops admitted that they have been criticized at times for their meetings with the Iranians. Bishop Madden called some of the correspondence he has received “hate mail.” None of the three said, however, that the criticisms would deter them from being involved in future meetings and hope that they eventually can host the Iranian leaders in the U.S.

“I think we’ve established trust,” Bishop Pates added. “We don’t want to go back to this relationship of fear.”

NEXT: Chef stays cool as a cucumber turning out 4,500 meals daily