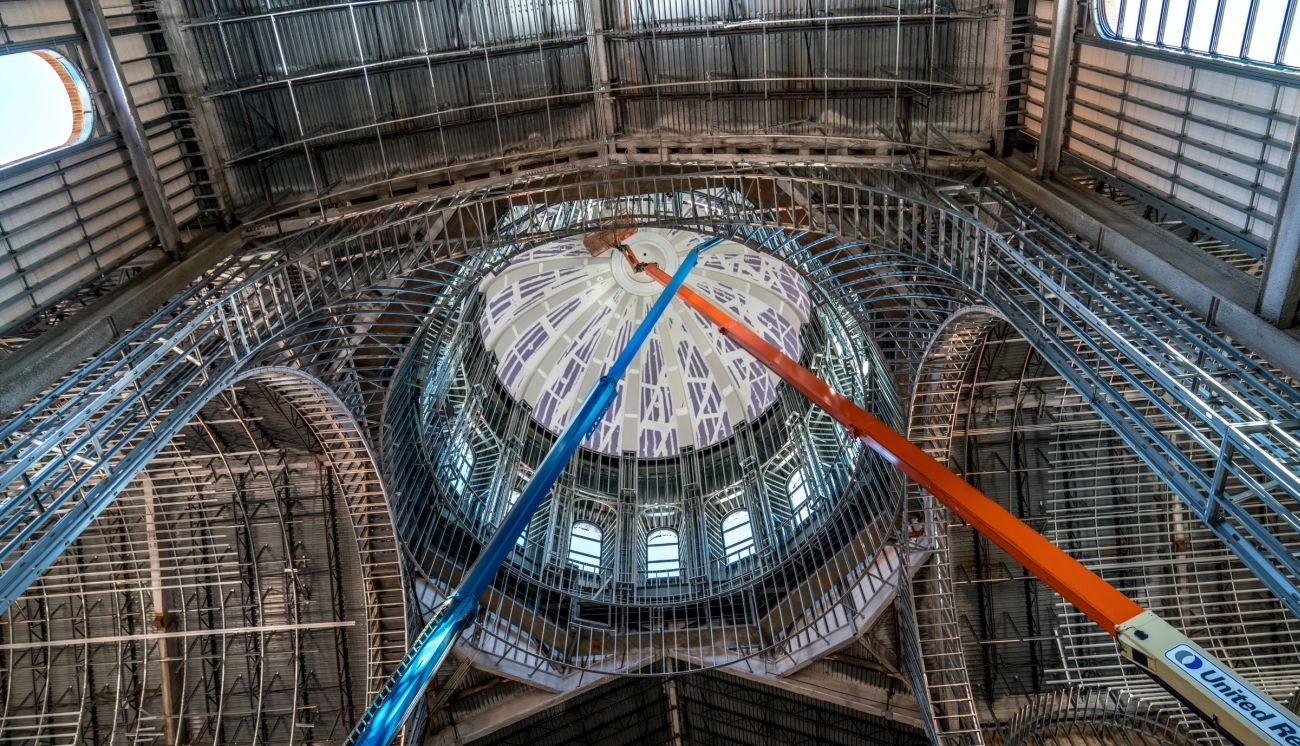 Construction progresses Sept. 21 on the new Holy Name of Jesus Cathedral in Raleigh, N.C., expected to be completed by the middle of 2017. (CNS photo/courtesy Diocese of Raleigh, N.C.)

RALEIGH, N.C. (CNS) — Michael Accurso wondered what was going on. He received an email inviting him to a meeting, but there were no details about the topic. Only a day and time.

“Of course the first thing to go through my head was, ‘I’m being asked to meet with the bishop and the vicar general and he doesn’t say why … am I in trouble?'” he laughed.

Turned out he wasn’t in trouble. Instead, he was tasked with a special project: to compose an original hymn for the dedication Mass of Holy Name of Jesus Cathedral.

It has been eight months since Msgr. David D. Brockman and Bishop Michael F. Burbidge talked with Accurso, director of sacred music, about the hymn. During that time, he composed — mostly on a piano or organ. He often worked at Sacred Heart Cathedral or his home. He read text from the Magnificat and psalms — examining text that emphasized the name of Jesus and the house of God.

Ultimately, he chose Psalm 145 — “I will praise your name forever my king and my God” — for its relationship to the cathedral’s name and historical significance.

“Once I had the text selected, I surveyed as many great hymns as I could. YouTube was a great resource,” Accurso told NC Catholics, the magazine of the Raleigh Diocese. “There is a video called ‘Three Hours of the Greatest Traditional Hymns of All Time.’ I reflected on the music of these hymns, what makes them so beloved and memorable and how I could incorporate those elements in my own composition.”

A fascinating detail emerged, he said. Many beloved hymns, such as “All Glory, Laud, and Honor and Praise to the Lord,” contain the same melodic element: an ascending perfect fifth.

“I realized that the use of this interval goes back even further, to Gregorian chant repertoire, some of which is more than a thousand years old,” Accurso said. “I began with this interval, and the rest of the melody almost wrote itself. I very intentionally emphasized the word ‘forever’ by using a similar rising interval again on this word, to demonstrate that the building of this Cathedral will impact the church in North Carolina for generations to come.”

The Diocese of Raleigh’s new Holy Name of Jesus Cathedral will seat more than 2,000 and will be dedicated July 26, 2017.

“I Will Praise Your Name Forever” is a congregational hymn that Accurso composed with a procession in mind, reflecting the solemnity and importance of the occasion.

It has been translated into languages representing communities in the Diocese of Raleigh: English, French, Igbo, Korean, Spanish, Swahili, Tagalog and Vietnamese.

It’s scored traditionally for organ, choir and brass. But Accurso hopes that the musical groups of the diocese will take the hymn and make it their own, incorporating instruments and styles from their traditions.

Turgeon Watson is editor of NC Catholics, the magazine of the Diocese of Raleigh.

PREVIOUS: Before being called to serve church, Kansas clergy served in armed forces

NEXT: Friends, colleagues describe Archbishop Byrnes as ‘man led by the Spirit’