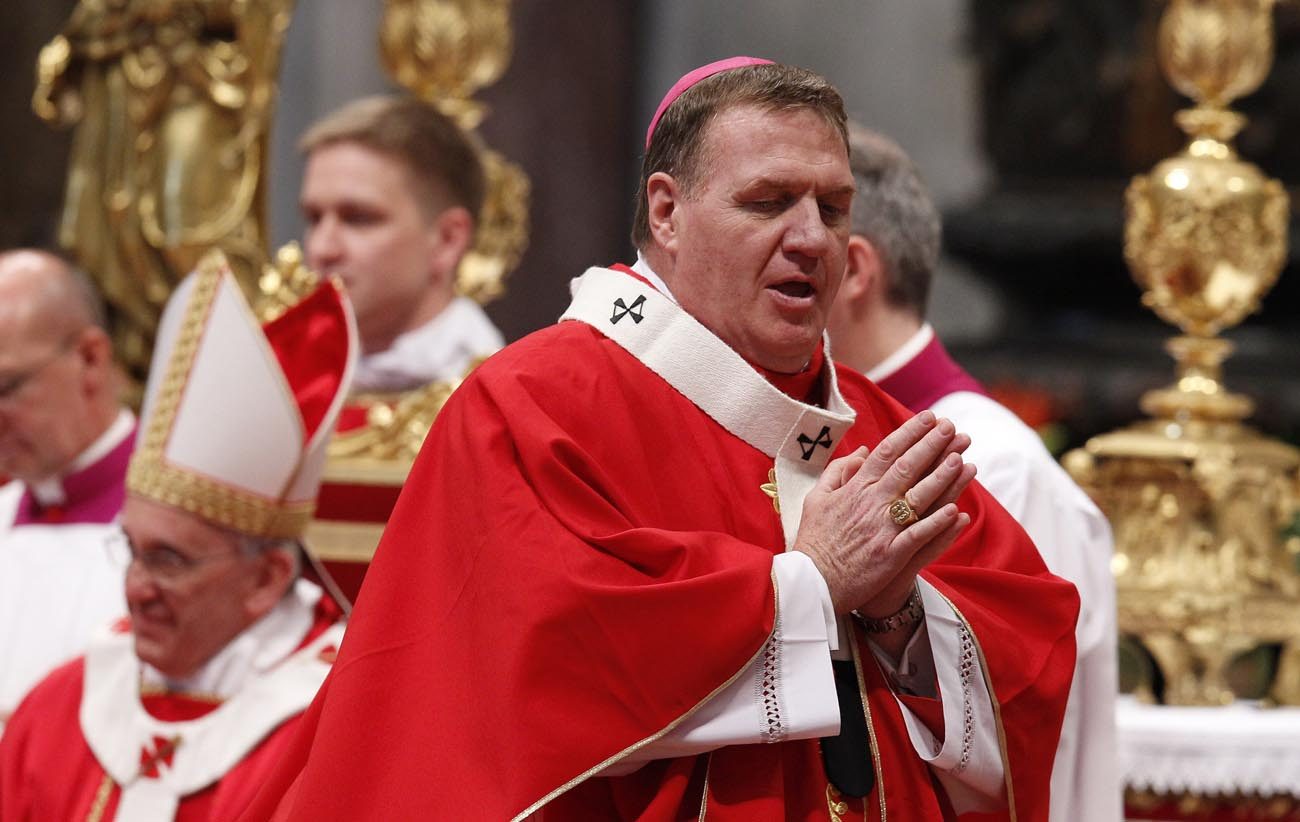 Cardinal-designate Joseph W. Tobin of Indianapolis is pictured in a 2013 photo at the Vatican. Pope Francis has accepted the resignation of Archbishop John J. Myers of Newark, N.J., and named Cardinal-designate Tobin to succeed him. (CNS photo/Paul Haring)

Archbishop Myers, Newark’s archbishop since 2001, is 75, the age at which canon law requires bishops to turn in their resignation to the pope.

The 64-year-old cardinal-designate, who is a member of the Redemptorist order, has been the archbishop of Indianapolis since 2012 and was named a new cardinal by Pope Francis Oct. 9. He also is former archbishop-secretary of the Vatican Congregation for Institutes of Consecrated Life and Societies of Apostolic Life. As secretary, he was credited with helping change the tone of a Vatican-ordered apostolic visitation of U.S. women’s religious communities from an investigation into a dialogue.

The changes were announced in Washington Nov. 7 by Archbishop Christophe Pierre, apostolic nuncio to the United States.

The cardinal-designate will be installed as the sixth archbishop of Newark Jan. 6.

When then-Archbishop Tobin was announced as one of the 17 new cardinals named by the pope and to be inducted into the College of Cardinals Nov. 19, he tweeted this simple message: “I am shocked beyond words by the decision of the Holy Father. Please pray for me.” He said in a statement he had “come to love deeply” the Catholics in central and southern Indiana and was blessed with friendships with civic and religious leaders in the state.

In a Nov. 7 statement about his appointment to Newark, Cardinal-designate Tobin said that one of his favorite descriptions “of the experience of faith is ‘a willingness to be surprised by God.’ By that standard, the last weeks have been exceptionally ‘faith-filled.'”

He said “the first jolt” came when Pope Francis named him a cardinal and the “second tremor” was the Oct. 22 call he received from Archbishop Pierre that the pope would be naming him to be archbishop of Newark.

“Receiving that second shock, I immediately thought of you, the people of this great Archdiocese (of Indianapolis) whose pastoral care was entrusted to me four years ago,” he said. “I remembered how you welcomed me, offered your support in so many ways, forgave my mistakes and limitations and always assured me of your love and the precious backing of your prayer.

“The thought of leaving you devastated me. I have had many sleepless nights and shed more than a few tears.”

Cardinal-designate Tobin said he has always understood his vocation “as that of a missionary disciple, one whom Jesus called to be with him so that he might send me out to preach and heal. Becoming your archbishop, I realized that this missionary also had to become a pastor,” following the model of Jesus as the Good Shepherd.

“Now, Pope Francis has asked me to become a missionary disciple and pastor in another local church. I hope that you will commission me — send me forth with your blessing to preach and heal in the Archdiocese of Newark. I know that I will leave a considerable chunk of my heart here in the Catholic communities of central and southern Indiana. I trust that God will fill that void with overflowing gratitude for the gift of sharing a portion of the pilgrimage with you.”

He noted that the Indianapolis Archdiocese had already planned a special celebration Dec. 3 to celebrate the feast of its patron, St. Francis Xavier, and “to ask a blessing on a new cardinal.” “Now, that celebration will also be a moment for us to say goodbye in faith,” he said.

In Newark at a news conference at the Cathedral Basilica of the Sacred Heart, Archbishop Myers introduced Cardinal-designate Tobin, saying the state of New Jersey and the people of the four-county archdiocese “are very happy to welcome him.” He said the cardinal-designate will find that the archdiocese’s 1.5 million Catholics “are rich in faith, have a great love for the church,” and live and share the Gospel.

In his remarks, Cardinal-designate Tobin said that with being named a cardinal and now the head of the Newark Archdiocese, “I’m not sure my central nervous system could take much more news.” He reiterated his love for the people of central and southern Indiana, adding it will be hard to leave them. But as he said in his statement released in Indianapolis, “God has called me to live my baptism as a missionary disciple … sent forth to preach.”

He said when he was named to Indianapolis four years ago, he had “to fend off the dreaded ‘v’ question — ‘What is your vision for the archdiocese?'”

“I don’t have a vision right now for Newark. With the help of the Holy Spirit we will have one,” he said, adding that he did not intended to offer a plan at the news conference “but to share convictions. principles that will guide my ministry forward … to respond in love of God, who loved us first.”

One of those principles, he said, will be “to encourage the journey of all” in the Newark Archdiocese “to ever greater love, knowledge and faith in Christ.”

Last December, Cardinal-designate Tobin made national news by defending the decision of his archdiocese to resettle a Syrian refugee family through the archdiocese’s Catholic Charities agency — a decision that went against Indiana Gov. Mike Pence’s ban on resettling Syrian refugees in the state.

A native of Detroit, the cardinal-designate is the oldest of 13 children.

Archbishop Myers, who was born in Earlville, Illinois, was ordained to the priesthood for the Diocese of Peoria, Illinois, Dec. 17, 1966. On July 24, 2001, he was appointed the fifth archbishop of Newark and was installed Oct. 9, 2001.

In June 2015, Newark’s coadjutor, Archbishop Bernard A. Hebda, was named by Pope Francis to be apostolic administrator of the Archdiocese of St. Paul and Minneapolis. He was installed as head of the archdiocese in May of this year.

The Archdiocese of Newark covers just over 500 square miles. Out of a total population of 2.86 million people, about 1.5 million are Catholic.