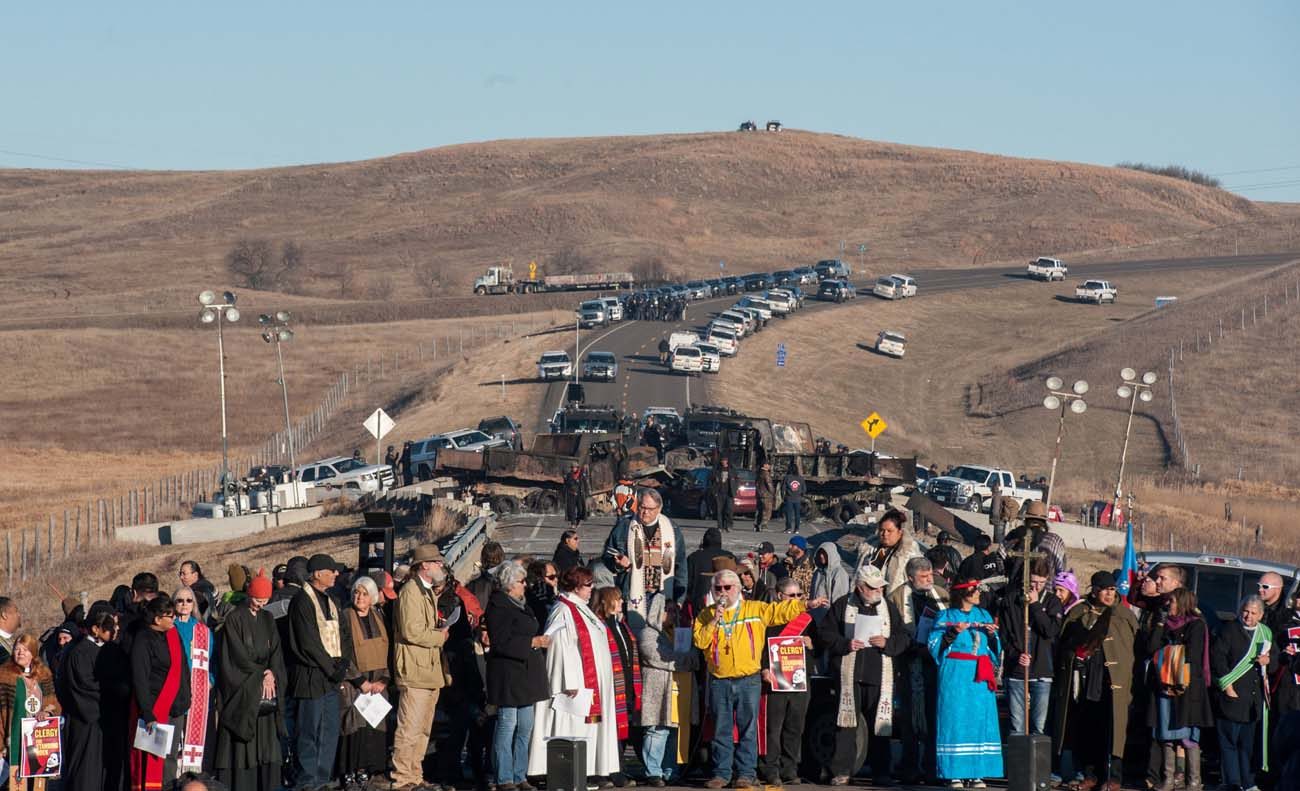 Clergy of many faiths from across the United States participate in a prayer circle Nov. 3 in front of a bridge in Standing Rock, N.D., where demonstrators confront police during a protest of the Dakota Access pipeline. Demonstrations against the pipeline are taking place on the Standing Rock Indian Reservation near Cannonball, N.D. (CNS photo/Stephanie Keith, Reuters)

WASHINGTON (CNS) — When Sisters Aine O’Connor and Kathleen Erickson heard a call for a peaceful and prayerful presence on the front line of a campaign to protect sacred Sioux lands in North Dakota from a multibillion-dollar oil pipeline project, they knew they had to respond.

The two members of the Sisters of Mercy of the Americas joined more than 500 ministers and religious leaders Nov. 4 for a day of prayer and conversation in south central North Dakota to confront what they contend is an ecological disaster waiting to happen.

“I was responding to the call to come and bear witness,” Sister O’Connor told Catholic News Service Nov. 4 as she prepared to return home to Baltimore.

Sister Erickson said that as a native of North Dakota who now ministers to migrant people in Omaha, Nebraska, she wanted to be on hand to stand with people whose rights are often ignored.

They were joined by Mike Poulin, a member of the Sisters of Mercy Justice Team’s West-Midwest region.

The call to which the trio responded came in late October from the Rev. John Floberg, an Episcopal priest serving the Standing Rock Reservation near Cannon Ball, North Dakota. He was concerned that violence was rising after two heavy trucks were set ablaze Oct. 28 following the forced removal of pipeline opponents by law enforcement authorities from a nearby camp.

In issuing the call, Rev. Floberg said it was necessary for people of faith to show support for the Standing Rock Sioux people.

The Sioux tribe has been joined by other indigenous people and hundreds of supporters at a camp near the pipeline route for months. Calling themselves water protectors, the tribal members since April have opposed construction of a leg of the $3.8 billion Dakota Access Pipeline. They contend that the project endangers the reservation’s water supply and infringes on sacred tribal grounds.

Texas-based pipeline builder Energy Transfer Partners maintains that it is following strict safety standards in building the 1,200-mile pipeline that will connect with a distribution network in Illinois. The company said the project is nearly complete except for the leg being challenged.

The federal government decided in September to halt construction pending another round of review after a federal court judge denied a tribal motion to stop the project.

Both sisters said the North Dakota witness is about more than one pipeline project.

“I’m concerned about the fixation on the petroleum industry and what we seem to be willing to give up long-term in favor of short-term (energy) solutions,” Sister Erickson said.

Sister O’Connor cited the call of Pope Francis of care for the environment as a corporal work of mercy and the questions he raised on the economy in his encyclical “Laudato Si’, on Care for Our Common Home” as reasons for the world to question the continued investment in fossil fuel development.

“We as Sisters of Mercy, in addressing the critical concerns we’ve adopted, have been challenged ourselves to ask the question about the structural causes of injustice and how they’re all related,” she said.

The day of events included walking from the camp to a bridge, which remains blocked by the burned-out trucks. The Mercy trio said the group remained under the watchful eye of heavily equipped law enforcement officers as a helicopter flew overhead throughout the day.

Eddie Carmona, campaign director of LA RED of the PICO National Network, a faith-based group engaged in congregation-based community organizing, told CNS that a group of ministers met with tribal elders and learned that the tribe wanted to have the trucks moved so that emergency vehicles could reach the reservation more easily.

About 100 of the religious leaders then went by caravan to the North Dakota State Capitol in Bismarck, about 50 miles away. There they were met by heavily armed police, Carmona said. However, 14 clergy managed to enter the capitol and conducted a sit-in demanding to see Gov. Jack Dalrymple, forcing officials to shut it down. When they refused to leave, they were arrested for criminal trespass.

Those remaining marched to the nearby governor’s residence seeking an end to the pipeline project, eventually returning to the Standing Rock Camp, Carmona said.

The Sisters of Mercy of the Americas’ Extended Justice Team was one of 15 faith-based organizations that signed a statement supporting the stance of the Standing Rock Sioux Sept. 19.

While saying a fair and unbiased evaluation of pipeline construction was necessary by the federal government, the statement also called for adequate consultation with the tribe concerning the project.

Other Catholic organizations that signed on include Columban Center for Advocacy and Outreach, Franciscan Action Network, Leadership Conference of Women Religious and Maryknoll Office for Global Concerns.