Service dogs help some veterans cope with life after war 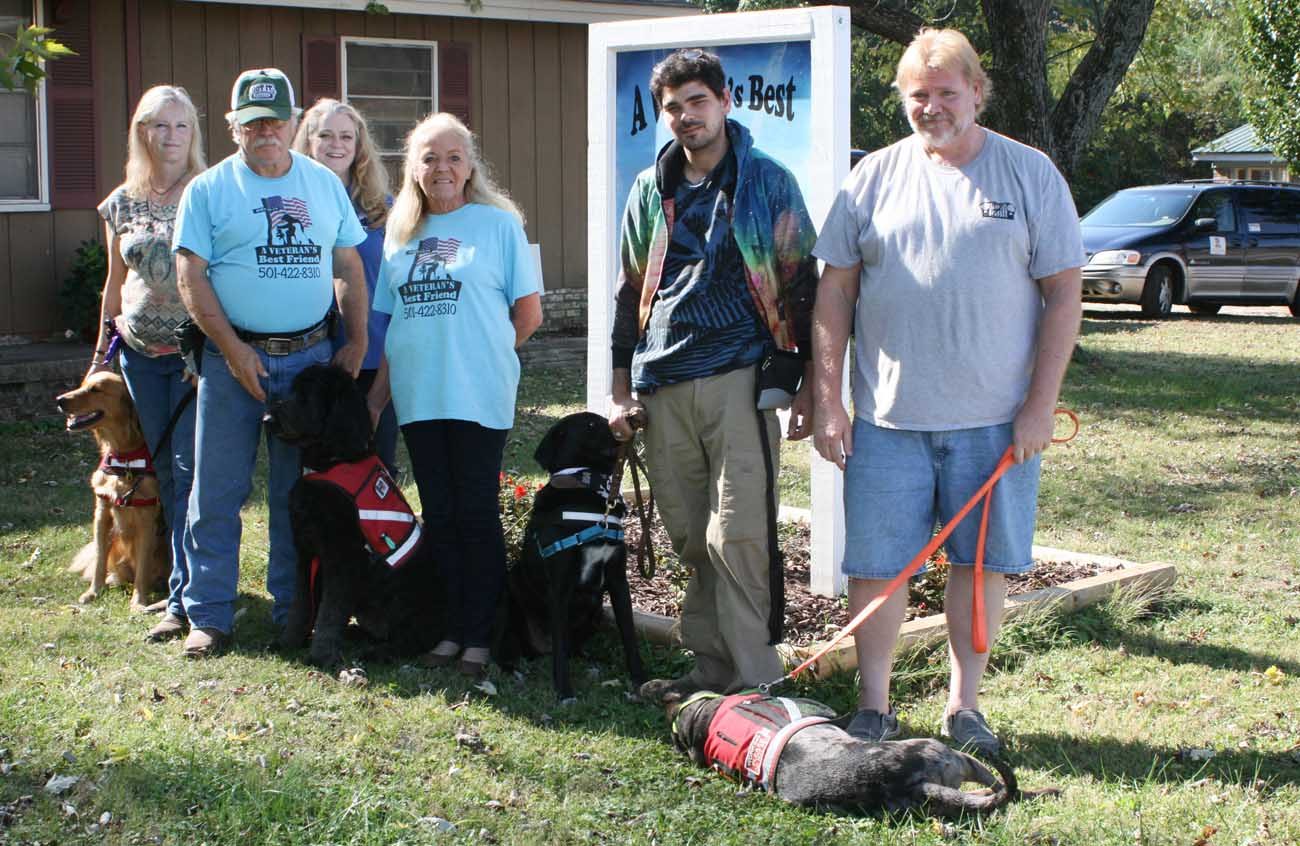 Volunteers at A Veteran's Best Friend in Cabot, Ark., pose for a photo with their dogs Oct. 28. The Christian nonprofit helps train service dogs for veterans with post-traumatic stress disorder or traumatic brain injury, at no cost to the veteran. (CNS photo/Aprille Hanson, Arkansas Catholic)

The young Catahoula mix plucked from a shelter already has all the love in the world for his new companion. But when Zack is wearing his vest he has a higher purpose — he is a service dog in training to help King cope with post-traumatic stress disorder and traumatic brain injury.

Before King got Zack three months ago, he almost became a statistic — about 20 American vets a day commit suicide, according to 2014 data from the Department of Veterans Affairs.

“I tried to commit suicide. I stepped out in front of a speeding vehicle and he just happened to stop short and it was a sheriff,” he said, adding he was taken to the hospital for help.

King, who was homeless, found A Veteran’s Best Friend, a volunteer nonprofit organization and Christian ministry that helps veterans by training service dogs for free through community and church donations and sponsorships of veterans. Volunteers keep the cost down to about $6,000 to $7,000 per dog.

Individuals or groups can pledge $25 a month to sponsor 12- to 18-months of training for a service dog and veteran. For many veterans like King, purchasing a service dog to help him cope with his PTSD and his brain injury, which can cost $20,000 or more, was out of the question.

“Somehow they found the absolute perfect dog for me,” said King, who has found housing through the VA Homeless Veterans program. “I have bad nightmares; I’ll talk and make noises. From the first night I had him, he’ll wake me up from a nightmare. He’ll stand there and poke me with his paw.”

The organization, based in Cabot, was founded in 2012 and has about 25 volunteers who assist with training and serve on the board of directors. There are currently nine veterans enrolled in the classes that meet once or twice a week depending on the stage in training to prepare the dogs with the necessary skills to serve their owners

All veterans accepted into the class must have doctor-diagnosed PTSD and go through an application and orientation process and home check. While most veterans are hands-on in the training sessions, some dogs are trained solely by volunteers.

Instead of buying from breeders, the volunteers search out shelter dogs or rescues from the Paws in Prison program, primarily Labrador and Retriever mixes, and put them through a series of preliminary tests to see if they have the demeanor and skills to make a good service dog. If a dog is adopted and does not work out as a service dog, the volunteers work to adopt them to a loving family.

At its core, the nonprofit exists to help veterans. But Frances Kirk, a U.S. Army veteran and parishioner at St. Jude Church in Jacksonville, will be the first to say that these dogs, including her lab mix Domino, are more than just working dogs. They are lifesavers and almost every volunteer within the organization has a story to tell about their four-legged companions.

“What the dogs do is give us hope,” Kirk told the Arkansas Catholic, newspaper of the Diocese of Little Rock. “They just give us hope and a chance at life again.”

Before the afternoon training session Oct. 28, veterans Kirk, Tyler Naramore, director of operations, Carrie Riley, director of logistics, and David Grimm, dog trainer and past principal at the former St. Patrick School in North Little Rock, shared their after-war stories about struggles with PTSD, everything from not wanting to leave the house for years to always finding the “PTSD seat” wherever they go — a seat with their back to the wall that has a full view of the exits.

Frances explained PTSD as a traumatic event or a series of events that have happened to a person and “their body and mind is stuck in that trauma. … They’re hyper-vigilant, scanning rooftops, hands” and are often forgetful, Kirk said.

Grimm, who served in Vietnam and Iraq for the U.S. Marines and Air Force, had stopped leaving the house and isolated himself so he wouldn’t have to hear “I understand” from those who couldn’t possibly understand.

“I’ve had people ask, ‘Why don’t you talk about your experiences?’ And my statement to them is I don’t want to put them through what I went through,” he said. “But since I have had Ringo, I get out. A year ago, you wouldn’t see me in a class like this, the room would be too confining. I’ve gone to some of my grandkids’ games, plays at school. I’m getting out more.”

Ringo, a 2-year-old Goldendoodle who was surrendered by his owner, is crucial to calming his fears out in public.

“I’d get really emotionally upset if somebody was behind me,” something he and other veterans in the program often struggle with, Grimm said. “So he’s trained to, if I’m standing some place, he’s looking behind me. I can be talking to you, but I still see him and he will move or alert and then I can see what is behind me.”

The dogs are trained to detect stress and will nuzzle, paw, cuddle or actually lead a person out of a place or situation if an anxiety attack is happening. Following Assistance Dogs International standards, the dogs must pass the Canine Good Citizens test, Public Access Test and specific training for PTSD tasks before certification.

“We admit pheromones when we’re stressed. They pick up on our stress pheromones and are like, ‘Hey, quit stressing,'” said Army veteran Chris Wilson, who does not yet have a dog.

Volunteers like Mardy and Audrey Jones, members of Christ the King Church in Little Rock, help foster and train dogs while they wait to be placed with a veteran. Much of the training revolves around putting the dogs in a variety of situations, locations and with various people and animals to get them accustomed to proper behavior. Although the Joneses are not veterans, they view this volunteer work as a service to God.

“The Bible can be confusing. But I can understand that I am to love. I am to love others and to love is to serve. And to be a service dog trainer, is to serve my fellow man and my dogs too,” Audrey Jones said. “One morning I was on my knees saying my prayer and I had one dog cuddled up over here and one dog cuddled up over here and it’s like, this is God telling me ‘good job.’ And then it’s like these dogs are God’s love with skin on.”

Hanson is associate editor at the Arkansas Catholic, newspaper of the Diocese of Little Rock.