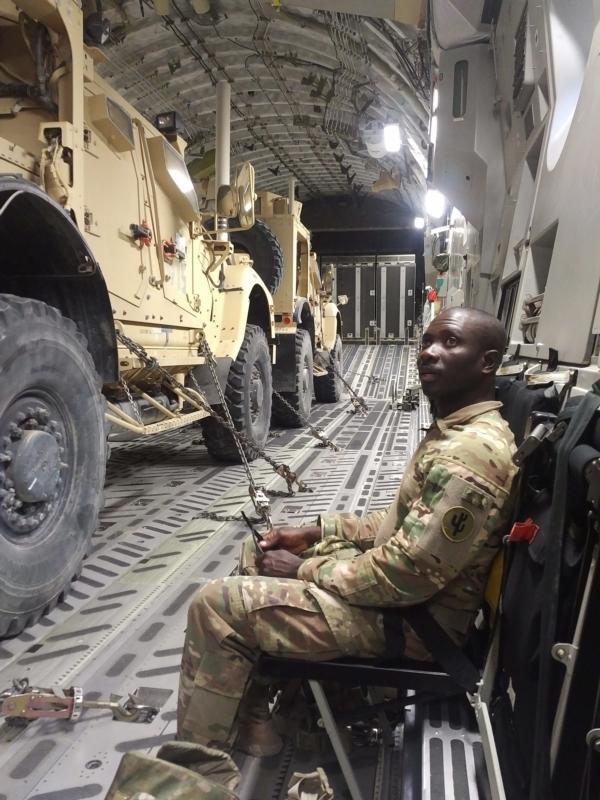 Father Charles Awotwi, a priest of the Diocese of Salina, Kan., is seen aboard a C-17 transport with the U.S. Army in this undated photo. He is currently a military chaplain serving with U.S. troops stationed in the Middle East. (CNS photo/courtesy The Register)

SALINA, Kan. (CNS) — Born in Ghana, West Africa, and ordained a priest in Salina, Father Charles Awotwi is currently serving troops in the Middle East as a chaplain with the U.S. Archdiocese for the Military Services.

“I take this time of deployment as a long retreat,” Father Awotwi wrote via email to The Register, Salina’s diocesan newspaper. “I feel removed from all distractions and able to focus on the necessities of life. It is an opportunity to live out my vocation to the highest level possible.

“This time fulfills me immensely as a missionary and a priest — opportunity for personal prayer and ministry.”

His chaplain detachment team serves most of the Middle East. Father Awotwi said he is on the road daily to minister to troops at locations across the region.

“Hardly do we get to spend two nights in the same (place),” he said. “We are constantly on the move.”

Father Awotwi said there are two Catholic unit ministry teams for Iraq. With about 5,000 troops on the ground, there is always someone to serve.

“I am moved by the realities of theater (military operations), soldiers hungry for the sacraments,” he said. “The stress of combat environment brings people to basics of their life existence.”

This makes them more open to religious ministry.

“Sometimes soldiers go months with the sacraments and they welcome our presence with gratitude,” he said. “I do experience such yearning for faith and a reaching out, on the part of soldiers, to derive nourishment from the reservoir of resources that faith traditions offer.

“These are the few realities of theater environment that not only moves me, but motivates and energizes me.”

One surprising aspect of his service is the openness of commanders to religious ministry. Even commanders who do not practice a faith, Father Awotwi said, make religious support a priority for their troops.

“Religious support for soldiers is prioritized such that when our flight schedule did not allow my team to go to a location, commanders would go to the highest level possible to make sure they have us at their camps,” he said. “Where else would you see this in a secular institution?”

While he is an ordained Catholic priest, Father Awotwi said he ministers to multiple faiths.

“It’s not only for Catholics — I’m there for all the soldiers,” he said.

Father Awotwi joined the Missionaries of Africa religious order in East Africa. After the sudden death of his mother, however, he departed the order and completed his education at a Catholic university.

“My initial formation as priest was missionary-oriented with inculcation of missionary zeal,” Father Awotwi said.

He began his studies for the Diocese of Salina in 2008 and was ordained a priest June 4, 2011. Per requirements from the U.S. military archdiocese, Father Awotwi worked as a priest for at least four years before applying to be a military chaplain with the archdiocese. During that time, he worked in several rural parishes throughout the diocese.

Life as a military chaplain has similarities to life as a diocesan priest.

“The difference is the context and the fact of this is done in theatre and in combat zone,” Father Awotwi said.

A priest must get the permission of his bishop to serve in the military. In 2014, Salina Bishop Edward J. Weisenburger agreed to loan Father Awotwi to the military archdiocese. On May 15, 2015, Father Awotwi took his oath of office as a military chaplain, then reported to South Carolina in January for his training. Within a one month, he said, he was approached about serving soldiers overseas.

Father Awotwi said the need for priests willing and able to serve troops is staggering.

“It is projected that by June 2017 active duty priests in the Army will drop from 100 to 70,” he said. “That is far below the minimum of about 400 priest chaplains needed to provide pastoral and spiritual care for Army service personnel and their families. It is a dire situation.”

He approaches the situation with enthusiasm.

“In short, the dire need, responding to the religious needs — celebrating the sacraments with our Catholic soldiers and my personal enrichment affirm my presence as the chaplain in the United States Army,” Father Awotwi said. “I am humbled by the opportunity to serve those who serve.”

NEXT: Pope prioritizes need for an economy that includes poor, archbishop says