Chef stays cool as a cucumber turning out 4,500 meals daily 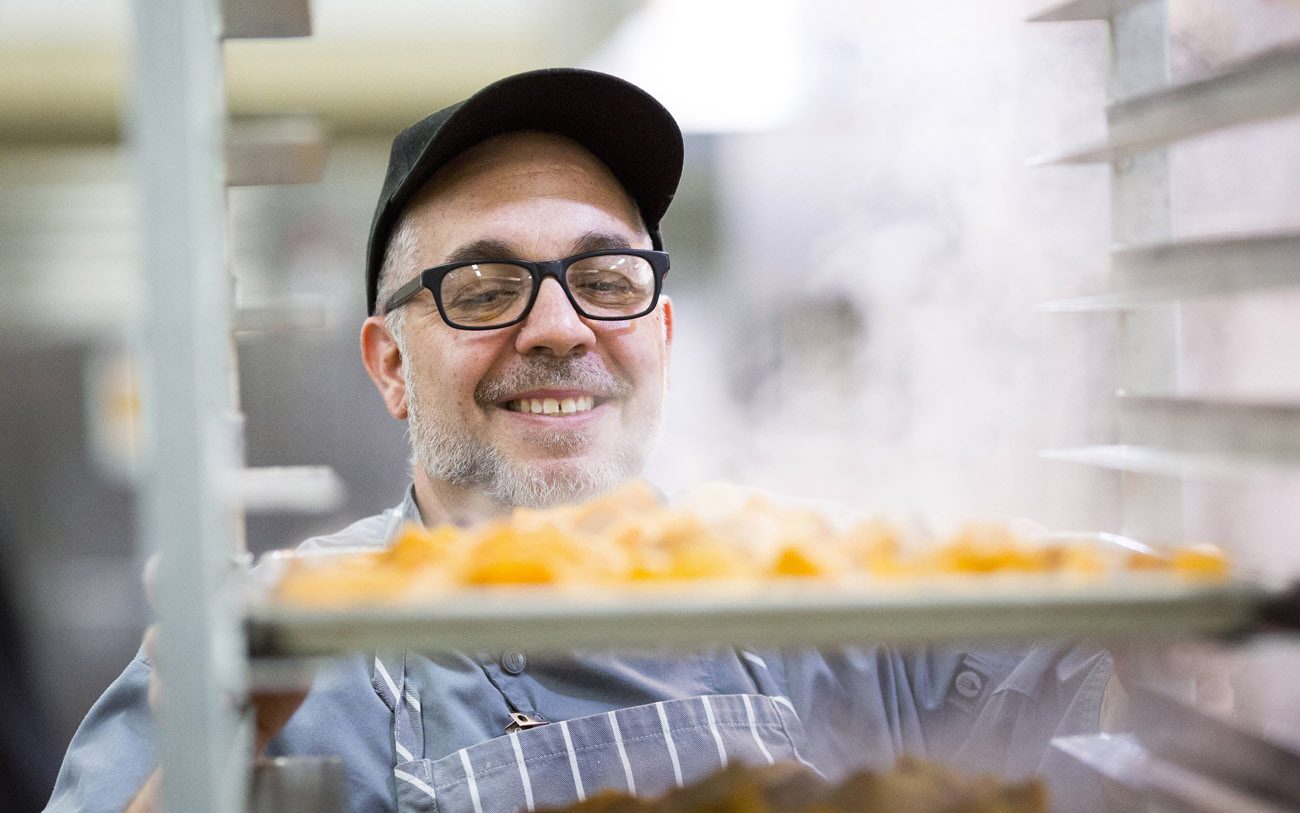 Executive chef Chris Hoffman looks over trays of steaming sweet potatoes in the kitchen of the Society of St. Vincent de Paul in Phoenix Nov. 17. Society staff and volunteers prepare 4,500 meals a day and will do more for Thanksgiving and Christmas. (CNS photo/Nancy Wiechec)

PHOENIX (CNS) — Chris Hoffman is cooking for 4,500 guests this holiday season, yet he’s cool as a cucumber.

“It should go well,” he said. “We did it last year and it went very smoothly.”

The confident executive chef runs the sprawling kitchen of the Society of St. Vincent de Paul in Phoenix. He credits his staff and cadre of volunteers with making his job practically stress-free.

“I have a reliable staff, a reliable kitchen team,” Hoffman told Catholic News Service as he made kitchen rounds one week before Thanksgiving. “We do a lot of food for a lot of people.”

Beef stew simmered in a huge vat. Pork loin sizzled in a roaster. Large trays of freshly baked cookies were being pulled from hot ovens. Volunteers, who execute much of the food prep, were busy slicing and dicing a number of fresh fruits and vegetables.

The food would be dished out to the homeless population and to families in need at several dining rooms in the Phoenix area. 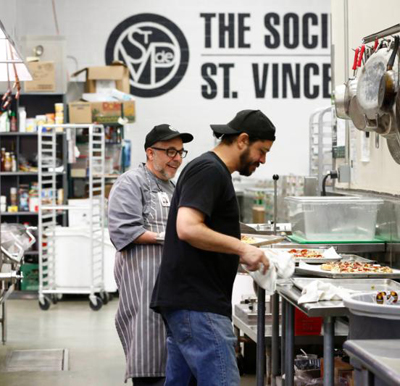 Chris Hoffman, executive chef for the Society of St. Vincent de Paul in Phoenix, keeps calm as he and his staff prepare meals Nov. 17. His staff and volunteers prepare 4,500 meals a day and will do more for Thanksgiving and Christmas. (CNS photo/Nancy Wiechec)

Preparing thousands of meals is nothing new for Chef Hoffman’s kitchen. The staff and volunteers accomplish it every day. The holiday menu though is special.

Hoffman said St. Vincent’s turkey-day feast will include more than 200 oven-roasted birds, 50 gallons of gravy, 2,000 pounds of potatoes, 2,500 pounds of stuffing, lots of cranberries and 4,800 slices of pumpkin pie.

His kitchen will also turn out holiday specialties such as sweet-potato pies, tamales and decorated cookies.

“I’m very fortunate to be part of the St. Vincent de Paul team,” the chef said. “We have wonderful volunteers, a wonderful staff, a staff that cares very much about our clients.”

He said he is grateful to the society, and not only because he’s head chef.

“St. Vincent de Paul helped me a number of years ago with my family.”

Raised in New York, Hoffman was cooking at an early age because his mother worked many hours. He said he learned more about cuisine from an uncle, a Catholic priest who enjoyed good food.

After receiving his degree in the culinary arts and cooking in several restaurants, Hoffman was hired by the Ritz Carlton in Montego Bay, Jamaica. Later, he returned to the States, resettling in Arizona with his wife and their infant daughter.

“I’m a chef because I love to feed people and see people smile and make them happy. We’re not here to put out perfect food. We’re here to put out good food, nutritious food for our guests. And the main thing is, we’re kind to people. We help people.” — Chef Chris Hoffman

In a new state with his young family, “it was just hard getting back into the workforce,” he recalled.

The family had some setbacks, so he called on St. Vincent de Paul for assistance. The society provided him with food boxes, help with rent and utilities, and a car to use while he looked for work.

“I’m forever grateful for that help,” he said. “It’s something that I will always remember and (it’s) why I’m here now.”

He worked as a chef at the Phoenician, a luxury resort in Scottsdale, before answering an ad for the executive chef position at St. Vincent’s in the summer of 2015.

As the chef moved around the kitchen during the interview with CNS, he stopped next to volunteer Joe DeLibero, who was busy breaking down a 50-pound bag of onions.

“Want some help?” Hoffman asked, and he sharpened his knife and started in on the onions.

DeLibero, who volunteers in the kitchen two days a week, seemed immune to the eye-watering effluvium of cut onions. He worked methodically next to the chef.

When Hoffman was called away from the cutting board, DeLibero offered his thoughts.

“He’s a great chef and a wonderful person,” he said of Hoffman. “He shows a lot of respect for the workers and volunteers. And the food is really good.”

Hoffman joked that he’s a chef because he loves to eat, but what motivates him is the ability to provide people with a base necessity.

“I’m a chef because I love to feed people and see people smile and make them happy,” he said. “It’s a real good feeling to know that you’re providing for people.

NEXT: Christian persecution called ‘purposeful’ destruction of a culture, faith