Vatican official tells bishops to be ‘witnesses to the Risen One’ 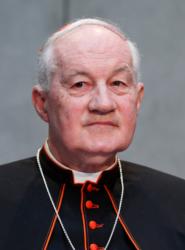 Cardinal Marc Ouellet, prefect of the Congregation for Bishops, is seen at the Vatican June 14. (CNS photo/Paul Haring)

BALTIMORE (CNS) — Canadian Cardinal Marc Ouellet, prefect of the Vatican Congregation for Bishops, told the U.S. bishops that their ministry is to be “witnesses to the Risen One.”

Cardinal Ouellet echoed the words of Pope Francis in a 2014 address when the pope said, “The essential biblical criterion for a successor to the apostles is that he be a witness to the Risen One. In this way, he is first and foremost a martyr for the Risen One.”

The cardinal’s remarks were made during the U.S. bishops’ fall general assembly in Baltimore. Given Nov. 16, on what is ordinarily a full day of meetings in executive session, Cardinal Ouellet’s short address was live-streamed from the meeting room.

“This assembly and this country is in a time of transition, which is rarely something easy,” he noted. “We are supposed to be witnesses — yes, even martyrs sometimes — of our crucified and risen Lord Jesus so our life and ministry may make the Resurrection more credible,” Cardinal Ouellet said.

“This being a martyr,” he added, again echoing Pope Francis, “is not done alone but in communion. … We bishops need to witness in unity and offer together this witness to the world.”

Cardinal Ouellet said, “To expend ourselves as witnesses to the Risen One is in our DNA. It makes us who we are as bishops.”

He added, “We remember this church in the United States has a long history of witnessing to Christ’s resurrection in this country, proclaiming the Gospel and making sure the poor and vulnerable are not forgotten.”

Cardinal Ouellet told the bishops, “Know the meaning of the cross you carry, and carry it with hope. It is my hope that your witness will help this country be what it should be: a force for peace, justice and mercy in the world.”

The cardinal, who was ordained a priest for the Montreal Archdiocese and joined the Sulpician order in 1972, was in the United States to celebrate the 225th anniversary of the Society of St. Sulpice’s presence in the United States. The order is known for its work in priestly formation and seminary education.

While in Baltimore, Cardinal Ouellet also received an honorary degree from St. Mary’s Seminary & University in Baltimore, run by the Sulpicians. It was founded as America’s first Catholic seminary. Also invited to the Nov. 15 anniversary celebration were seminarians from Theologicial College in Washington, which also is run by the Sulpicians, and Sulpician-founded Mount St. Mary’s in Emmitsburg, west of Baltimore. About 30 U.S. bishops also attended the celebration.

In his remarks Nov. 16, Cardinal Ouellet gave his congratulations to the bishops’ new president, Cardinal Daniel N. DiNardo of Galveston-Houston, and new vice president, Archbishop Jose H. Gomez of Los Angeles, both of whom were elected the day before his address. “I am glad I am greeting you today rather than yesterday, so that no one can say that the prefect of the Congregation for Bishops influenced the election,” Cardinal Ouellet said.

The laughter he got from that remark paled next to the applause he received when he noted that the U.S. bishops’ election was “a shorter and cleaner process than the election for the president of the United States.”

He said it reminded him of the joke of three people arguing over which profession was mentioned first in the Bible. The physician claimed it was his profession, as a rib had been taken from Adam. The engineer contended that it was his profession: “Just think of the engineering job it took to create the world out of chaos.” To which the politician replied, “Guess who created the chaos?”

NEXT: Annual Peace Dinner explores responses in a world where violence abounds