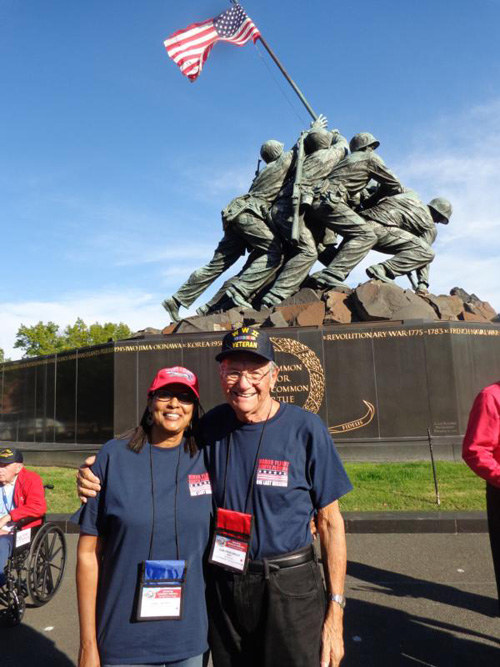 World War II veteran Carl Muscarello of All Saints Parish in Sunrise, Fla., and his guardian, Sandy Thomas, pose Oct. 29 in front of the Iwo Jima Memorial in Arlington, Va., across the Potomac River from Washington. (CNS photo/courtesy The Florida Catholic)

He also remembers well serving in not only that war but two others — Vietnam and Korea, where he was captured after his plane crashed north of Kumsong, North Korea.

“The most interesting thing was that was I was with all the senior officers and they finally forced a lot of them to make confessions,” said Blazevic, 91, a member of Mary, Star of the Sea Parish in Key West, adding, “It took two years of negotiations and we were released.”

A career soldier, he then served in Vietnam in the reconnaissance squadron and more maintenance positions, “working seven days a week while the college kids were revolting in the USA because they didn’t want to be drafted,” he told the Florida Catholic, Miami’s archdiocesan newspaper. “It didn’t bother me that we didn’t have a parade, and I had a lot of work and was keeping busy.”

Blazevic finally got something of a welcome parade in late October. He was among nearly 80 veterans of war to travel recently with Honors Flight South Florida, a nonprofit organization whose mission is to transport World War II veterans to Washington so they can visit war memorials dedicated to American men and women who made the ultimate sacrifice.

Blazevic’s son-in-law, John McMahon of Key West, accompanied him on the trip after reading about the program in the local newspapers. The program is designed to make World War II a priority and continue with veterans from wars thereafter, and the recent trip included a number of South Florida Catholics from all three counties of the Miami Archdiocese, according to local organizer Stan Bostic.

Most of the veterans were accompanied by a family member or volunteer guardian and were met by a long line of cheering well-wishers at the Miami International Airport upon their return from the one-day visit. 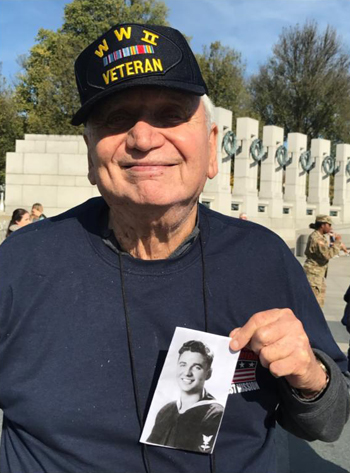 World War II veteran Burton Belenke is seen in Washington Oct. 29 holding a picture of himself when he enlisted. Behind him is the National World War II Memorial. (CNS photo/courtesy The Florida Catholic)

“They lined people up in a snake through the airport so that these WWII veterans coming through this procession line can finally be welcomed home,” said Bostic, who is an original founding member of the local Honors Flight program and a member of Our Lady of Lourdes Parish in Kendall. Bostic also serves as national director of communications for Rick Case Automotive Group.

According to Honors Flight, the World War II generation, often referred to as “the Greatest Generation,” is dwindling quickly as a group, with one such veteran estimated to die every 90 seconds.

In Broward County, Sam DiTullo, a member of St. Stephen Parish in Pembroke Pines, also joined the Honors Flight delegation, accompanied by his son-in-law, Tom Pattison, who worked for the military as a civilian for 30 years. A native of Beacon, New York, DiTullo was 18 years old in 1994 when he served during World War II, entering the theater of war at the beaches of Normandy shortly after the famed invasion there.

“He had never been to Washington and never seen any of these memorials so it was really exciting,” said Pattison of his father-in-law. “It is not that we ignored our veterans back in those years it is simply that not everybody got a ticker-tape parade; people came back and went back to their jobs and to their girlfriends, so this is great,” he added. “I love the whole concept and was really excited to be a part of this.”

Carl Muscarello, a member of All Saints Parish in Plantation, recalled being drafted at the height of World War II and being assigned to ship repair units based in the Pacific and in Staten Island, New York.

“If President Truman didn’t drop the bomb i might not be talking to you today,” Muscarello said, recalling his years of service. “WW II was a sad time for me; six of my brother’s friends were killed. I was 15 years old in Brooklyn when the war broke out and I remember running home to tell my mother that the Japanese bombed Pearl Harbor. A lot of them did not come home, but i did my best. The only time i heard a gun go off when I was on a firing range.”

Muscarello, who was part of the Honors Flight trip, said he had been to see the war memorials previously but enjoyed meeting other vets. “One of the reasons was that I was invited to go was that many of the WWII vets are dying and they are having trouble filling up the flights since not many of us left.”

PREVIOUS: Faith-based panel’s chair: A third of its recommendations implemented

NEXT: Panel: The ‘forgotten’ propelled Trump to victory, but others are in fear