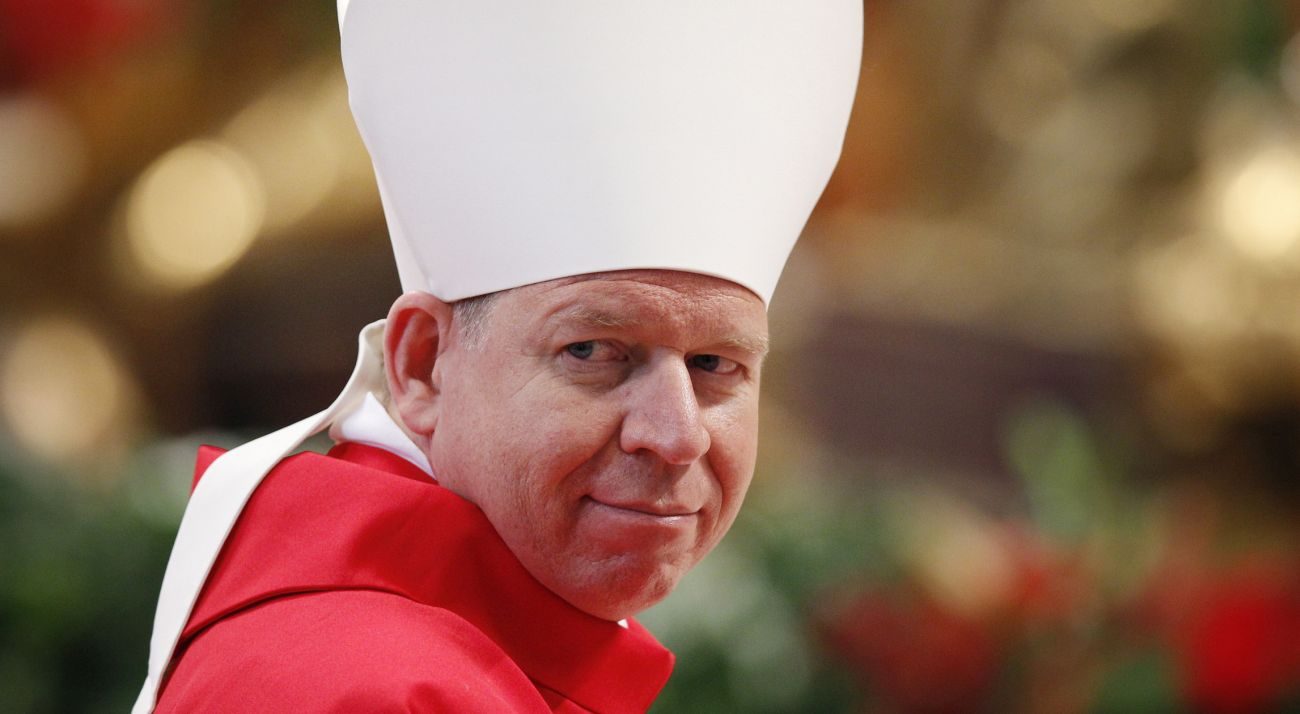 Lithuanian Archbishop Gintaras Grusas is seen at St. Peter's Basilica at the Vatican in this 2013 file photo. (CNS photo/Paul Haring)

The U.S.-born archbishop, president of the Lithuanian bishops’ conference, told Catholic News Service, “The old Soviet empire mentality is still alive, and there are many in Russia who consider the three Baltic states part of that empire.

“But Lithuanians have fought hard to re-establish their independence and are committed to maintaining it. They’ve shown they’re willing to pay a price for freedom — and they’re showing it again today in the turnout of volunteers for military service,” said the Vilnius archbishop.

Although NATO has conducted past exercises in Lithuania, Latvia, Estonia and Poland, in early 2017 it plans to send about 4,000 troops as a rotational deployment in those countries, said a NATO official in Brussels. He said the decision to place troops there indefinitely was made in light of Russia’s 2014 occupation of Crimea.

In a Nov. 29 interview with Catholic News Service, Archbishop Grusas said the projected U.S.-led deployments had provided “some reassurance,” but cautioned that concern remained high because of repeated airspace violations and the stationing of heavy weaponry in Russia’s military enclave of Kaliningrad, on Lithuania’s western border.

“There are always tensions because we’re close to the Russian border and hard to defend, so having our NATO partners’ boots on the ground here shows we’re not left on our own,” Archbishop Grusas said.

“As a church, we’re following Pope Francis in encouraging prayers for peace. We’re also maintaining a community spirit and helping people seek truth when a lot of negative propaganda is being spread by Russian-language media and the internet.”

Lithuania, Latvia and Estonia became independent from the Soviet Union in 1991. They joined the European Union and NATO in 2004, gaining protection under the alliance’s Article 5 collective defense guarantee.

However, all three have increased defense spending sharply and stepped up anti-tank defenses since Russia’s 2014 annexation of Crimea and military involvement in Ukraine. The buildup of radar, air defense systems and nuclear batteries in Kaliningrad is believed likely to impede NATO reinforcements in the Baltics during a crisis. Lithuania’s government reintroduced military conscription in 2015 and has circulated civil defense pamphlets advising citizens what to do in the event of a Russian invasion.

In his interview, Archbishop Grusas said NATO’s European member-states had long been urged to meet their agreed share of defense spending, adding that he believed Trump’s threats to scale down U.S. military commitments unless this happened were “nothing new.”

“This was most probably campaign rhetoric — even a negotiating stance to push the Europeans to pay their share — so I took his pre-election comments with a grain of salt,” said the 55-year-old archbishop, who was born in Washington, D.C., and worked as a marketing consultant with IBM after gaining a mathematics degree at the University of California at Los Angeles.

“Steps have been taken since the U.S. election to reassure NATO members the U.S. position won’t be changed. But we’re in an uncomfortable position for Moscow geographically and fearful of no longer being seen as independent nations,” he said.

“NATO has always been a defensive entity for maintaining peace, and that’s why the church provides chaplains for the military and seeks to preserve its moral profile,” said Archbishop Grusas.

“Whether it’s America or Russia, everybody wants to be great. But a country expresses its greatness when it can respect and live in peace with its neighbors rather than trying to conquer them through acts of war.”

He added that Western bishops’ conferences, including those of the United States, Germany and Italy, had given the Lithuanian church generous support in rebuilding itself since Soviet rule.

“People who’ve gone through 50 years of Soviet occupation, efforts to rebuild the economy and all subsequent hardships will know challenges and insecurities are part of life,” he told CNS.

“But NATO and the EU have prevented war on European soil, and there’s hope this can be preserved. It’s what we’re praying for, with the same faith in God that’s helped us so much in our history.”

In a Nov. 23 resolution, the European Parliament included Russian churches on a list of bodies spreading Kremlin-orchestrated “anti-EU propaganda” and urged Western governments to be more vigilant in “countering disinformation.”

Latvia has barred Russian Orthodox Patriarch Kirill of Moscow and at least one prominent Orthodox priest from entering the country.

NEXT: Pope: Reflections on mercy may be over, but compassion must live on