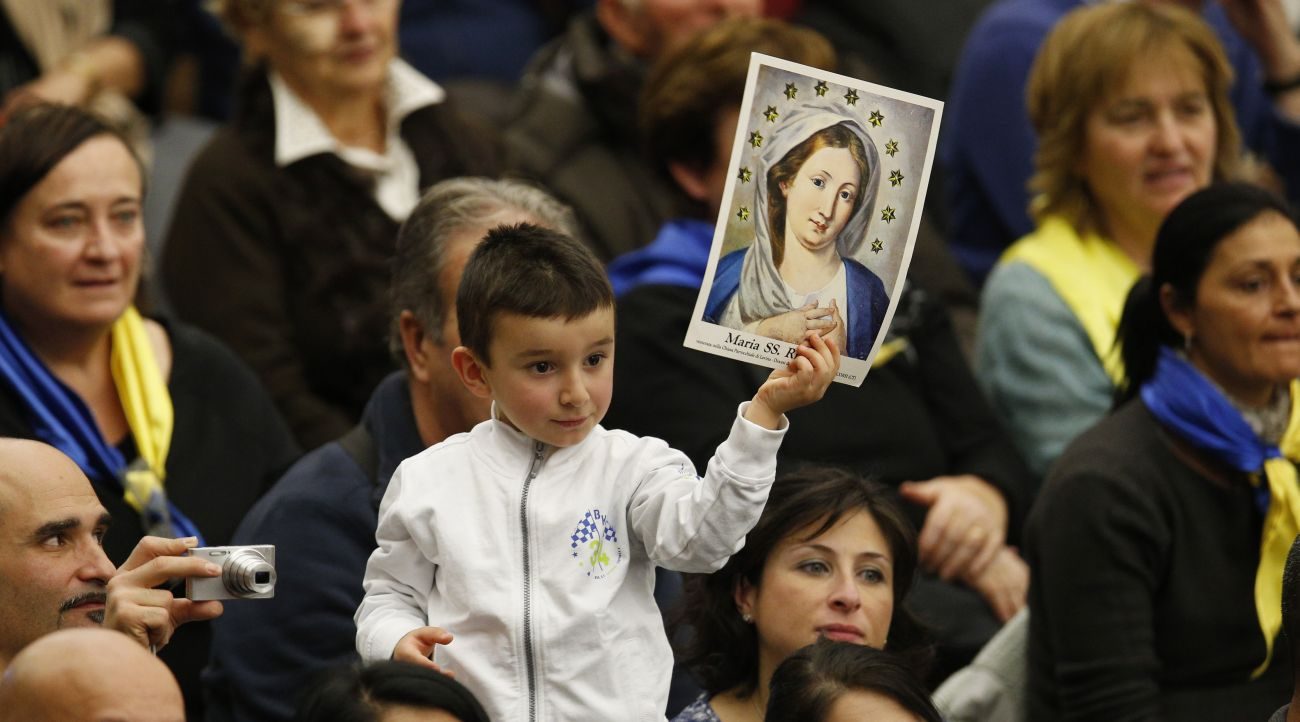 A boy holds an image of Mary as Pope Francis leads his general audience in Paul VI hall at the Vatican Nov. 30. (CNS photo/Paul Haring)

VATICAN CITY (CNS) — God reveals his mysteries, not to the wise and learned, but to those who are childlike, that is, to people who are humble and fear the Lord, Pope Francis said in a morning homily.

During morning Mass in the Domus Sanctae Marthae, where he lives, the pope reflected on the day’s readings. When the prophet Isaiah talks about a small shoot sprouting from the stump of Jesse, the pope said, he is illustrating God’s way of revealing himself through small, simple things. The Lord will come not as the leader of a great army to liberate his people, the pope said, but as a tiny bud.

Jesus, too, in the Gospel reading from St. Luke, says God keeps things hidden “from the wise and learned,” but reveals them to “the childlike.”

With the start of Advent, the pope said, people can reflect on how Christ’s birth was about small things: a tiny stable, a small manger, a child born to a simple mother and father — people with “big hearts, but childlike in their attitude.”

That attitude helps people understand what humility and fear of the Lord are, he said. This is how the faithful live, knowing the Lord is watching over them and giving them the strength to go on in their daily lives.

The pope warned against taking on a “theatrical” humility, marked by boasting, “I am humble, but proud of it!”

True humility, he said, means walking simply with the Lord, serving others and never speaking ill of them.

Advent is also a time to reflect on the many ways people can encounter Christ, the pope said in his homily Nov. 28 — the day after the beginning of Advent and the start of the new liturgical year.

Advent, in fact, is “a time to walk and go meet the Lord, that is, a time to not stand still,” he said.

People can encounter the Lord in three ways, he said: being vigilant in prayer, joyful in praise and diligent in charity.

Charity is more than just making a donation, the pope said. It is also “tolerating people who bother me, putting up with the kids at home when they’re making too much noise or with your husband or wife when there are problems or your mother-in-law, I don’t know, just tolerate it, put up with it.”

The important thing is, he said, is to never stand still, keep moving toward the Lord “and there will be a surprise, because he is the Lord of surprises.”

The great surprise is that the whole time people have been wandering, searching, moving, God was already there, determinedly seeking them out first, he said.

“We take one step and he takes 10. Always. The abundance of his grace, his love, his tenderness that never tires of looking for us.”

All God asks, he said, is that people sincerely desire to encounter him and take at least one small step in good faith; God then does the rest.

In fact, that personal encounter is essential to the Christian faith, not knowing everything about dogma, he said.

“The doctors of the law knew everything, everything about the dogma at the time, all about the morality of that time, everything. (But) they didn’t have faith because their hearts were far from God,” he said. Having the strength to take a step toward God, “this is the grace we ask for today.”