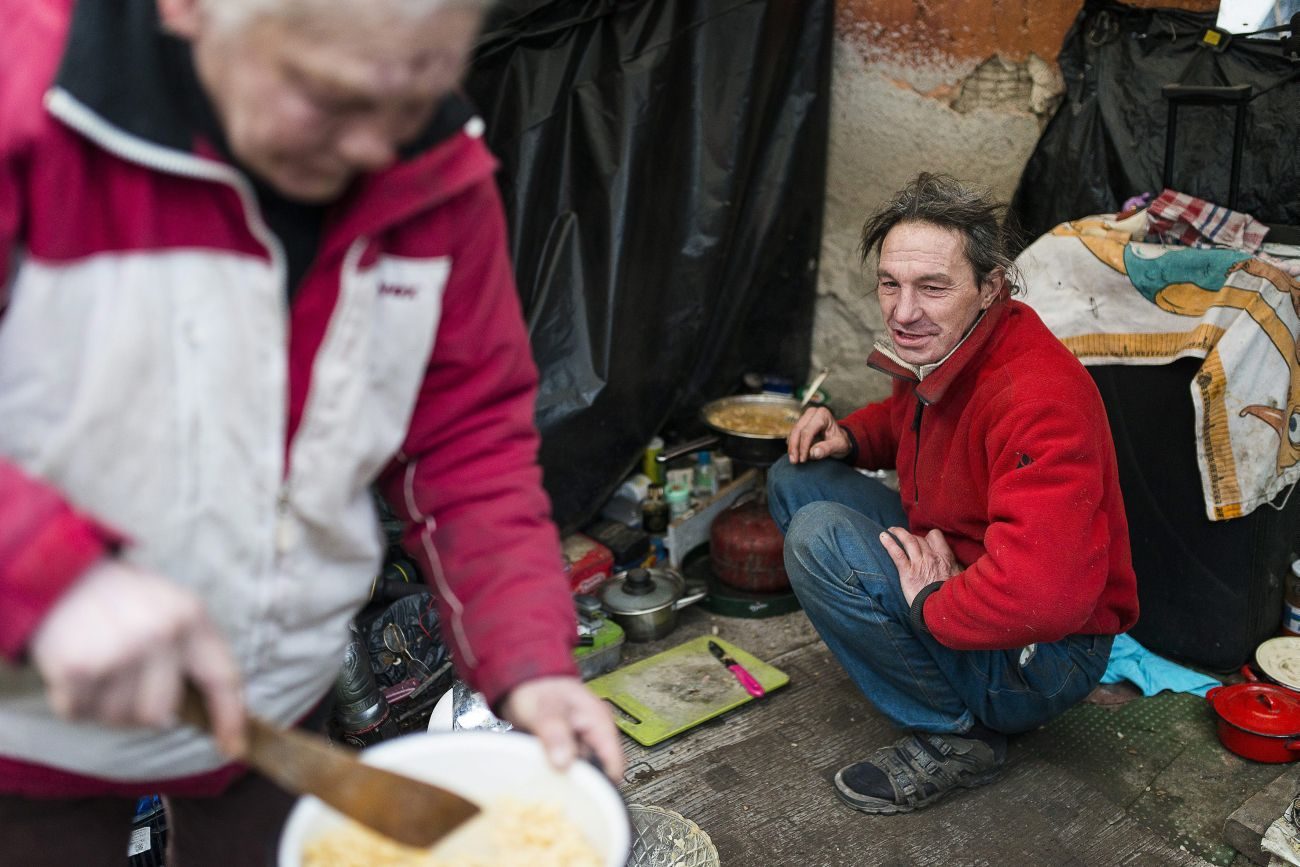 A homeless couple cooks a meal outside their makeshift shelter in late January in Budapest, Hungary. Europe's top Catholic charitable agency has published a "road map for social justice and equality," urging all church members to defend the poor and marginalized. (CNS photo/Attlia Balazs, EPA)

“The financial and economic crisis that started in 2008 proved a ‘stress test’ for European social models,” said the Brussels-based Caritas Europa.

“Solidarity mechanisms have fallen under more pressure because of the austerity measures taken by governments,” it said. “Even before the crisis, about 120 million people were living in or at risk of poverty in Europe — a clear indication that current social protection systems are not keeping their promise.”

The 44-page report said Caritas groups had amassed data on poverty and exclusion to set out “building blocks” for a more-just Europe, which provided welfare for all. It added that inequalities could be reduced by improvements to labor markets and social protection systems, as well as by pro-family measures and the redefinition of “social rights as human rights.”

Among more than 60 policy recommendations for a Caritas social model, it called for universal and enforceable access to social services and benefit entitlements, monthly child allowances and affordable child care, as well as an adequate minimum wage, social housing and equal pay for men and women.

“We are convinced of the necessity to provide for and empower those without the means to meet their basic needs, and to alter the structures in society that keep them excluded from the community,” the Caritas report said. “Consideration of poverty in Catholic social teaching begins from the foundation that each person is both sacred and social, created in God’s image, and destined to share in the goods of the earth as part of a community of justice and mercy.”

Caritas Europa is one of seven regions of the Vatican-based Caritas Internationalis and has member-charities in 46 European countries.

In a foreword to the report, Jorge Nuno Mayer, Caritas secretary-general, said Caritas Europa was “called to denounce unjust structures” and would “assist and empower” poor citizens to demand their rights “until states take up their full responsibility.”

“While things are going well for some, too many others are ignored and left behind,” Rodriguez said.

He told Catholic News Service that all European Union members could implement many of the report recommendations, using “existing tools” for ensuring social justice.

“Our baseline is the preferential option for the poor, to ensure everyone can live in dignity and be treated as human. Caritas reflects Catholic social teaching in everything it does. It’s part of the church and speaks as the church.”

In its 2015 Crisis Monitoring Report, Caritas said poverty and exclusion affected up to a third of the population in Bulgaria, Greece, Hungary, Latvia and Romania, but also 16.1 percent of Germans and 14.4 percent of Austrians. It said half of all EU states had “serious gaps” in their social welfare systems.

It added that social unrest was increasing faster in Europe than elsewhere in the world, fueling racism, xenophobia and hatred, and said social cohesion was fading as trust in political institutions “increasingly weakened.”

NEXT: Beyond expectations: Pope sees God of surprises at work in 2016