Texts of Argentina homilies come with pope’s notes on preaching 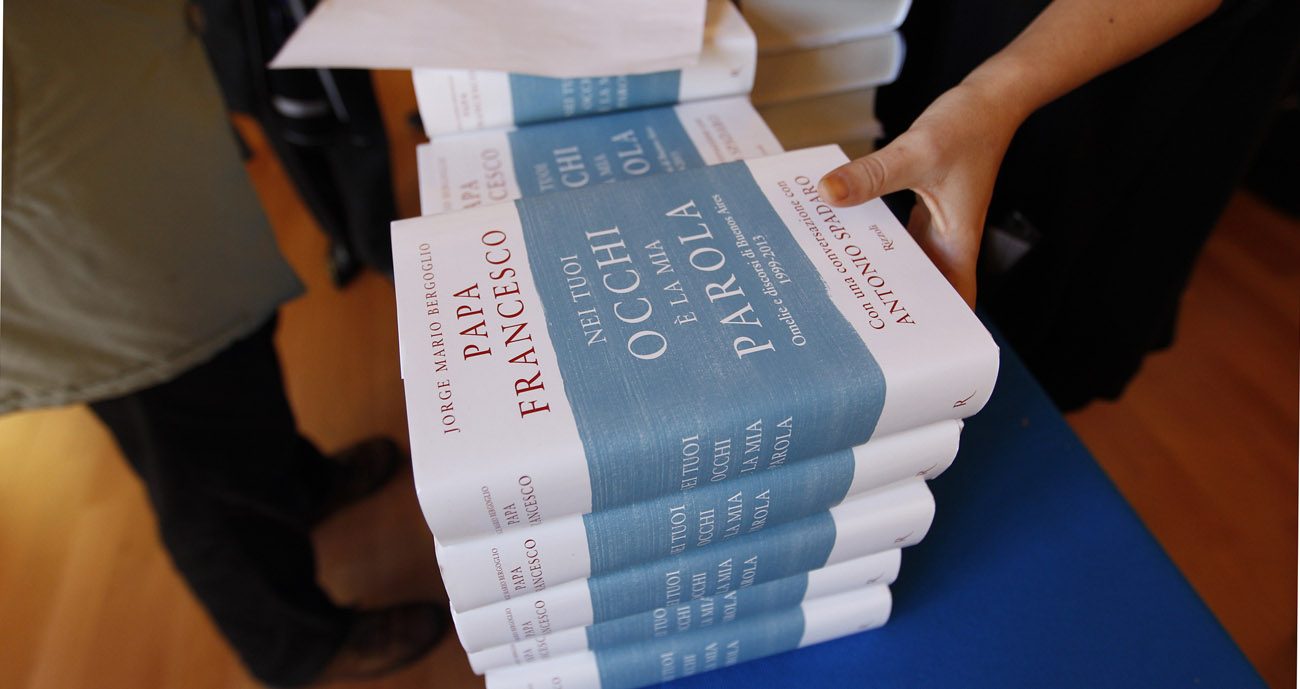 Copies of a new collection of homilies and speeches Pope Francis gave as archbishop of Buenos Aires, Argentina, are distributed to journalists ahead of a conference at Jesuit headquarters in Rome Nov. 10. (CNS/Robert Duncan)

ROME (CNS) — A pastor out of touch with his parishioners’ lives has little chance of preaching a homily that can make the Gospel come alive for them, Pope Francis said.

“Sometimes our words respond to questions nobody is asking,” he said in a new interview with Jesuit Father Antonio Spadaro, editor of the Jesuit journal, La Civilta Cattolica. “If you don’t listen to people, how can you preach?”

The interview introduces a new collection, in Italian, of homilies and speeches he gave as archbishop of Buenos Aires, Argentina, from 1999 until his election as pope in 2013.

Presenting the volume, Jesuit Father Federico Lombardi, former papal spokesman, said the more than 1,000 pages of text include all the homilies for which a written record could be found or for which there was a recording that could be transcribed.

Cardinal Pietro Parolin, Vatican secretary of state, told reporters Nov. 10 that the book is invaluable to understanding the roots of Pope Francis’ ministry and the development of his pastoral style.

Reading the texts, the cardinal said, “one not only can imagine the bishop who walks the streets or rides the subway of his city and diocese,” as the former Archbishop Jorge Mario Bergoglio did, “but one also will gain perspective for seeing him come to the balcony of St. Peter’s Basilica.”

This record of his ministry in Argentina also shows how his words and gestures as pope come from a ministry that always focused on discernment and mercy, Cardinal Parolin said.

Cardinal-designate Blase J. Cupich of Chicago, who also spoke at the book presentation, said Pope Francis’ pastoral experience as a bishop is now placed at the service of the universal church.

In the book, he said, “I did not find pastoral theories or technical formulas; I found a life lived, experience and wisdom.”

Calling Pope Francis “the first — and perhaps only — Jesuit pope in history,” Father Arturo Sosa, the new superior general of the Jesuits, said the interview with Father Spadaro and the texts in the collection show how much Pope Francis enjoys and ministers through conversation. “His homilies are a form of spiritual conversations,” which is why the pope finds it so important to make a personal contact with people, even if the altar is far from the front row of faithful.

Although now forced to write out his homilies for public events so they can be translated in advance, Pope Francis said he dislikes the practice and, whenever possible, he adds at least a few words or phrases to show he is speaking directly to the people in front of him.

When he preaches to a crowd in St. Peter’s Square, “I don’t see a crowd; I try to look at least at one person, a precise face,” he told Father Spadaro.

Pope Francis said that his small morning Masses in the chapel of his residence, the Domus Sanctae Marthae, allow him to continue to preach in the way he prefers.

“When I speak, I have to speak to someone,” he said. “I have this profound need” for a direct connection with the congregation, so “I have this impulse to depart from the text, to look in someone’s eyes.”

While admitting that it does not always work, Pope Francis has a regular practice for preparing his homilies for the morning Masses in his residence chapel.

“I start the day before, at noon the day before,” he said. “I read the texts for the next day and, usually, I choose one of the two readings” on which to focus. “I read the passage I have chosen out loud. I need to hear the sound, to listen to the words.

“During the rest of the day, the words and thoughts come and go while I do what I have to do: meditate, reflect, savor,” he said. “There are some days, though, when evening comes and still nothing has come to mind. I have no idea what I will say the next day. In that case, I do what St. Ignatius said: I sleep on it. And, then, when I wake up, inspiration comes. The right things come to mind. Sometimes they are strong, sometimes weak. But that’s the way it is.”

Listening to people’s stories, including in the confessional, is essential for preaching the Gospel, he said. “The further you are from the people and their problems, the further you hide behind a theology framed as ‘You must and you must not,’ which doesn’t communicate anything, which is empty, abstract, lost in nothingness.”

Asked about the liturgy, Pope Francis insisted the Mass reformed after the Second Vatican Council is here to stay and “to speak of a ‘reform of the reform’ is an error.”

In authorizing regular use of the older Mass, now referred to as the “extraordinary form,” now-retired Pope Benedict XVI was “magnanimous” toward those attached to the old liturgy, he said. “But it is an exception.”

Pope Francis told Father Spadaro he wonders why some young people, who were not raised with the old Latin Mass, nevertheless prefer it. “And I ask myself: Why so much rigidity? Dig, dig, this rigidity always hides something, insecurity or even something else. Rigidity is defensive. True love is not rigid.”