Welcome to the club: Cardinal-elders talk about pope’s 80th birthday 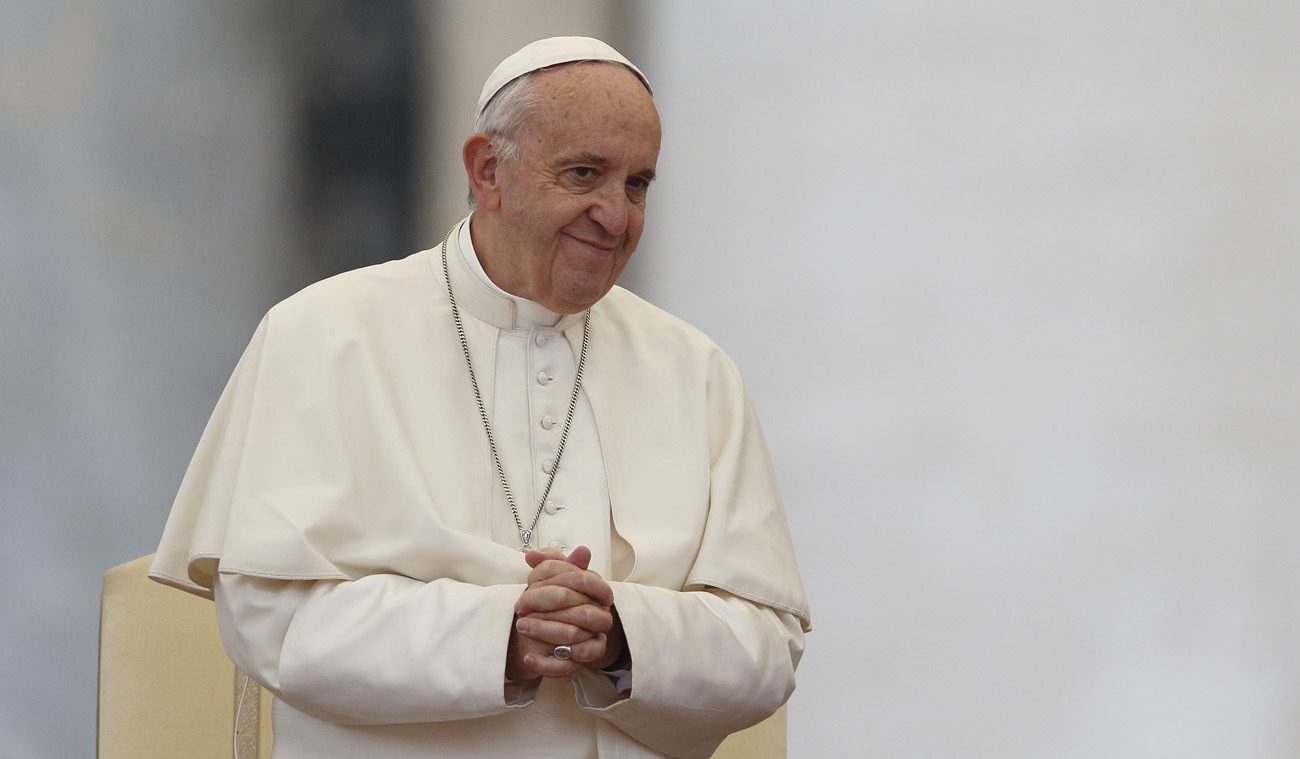 Pope Francis smiles as he leads his general audience in St. Peter's Square at the Vatican Oct. 26. (CNS photo/Paul Haring)

VATICAN CITY (CNS) — Three years ago Pope Francis described retired Pope Benedict XVI as being like a wise grandfather, although there is less than 10 years’ difference in their ages; today, Pope Francis tends to include himself in the category of grandfatherly figures.

“You, or better we — because I, too, am one of you — are called to work for the development of a culture of life, witnessing that every stage of existence is a gift from God and has its own beauty and importance, even if it is marked by fragility,” the pope told 7,000 Italian grandparents during a meeting in October.

Pope Francis was to celebrate his 80th birthday Dec. 17.

For the Catholic hierarchy, especially those working at the Vatican, 80 is a significant age. When cardinals turn 80, they no longer are members of the Vatican congregations and councils they served, even in retirement. Also, cardinals over 80 are no longer eligible to enter a conclave to elect a new pope.

Yet, like Pope Francis, many of the over-80 cardinals have active ministry schedules and continue to travel the world on behalf of the church, their bishops’ conferences and Catholic agencies and organizations.

“It’s nothing special to turn 80 — it happens all the time,” said Portuguese Cardinal Jose Saraiva Martins, former prefect of the Congregation for Saints’ Causes. He turned 80 at the beginning of 2012.

“We continue working,” he said, because “there’s always something to do.”

Pope Francis, the cardinal told Catholic News Service, “is a fantastic, stupendous example for all of us — cardinals, bishops, priests and laity — that we are called to serve the church and continue serving it at every age.”

Three retired cardinals who spoke to CNS about the pope’s impending birthday laughed when asked, “Is 80 the new 60?” But they all admitted to slowing down as the years pass and aching a little more.

“Life goes on; you have to go on with it,” said Cardinal Theodore E. McCarrick, the 86-year-old former archbishop of Washington, who still travels the world on behalf of the church.

The cardinal said he must keep going because he is “trying to use all these experiences I’ve had in the past and put it at the service of the Lord and the service of his people.” All the older cardinals “do that in one way or another. We’re here to serve. I wish I’d served better; I wish I’d worked harder.”

He said because “it touches me directly,” he should not comment on the appropriateness of the Vatican rule that after the age of 80 cardinals are no longer members of Vatican congregations and no longer eligible to enter a conclave. But, he said, “you have to find other ways to be useful.”

“Some of the cardinals do it in very spiritual and wonderful ways and others who are not as spiritual — people like me — we try to find other ways to be helpful,” said the cardinal.

Official retirement brought more freedom, he said, “even though we are always bound by pastoral responsibility because we are still priests.”

As one ages, he said, one’s prayer life “should deepen. You should be more and more conscience of God’s presence in your life, not just if you are a cardinal, but everybody. We should be more able to appreciate how good God is to us and how wonderful it is that he gave us these responsibilities to help us help other people.

“We are here to do the Lord’s work, to help our neighbor, to help those on the periphery, as the Holy Father likes to say,” Cardinal McCarrick said.

As for Pope Francis’ upcoming birthday, the cardinal said, “I certainly hope he will take care of himself. I think many of us worry about him — he never seems to tire, but I think that’s a gift he has from the Lord, not just the gift of energy, but of enthusiasm.”

Cardinal Jozef Tomko, who at the age of 92 still stands tall and straight, has no doubts Pope Francis “will know how to face this birthday.” For his part, the cardinal said he prays what he’s prayed for all seven popes during his lifetime — the traditional: “May the Lord preserve him, and give him life, and make him blessed upon the earth. …”

“It is common experience that after the age of 80 one’s physical and mental capacities are less fresh and tend to decline, with some exceptions,” he said, which explains why cardinals are released from some responsibilities after they celebrate the big 8-0.

Cardinal Tomko said his own prayer life has changed over the years, but he did not connect the change to the idea of being closer to life’s end. Rather, he said, it is because of “the ‘provocations’ and needs” of people in the world and “the examples I have before my eyes. I hope to be able to grasp the signs of the times around me as well as inspiration from above and from within my heart.”

“I thank God, the Lord of history, for the popes I have known and for the gifts with which he has enriched them,” Cardinal Tomko said. “Without exaggerating, I am convinced that we have had a century of great popes.”