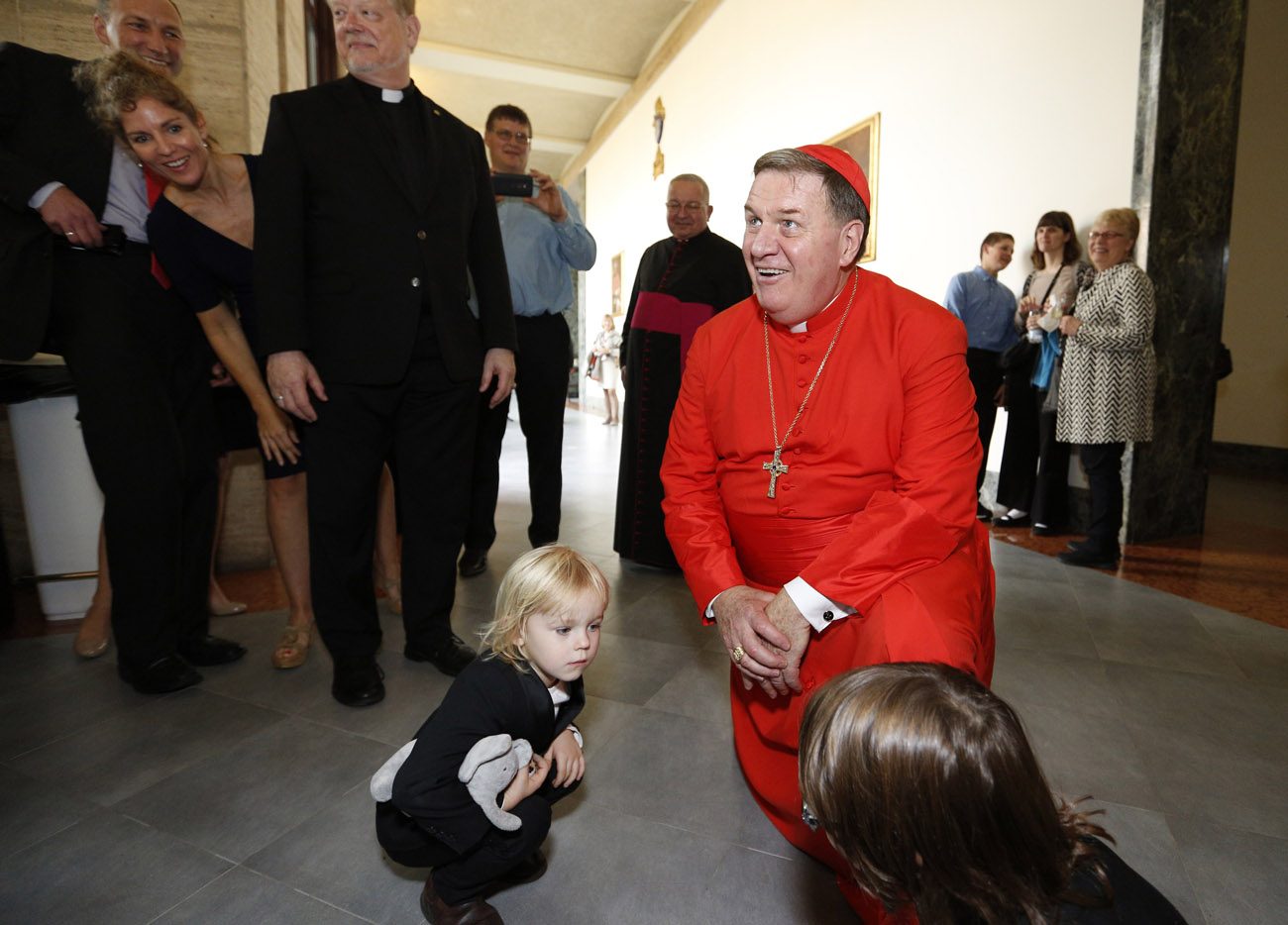 New Cardinal Joseph W. Tobin of Indianapolis gets down to floor level to greet children during a reception at the Pontifical North American College after a consistory at the Vatican Nov. 19. Cardinal Tobin was among 17 new cardinals created by Pope Francis. (CNS photo/Paul Haring)

VATICAN CITY (CNS) — Balancing a cup in one hand and a small sandwich over the plastic plate on her lap while a grandchild played on the floor next to her wheelchair, Marie Terese Tobin beamed with joy for all the gifts God has given her.

“Now I know why I lasted this long,” said the nonagenarian, to see the eldest of her 13 children be made a cardinal. “It’s the frosting on the cake,” she said, smiling.

Her son, Cardinal Joseph W. Tobin, was one of 17 men from 14 countries to be inducted into the College of Cardinals by Pope Francis during a ceremony in St. Peter’s Basilica Nov. 19.

“Have you got all day?” she laughed when asked what makes Cardinal Tobin special. “I can’t tell you how much he loves his family,” keeping in touch with siblings and their children, knowing what each and every one of them is up to.

This is what makes him a real pastor — that “ability to have a really intimate relationship with everyone,” she told Catholic News Service at a reception for the three new U.S. cardinals at the Pontifical North American College.

The cardinal’s humility also means “he doesn’t realize the impact he has on people,” said the “baby” of the family, his sister, Sara Broderick, who lives near her mother in Stoney Pointe, Ontario.

Becoming a cardinal “won’t go to his head. Joe will still be Joe. He will still care about what the kids are doing in sports,” she said.

Family, friends and supporters, including government officials, attended the solemn ceremony in St. Peter’s as well as the receptions that followed. 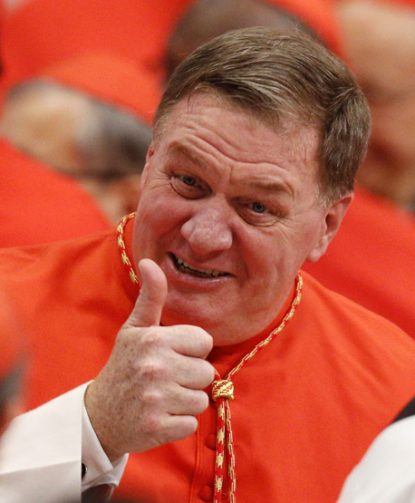 New Cardinal Joseph W. Tobin of Indianapolis gives a thumbs up as he arrives for a consistory in St. Peter’s Basilica at the Vatican Nov. 19. (CNS photo/Paul Haring)

Hundreds of people from around the world, many of them coping with jet lag from long flights, stood patiently in line waiting for their turn to greet, get a picture with or receive a blessing from their new cardinal in the Vatican’s Paul VI audience hall.

With restoration work underway, none of the receptions were held this year in the ornate frescoed halls of the Apostolic Palace. In the audience hall, the mood was happy but very subdued compared to other years when groups would sometime break the din with loud singing or dancing.

Cardinals added some personal touches to the “station” where they received guests. Some chose their nation’s flag, but Cardinal Blase J. Cupich of Chicago had the Chicago Cubs Win banner — a giant blue W — to mark his city’s recent World Series victory.

The public officials said they came because of the fruitful working relationship Cardinal Cupich has built up with them.

Seeing the city’s archbishop elevated to cardinal “gives the city hope to be better,” inspiring people to recognize and take “the path of success,” Johnson said.

He said Cardinal Cupich “jumped in with both feet to help” each time they met to discuss the many challenges law enforcement faces. “He’s been very supportive in our efforts to get into neighborhoods” and reduce violence.

“It’s important to come together as a city to support him because if he succeeds, we succeed,” Johnson said.

Catholic leaders are critical in bringing peace and unity to their communities, particularly when the pope honors them with a red cardinal’s hat, said a number of pilgrims from Papua New Guinea.

The nation’s islands are home to hundreds of ethnic groups, who have been experiencing conflict, said a priest who gave his name only as Father Japhet.

Many of the 45 people who traveled 23 hours from the South Pacific to see the archbishop of Port Moresby become Cardinal John Ribat belong to different ethnic groups, he said.

“Every parish built a small Holy Door, and people came and agreed to promise to reconcile, to heal and come together” to promote a message of mercy, the 53-year-old priest said.

Jean Betrand Goumba, who lives in Rome but is from Central African Republic, said he hopes the new cardinals and all Catholics “take a lesson from Pope Francis, who is doing so much for the whole world. He’s giving a big example” of what love is, “something that is missing in the world.”

The historic gesture the pope made in Bangui, the nation’s capital, by opening the Year of Mercy there was highlighted by many women who made colorful dresses depicting the pope’s face and commemorating his visit.

Many people attending the consistory also were planning to attend the closing of the Holy Door in St. Peter’s Basilica Nov. 20, including a number of U.S. parish choirs invited to sing with the Sistine Chapel choir at both events.

Karen and Gary McLand, who traveled with the choir of Our Lady of Good Counsel parish in Plymouth, Michigan, said the Year of Mercy has brought them closer to the faith as a result of joining a parish study group.

Being with others “who want to deepen their faith inspires you” to do so, too, Gary said.

“I wouldn’t ever have come here to Rome on a pilgrimage,” Karen said, if it hadn’t been for the faith formation group.

Rebecca Padley, who was with the choir of St. John Cantius in Chicago, said the Year of Mercy has helped her see people differently.

“We always ask for things, but then we are tested,” which, she said, pushes her to try to be even more understanding.

As a doctor, “I take care of patients every day, but now I try to do it (be merciful) even more.” 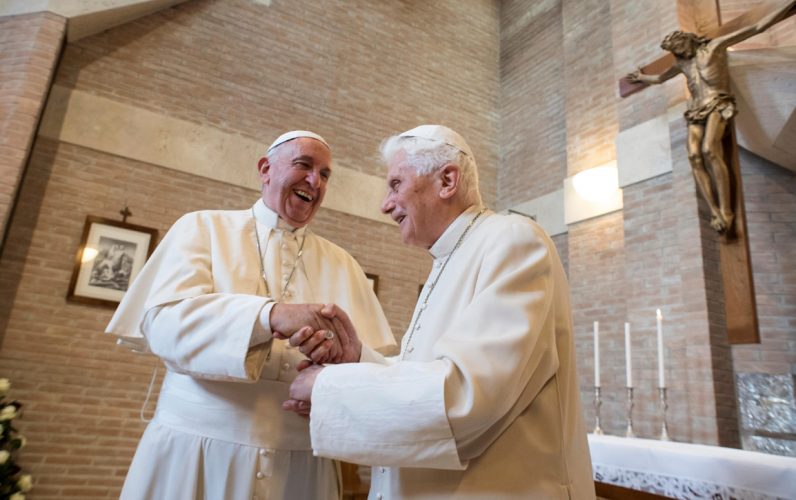 Pope Francis talks with Pope Emeritus Benedict XVI during a visit with new cardinals at the retired pope’s residence after a consistory at the Vatican Nov. 19. (CNS photo/L’Osservatore Romano, handout)

NEXT: Pope calls new cardinals to be agents of unity in divided world