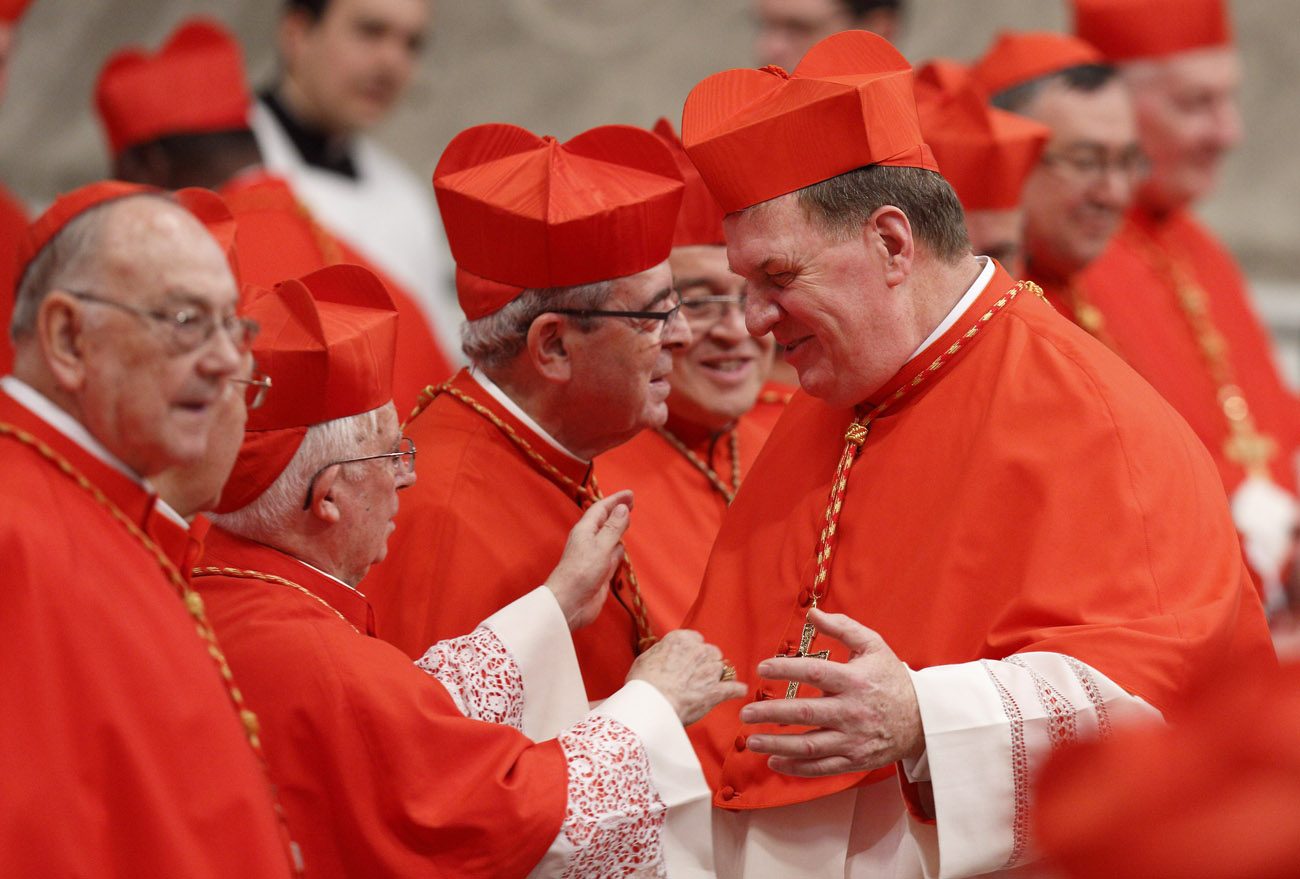 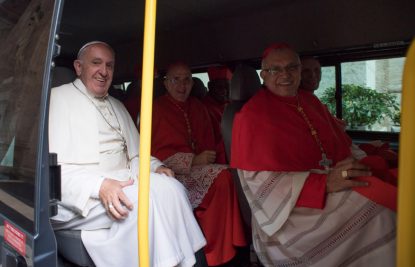 Pope Francis and new cardinals ride a bus to visit with Pope Emeritus Benedict XVI at the retired pope’s residence after a consistory at the Vatican Nov. 19. (CNS photo/L’Osservatore Romano, handout)

VATICAN CITY (CNS) — The Catholic Church’s 17 new cardinals must dedicate their lives to being ministers of forgiveness and reconciliation in a world — and sometimes a church — often marked by hostility and division, Pope Francis said.

Even Catholics are not immune from “the virus of polarization and animosity,” the pope told the new cardinals, and “we need to take care lest such attitudes find a place in our hearts.”

Creating 17 new cardinals from 14 nations Nov. 19, the pope said the College of Cardinals — and the Catholic Church itself — must be a sign for the world that differences of nationality, skin color, language and social class do not make people enemies, but brothers and sisters with different gifts to offer.

Three of the new cardinals created during the prayer service in St. Peter’s Basilica were from the United States: Cardinals Blase J. Cupich of Chicago; Kevin J. Farrell, prefect of the new Vatican office for laity, family and life; and Joseph W. Tobin, whom the pope asked to move from being archbishop of Indianapolis to archbishop of Newark, New Jersey.

Only 16 of the new cardinals were present for the ceremony. The Vatican said 87-year-old Cardinal Sebastian Koto Khoarai, the retired bishop of Mohale’s Hoek, Lesotho, was created a cardinal although he was unable to travel to Rome.

After reciting the Creed and taking an oath of fidelity to Pope Francis and his successors, each cardinal went up to Pope Francis and knelt before him. The pope gave them each a cardinal’s ring, a three-cornered red hat and a scroll attesting to their appointment as cardinals and containing their “titular church” in Rome. The assignment of a church is a sign they now are members of the clergy of the pope’s diocese.

After the consistory, Pope Francis and the new cardinals hopped in vans for a short ride to visit retired Pope Benedict XVI in the Mater Ecclesiae Monastery, his residence in the Vatican gardens. The retired pope greeted each cardinal, thanked them for stopping by and assured them, “My prayers will accompany you always.”

Cardinal Mario Zenari, the pope’s ambassador to Syria, spoke on behalf of the new cardinals, promising Pope Francis that they and the entire church would continue to be envoys of God’s mercy, bending down to help those “left half dead on the side of the road, wounded in body and spirit.”

The Gospel reading at the consistory was St. Luke’s version of Jesus’ discourse to his disciples: “Love your enemies, do good to those who hate you, bless those who curse you, pray for those who mistreat you.”

“They are four things we can easily do for our friends and for those more or less close to us, people we like, people whose tastes and habits are similar to our own,” Pope Francis said. But Jesus, not mincing his words, calls his followers to more.

“With people we consider our opponents or enemies,” the pope said, “our first instinctive reaction … is to dismiss, discredit or curse them. Often we try to ‘demonize’ them, so as to have a ‘sacred’ justification for dismissing them.”

In God, he said, there are no enemies. There are only brothers and sisters to love.

All people are embraced by God’s love, he said. “We are the ones who raise walls, build barriers and label people.”

Just as God loves and forgives the pope and the cardinals for their sinfulness, he said, so they must love and forgive others, undergoing “the conversion of our pitiful hearts that tend to judge, divide, oppose and condemn.”

Looking around the modern world, Pope Francis said, “we live at a time in which polarization and exclusion are burgeoning.”

“We see, for example, how quickly those among us with the status of a stranger, an immigrant or a refugee” are seen as threats, he said. They are presumed to be an enemy because they come from a different country, “because of the color of their skin, their language or their social class. An enemy because they think differently or even have a different faith.”

The “growing animosity between peoples” is found even “among us, within our communities, our priests, our meetings,” the pope said.

“We need to take care lest such attitudes find a place in our hearts, because this would be contrary to the richness and universality of the church, which is tangibly evident in the College of Cardinals,” he said. The cardinals come from different countries, “we think differently and we celebrate our faith in a variety of rites. None of this makes us enemies; instead, it is one of our greatest riches.”

Speaking to Catholic News Service after the consistory, Cardinal Tobin said the pope’s homily was “very timely” and the cardinals, as well as all Catholics, should “examine ourselves and the church to see whether we have unconsciously appropriated this ‘virus'” of polarization and animosity. It may hide under “the name of truth or the name of orthodoxy or something, when it actually serves to divide. I think probably that is resistance to the acts of the Holy Spirit.”

“In this year of mercy,” Cardinal Farrell told CNS, “we all need to be a little more concerned about and merciful and compassionate to each of our brothers and sisters. And I think that’s the great message that the Holy Father wished to convey.

“We all need to learn how to respect each other. We can disagree on many points, but we need to enter into dialogue and conversation with each other. I believe that is what the Holy Father wanted and what the year of mercy is all about,” the cardinal said. People can discuss and debate theological problems, “but if they don’t do it with charity — as St. Paul would say — what good is it?”

Cardinal Cupich said Pope Francis “hit the nail on the head because a virus can be contagious and it can spread like wildfire, and he wanted to make sure that every individual took responsibility for making sure that whoever the person is who we disagree with, we do not make an enemy out of them, that we remember that we are all sons and daughters of the same God and that we are brothers and sisters to each other.”

“We have to break that cycle of violence and hatred and bigotry, otherwise it will be contagious like a virus,” Cardinal Cupich said.

As the Year of Mercy was ending, Pope Francis called on the new cardinals — and everyone present in the basilica — to continue to proclaim “the Gospel of mercy,” going out to where people live, giving them hope and helping them become signs of reconciliation.

At the end of the consistory, the College of Cardinals had 228 members, 121 of whom are under the age of 80 and eligible to vote in a conclave to elect a pope. 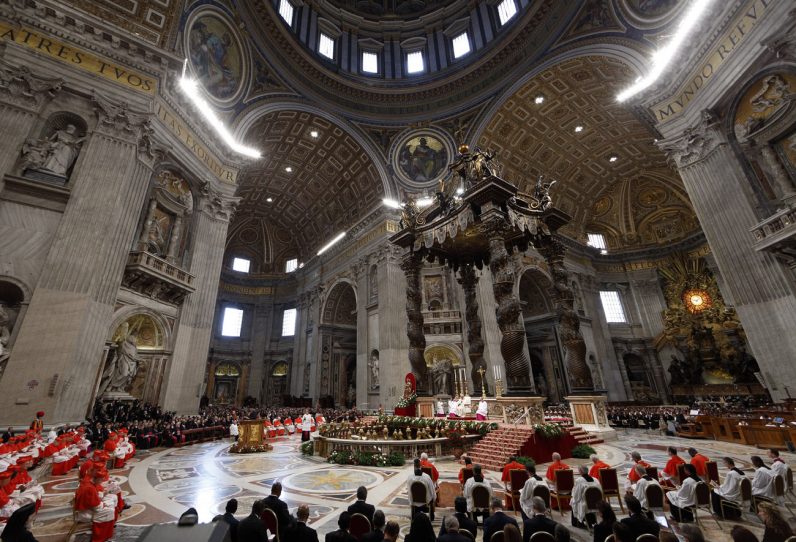 NEXT: Pope extends special Year of Mercy provisions on confession