In Holy Year, God planted seeds that will grow into ‘good, simple things’ 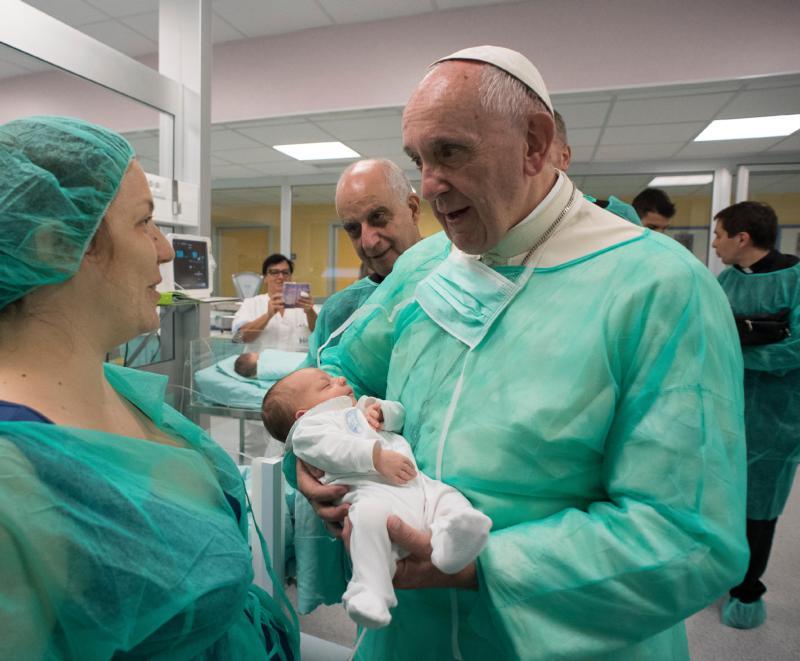 Pope Francis holds a baby as he visits the neonatal unit at San Giovanni Hospital in Rome Sept. 16, a visit that was part of the pope's series of Friday works of mercy during the Year of Mercy. The Year of Mercy was declared to help us to understand just how essential God's mercy is to the Christian faith, and how living a life of mercy is essential to living that faith. (CNS photo/L'Osservatore Romano)

VATICAN CITY (CNS) — Visiting young women rescued from forced prostitution and meeting with a mother inconsolable over the loss of one of her newborn triplets are images from the Year of Mercy that Pope Francis said remain impressed on his heart.

Reviewing the Holy Year in a 40-minute interview aired Nov. 20 on TV2000, a television station owned by the Italian bishops’ conference, Pope Francis also spoke about handling stress, his upcoming 80th birthday and a sense of humor, among other topics.

Asked about the Mercy Friday visits he made once a month during the Holy Year, the pope said the visit with women rescued from human trafficking and his visit to the neonatal ward of a Rome hospital were the visits that stand out.

Visiting Rome’s San Giovanni Hospital in September, he said, “there was a woman who cried and cried and cried standing by her two infants — tiny, but beautiful. The third had died.”

“She cried for that dead child while she caressed the other two,” the pope said. “It’s the gift of life.”

“And I thought of the practice of getting rid of babies before they are born — this horrible crime. They get rid of them because ‘it’s better that way,’ because it is easier, ‘it is a big responsibility.’ That is a serious sin,” the pope said. “This woman had three children and wept for the one who died; she was unable to console herself with the two remaining.”

The other Mercy Friday event that was powerful, he said, was visiting a community of 15 young women who had been rescued from the traffickers who had forced them into prostitution.

One from Africa, “very beautiful, very young,” was pregnant. And she told the pope that her traffickers had beat and tortured her, even when she was pregnant. In a previous pregnancy, they made her work the streets the whole time.

“She told me, ‘Father, I gave birth on the street in winter. Alone. All alone. My daughter died,'” the pope said, clutching his heart.

Pope Francis said he believes God used the Year of Mercy to plant seeds and “I believe the Lord will make grow good, simple, daily things in the life of the people — nothing spectacular.”

The pope has told interviewers before that he prays a prayer of St. Thomas More that includes the request, “Grant me, O Lord, a sense of good humor. Allow me the grace to be able to take a joke to discover in life a bit of joy, and to be able to share it with others.”

The TV2000 interviewers said that sounded strange coming from a pope and asked him why.

“A sense of humor gives you relief, it helps you see what is temporary in life and take things with the spirit of a soul who has been redeemed,” the pope said. “It’s a human attitude, but it is very close to the grace of God.”

Having a sense of humor, he said, helps one be like a child before God and “to praise the Lord with a smile, but also a joke well told.”

The interviewers began a question, “Holy Father, in a month you will be 80 …” but he cut them off, “Who me?”

Insisting, they asked the pope how he manages to do all he does. The pope joked that he has “magic tea,” but then said what helps most is prayer. “That helps me a lot. I pray. Prayer is a help; it is being with the Lord. I celebrate Mass, pray the breviary, speak to the Lord, pray the rosary.”

Another thing, he said, is “I sleep well, which is a gift from the Lord. I sleep like a log” six hours each night.

Is it easier to put up with “detractors” or with “the false admiration” of sycophants, he was asked. “The second!” he responded.

In Argentina, he said, they would be referred to as “sock-lickers” — like bootlickers — “which is a really good name.”

As for critics, the pope said that he knows he deserves criticism because he is a sinner, so even if a specific critique is not fair, he still deserves it.

NEXT: Proclaim Christ the king of mercy, pope says at end of Holy Year