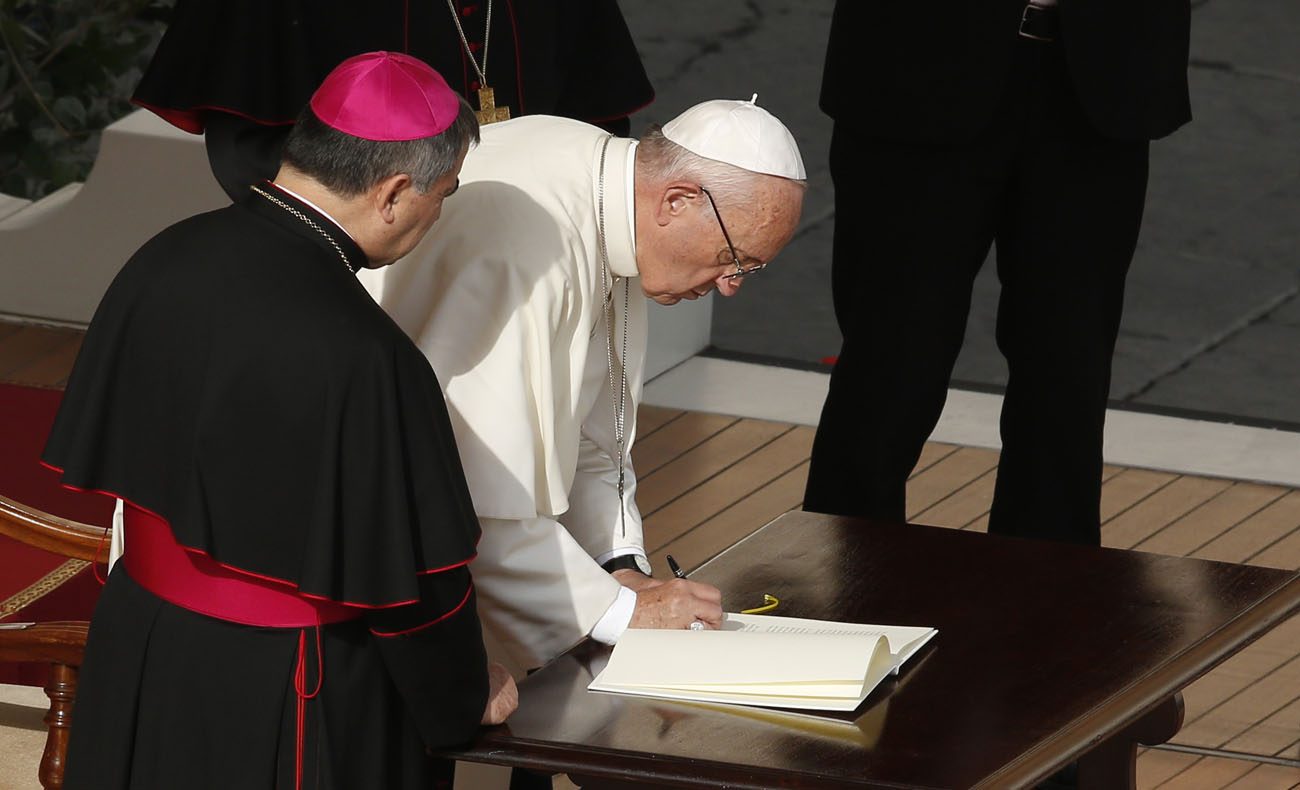 Pope Francis signs an apostolic letter, "Misericordia et Misera," (Mercy and Misery) after celebrating the closing Mass of the jubilee Year of Mercy in St. Peter's Square at the Vatican Nov. 20. In the letter the pope called for several special initiatives begun during the Year of Mercy to continue on a permanent basis. (CNS photo/Paul Haring)

VATICAN CITY (CNS) — Acknowledging and sharing God’s mercy is a permanent part of the Christian life, so initiatives undertaken during the special Year of Mercy must continue, Pope Francis said.

“Mercy cannot become a mere parenthesis in the life of the church,” the pope wrote in an apostolic letter, “Misericordia et Misera,” (“Mercy and Misery”), which he signed Nov. 20 at the end of the Year of Mercy. The Vatican released the text the next day.

The Catholic Church’s focus on God’s mercy must continue with individual acts of kindness, assistance to the poor and, particularly, with encouraging Catholics to participate in the sacrament of reconciliation and making it easier for them to do so, the pope wrote.

In his letter, Pope Francis said he formally was giving all priests permanent permission to grant absolution to those who confess to having procured an abortion. While many bishops around the world, and almost all bishops in the United States, routinely grant that faculty to all their priests, Pope Francis had made it universal during the Holy Year.

According to canon law, procuring an abortion brings automatic excommunication to those who know of the penalty, but procure the abortion anyway. Without formal permission, priests had been required to refer the case to their bishops before the excommunication could be lifted and sacramental absolution could be granted to a woman who had an abortion or those directly involved in the procedure.

“I wish to restate as firmly as I can that abortion is a grave sin, since it puts an end to an innocent life,” the pope wrote. “In the same way, however, I can and must state that there is no sin that God’s mercy cannot reach and wipe away when it finds a repentant heart seeking to be reconciled with the Father.”

Speaking to reporters during a Vatican news conference Nov. 21, Archbishop Rino Fisichella said procuring an abortion still results in automatic excommunication the very moment the procedure is carried out.

Sacramental absolution, therefore, is not just forgiving the sin of abortion, but also means “the excommunication is removed,” he said.

Now that all priests have been given the faculty to lift the excommunication and grant absolution, the Code of Canon Law will have to be updated, said the archbishop, who is president of the Pontifical Council for Promoting New Evangelization, the office that organized events for the Year of Mercy.

The pope also formally extended the provision he made during the Year of Mercy of recognizing as valid the sacramental absolution received by “those faithful who, for various reasons, attend churches officiated by the priests of the Priestly Fraternity of St. Pius X,” the traditionalist society founded by the late Archbishop Marcel Lefebvre.

Although the Vatican and the society continue talks aimed at formally restoring the society’s full communion with the church, Pope Francis said he was extending the pastoral provision “lest anyone ever be deprived of the sacramental sign of reconciliation through the church’s pardon.”

The title of the document is taken from a sermon by St. Augustine about Jesus’ encounter with the woman caught in adultery. After those who wanted to stone her slinked away, only Jesus and the woman — mercy and misery — remained.

In the Gospel story, the pope wrote, and in the sacraments of the church, particularly confession and the anointing of the sick, “references to mercy, far from being merely exhortative, are highly performative, which is to say that as we invoke mercy with faith, it is granted to us, and as we confess it to be vital and real, it transforms us,” as it did with the woman caught in adultery.

“This is a fundamental element of our faith,” Pope Francis wrote.

“Even before the revelation of sin, there is the revelation of the love by which God created the world and human beings,” he wrote. “His love always precedes us, accompanies us and remains with us, despite our sin.”

In celebrating and welcoming God’s love and mercy, he said, a special place in the church must be given to families, especially at a time when the very meaning of family is in crisis.

“The beauty of the family endures unchanged, despite so many problems and alternative proposals,” he said. “The grace of the sacrament of marriage not only strengthens the family to be a privileged place for practicing mercy, but also commits the Christian community and all its pastoral activity to uphold the great positive value of the family.”

Still, he wrote, “the experience of mercy enables us to regard all human problems from the standpoint of God’s love, which never tires of welcoming and accompanying,” even in situations marked by failure or sin.

“Our life, with its joys and sorrows, is something unique and unrepeatable that takes place under the merciful gaze of God,” he said. In counseling couples priests must use “a careful, profound and far-sighted spiritual discernment, so that everyone, none excluded, can feel accepted by God, participate actively in the life of the community and be part of that People of God which journeys tirelessly toward the fullness of his kingdom of justice, love, forgiveness and mercy.”

“Nothing of what a repentant sinner places before God’s mercy can be excluded from the embrace of his forgiveness,” the pope wrote. “For this reason, none of us has the right to make forgiveness conditional.”

In the letter, Pope Francis also asked dioceses that have not yet done so to consider joining the “24 Hours for the Lord” initiative. Near the fourth Sunday of Lent, dioceses choose a church or churches to stay open for 24 hours to offer the sacrament of reconciliation and eucharistic adoration. The pope opens the Rome celebration with a penance service in St. Peter’s Basilica.

After his Year of Mercy celebration Nov. 13 with the homeless and other people who are “socially excluded,” the pope wrote that he would like a similar celebration to be held annually in every diocese.

“The entire church might celebrate, on the 33rd Sunday of Ordinary Time, the World Day of the Poor,” he said. The celebration, a week before the feast of Christ the King, would be “the worthiest way to prepare” to acknowledge the kingship of Christ, “who identified with the little ones and the poor and who will judge us on our works of mercy.”

“It would be a day to help communities and each of the baptized to reflect on how poverty is at the very heart of the Gospel and that, as long as Lazarus lies at the door of our homes, there can be no justice or social peace,” he said.

Calling the Bible “the great story of the marvels of God’s mercy,” Pope Francis also asked every Catholic parish in the world to set aside at least one Sunday a year to promote reading, studying and praying with the Scriptures.

Teaching people “lectio divina,” the prayerful reading of the Bible, especially when focused on texts that speak of God’s mercy and love, will help “give rise to concrete gestures and works of charity,” he wrote.

In another continuation of a Year of Mercy project, Pope Francis asked the more than 1,100 priests he commissioned as “missionaries of mercy” to continue leading retreats, missions, prayer services and offering confession in dioceses around the world.

“Their pastoral activity sought to emphasize that God places no roadblocks in the way of those who seek him with a contrite heart, because he goes out to meet everyone like a father,” the pope said.

While he said he did not have specifics about how the missionaries’ work should continue, Pope Francis said the Pontifical Council for the Promotion of the New Evangelization “will supervise them and find the most suitable forms for the exercise of this valuable ministry.”

PREVIOUS: Pope calls new cardinals to be agents of unity in divided world

NEXT: In Holy Year, God planted seeds that will grow into ‘good, simple things’