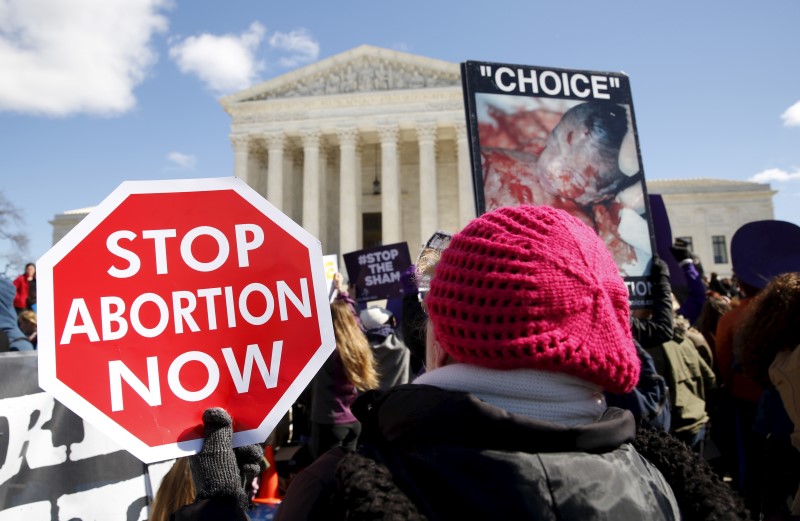 Leaders in organizations such as U.S. bishops’ Secretariat of Pro-Life Activities; National Right to Life, Americans United for Life and Susan B. Anthony List told Catholic News Service that they are hopeful that Congress and eventually the Supreme Court, with pro-life justices in place, will take steps to achieve the long-standing goal of ending abortion altogether.

“We are very excited about the new Trump administration because he took such a strong stand during the campaign,” said Carol Tobias, president of National Right to Life. “I think it’s going to be a great few years.”

Such enthusiasm stems not just from Trump’s unexpected election, but also because Republicans maintained control of both the House of Representatives (241-194) and the Senate (52-48), although with slimmer margins. As a result, the fear of a veto of pro-life legislation has virtually vanished.

Advocates also are pleased that Trump has not indicated any deviance from a campaign pledge he delivered to a coalition of groups opposed to abortion. In a September letter to pro-life leaders, Trump said he was committed to four cornerstones of the pro-life movement:

— Sign into law the Pain-Capable Unborn Child Protection Act, which would prohibit abortion after 20 weeks of gestation, about the time doctors have determined that an unborn child can feel pain.

Greg Schleppenbach, associate director of the Secretariat of Pro-Life Activities at the U.S. Conference of Catholic Bishops, welcomed the commitments, but said he would maintain a “cautious optimism” that they would be carried out.

“Certainly, based upon things President-elect Trump said he will do, there’s some reason for optimism. It remains to be seen if he follows through on what he said he would do,” Schleppenbach said.

While making the Hyde Amendment permanent would be welcomed, Schleppenbach said, passing the No Taxpayer Funding for Abortion Act would ensure no federal money whatsoever is used for abortion, including under the Affordable Care Act. The bill has been introduced in the past three Congresses and passed by the House each time, but has stalled in the Senate.

Still, advocates in the pro-life movement have mobilized quickly to ensure that pro-life bills will be considered by the new sessions of Congress and state legislatures.

“We will see (a) pain capable (bill) advance. It passed the House previously and it was voted on in the Senate,” said Marilyn Musgrave, vice president of government affairs at the pro-life Susan B. Anthony List.

She called the current period hopeful for pro-lifers. “It’s a time when we have to give all we have to advance the cause for life at a time when the country rejected Hillary Clinton and her party’s extreme position on life,” she said.

Even with expected action by Congress, the advocates said they feel emboldened to take steps to pass key pieces of legislation, including the so-called “pain capable” bills at the state level. Ohio serves as an example of what’s ahead. Republican legislators inserted a pain-capable bill in end-of-year-legislation in December. It was signed into law by Gov. John Kasich Dec. 13.

Thirteen states have enacted pain capable laws that have gone unchallenged, although similar bans have been struck down by courts in Arizona and Idaho.

A second bill in Ohio adopted by the Legislature in December would have banned abortion when a fetal heartbeat could be detected, usually around six weeks of a pregnancy. It would have been the country’s most restrictive abortion law. Kasich vetoed that provision at the urging of Ohio Right to Life; both the governor and the pro-life group have said they did not believe it would have been upheld in court and he acted to save taxpayer dollars. Similar bans elsewhere have been overturned in the courts. Ohio Right to Life leaders pointed out if the heartbeat measure became law and was challenged in court, a federal judge could strike it down along with abortion restrictions.

Pro-life groups are divided on the strategy of pursuing fetal heartbeat laws. While some groups want to see bills introduced, others believe federal courts would overturn them and harm the overall pro-life movement by contributing additional legal precedence in support of abortion.

Beyond that issue though, voters can expect to see other abortion-related bills come before state legislatures, Tobias said. In one area, National Right to Life is working with other organizations on state bans of dilation and evacuation abortion procedure — which pro-life advocates describe as “dismemberment” — that is commonly used during the second trimester of pregnancy.

Bills that offer conscientious protections for health care workers also are expected to be reintroduced.

While legislative victories are expected — and expected quickly — Clark Forsythe, acting president of Americans United for Life, suggested patience would be a virtue for pro-life advocates to embrace.

“Every Supreme Court vacancy is going to be a hard fight. People have to have patience and look at it as this two-year Congress and then the opportunity to add to the Senate majority in the 2018 mid-term elections and then two more years of the Trump-Pence administration’s first term,” he said.

Supporters of keeping abortion legal are concerned about what they consider to be attacks on a women’s right to choose the care she receives. Planned Parenthood chapters in many states have begun fundraising efforts to close the gap should federal funding of its programs end.

Other organizations, such as the American Civil Liberties Union, have said they will fill lawsuits to prevent what they consider to be excessive restrictions on abortion from taking effect.

Even with things expected to go their way in the White House, Congress and state legislatures, pro-life advocates recognize that parishioners and other churchgoers who oppose abortion will have to remain vigilant because of the strong push back expected from the supporters of keeping abortion legal.

Unity in messaging will be the key said the USCCB’s Schleppenbach.

“Certainly forming and preparing our grass roots, which is really, as the church, our grass roots is our biggest strength as a lobbying force,” he explained. “So we will certainly make sure that we have our grass roots informed and energized and ready to act and to communicate with our representatives.”

PREVIOUS: Burlington Diocese to celebrate Year of Creation in 2017