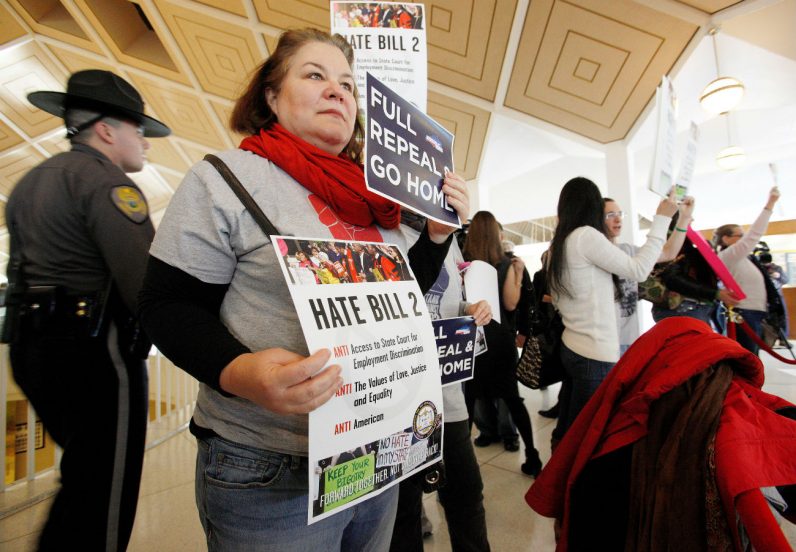 FARGO, N.D. (CNS) — The Catholic Benefits Association, the Diocese of Fargo and Catholic Charities North Dakota filed a lawsuit Dec. 28 in U.S. District Court in North Dakota against a federal regulation scheduled to take effect Jan. 1 that redefines “sex” for anti-discrimination purposes to include sexual orientation and gender identity.

The regulation from the Department of Health and Human Services requires that Catholic hospitals and health care providers perform or provide gender transition services, hormonal treatments and counseling as well as a host of surgeries that would remove or transform the sexual organs of men or women transitioning to the other gender. The HHS regulation requires group health plans to cover these procedures and services.

“We ask only for the freedom to serve consistent with our conscience and our Catholic faith,” Bishop John T. Folda of Fargo said in a statement, released by the Catholic Benefits Association. “While we do not discriminate against individuals because of their orientation, our Catholic values will not permit us to pay for or facilitate actions that are contrary to our faith.”

The Catholic Benefits Association is made up of Catholic dioceses, hospitals, school systems, religious orders and other entities that offer their employees insurance and benefit programs that adhere to Catholic teaching.

The regulation, which also mandates abortions be performed, affects health insurers, hospitals and health plans administered by or receiving federal funds from HHS. There is no religious exemption.

The final HHS regulation was published in May. It applies to implementing Section 1557 of the Affordable Care Act, which provides that individuals cannot be subject to discrimination based on their race, color, national origin, sex, age or disability.

It cites Title VII of the Civil Rights Act of 1964 and Title IX of the Education Amendments Act of 1972. Title VII prohibits employers from discriminating against employees on the basis of sex, race, color, national origin, and religion. Title IX states: “No person in the United States shall, on the basis of sex, be excluded from participation in, be denied the benefits of, or be subjected to discrimination under any education program or activity receiving federal financial assistance.”

Title IX does have an exemption for religious organizations, but the HHS regulation does not include that language.

“For decades, Congress and the courts have understood the term ‘sex’ in federal law to mean biological sex — male and female,” Archbishop William E. Lori of Baltimore, chairman of the Catholic Benefits Association, said in a statement.

“By redefining ‘sex’ to mean both ‘gender identity’ and ‘termination of pregnancy,’ the Obama administration is not only trying to sidestep Congress and impose radical new health care mandates on hospitals and employers, it is creating a moral problem for Catholic employers that must be addressed,” he added.

In their lawsuit the plaintiffs argue that among other federal laws, the new regulation violates:

— The Administrative Procedure Act, a federal statute that governs the way administrative agencies of the U.S. government may propose and establish regulations.

— The Religious Freedom Restoration Act, prohibits the federal government from substantially restricting a person’s religious freedom, except when it can demonstrate “a compelling government interest” and that the government’s action is “the least restrictive means” of furthering that interest.

— The religious freedom protections of the First Amendment.

Two other lawsuits have been filed. The Washington-based Becket Fund filed suit in U.S. District Court for the Northern District of Texas in Wichita Falls on behalf of Franciscan Alliance, a religious hospital network sponsored by the Sisters of St. Francis of Perpetual Adoration, and the Christian Medical & Dental Associations, defending them from the new government regulation. The states of Texas, Kansas, Kentucky, Nebraska and Wisconsin also joined in the suit.

The District Court heard arguments in the case Dec. 20. The plaintiffs’ motion is for partial summary judgment to dispose of the case without a trial. The lawsuit was first filed Aug. 23; three other states — Louisiana, Arizona and Mississippi — later joined as plaintiffs in the case.

The Becket Fund filed another lawsuit Nov. 7 in U.S. District Court for the District of North Dakota on behalf of the Sisters of Mercy; the University of Mary, a Catholic university near Bismarck, North Dakota; and SMP Health System.

The state of North Dakota has since joined the suit. In this case, the plaintiffs are seeking a preliminary injunction to stop the mandate from going into effect.