Many numbers, one result: What polling can and cannot do 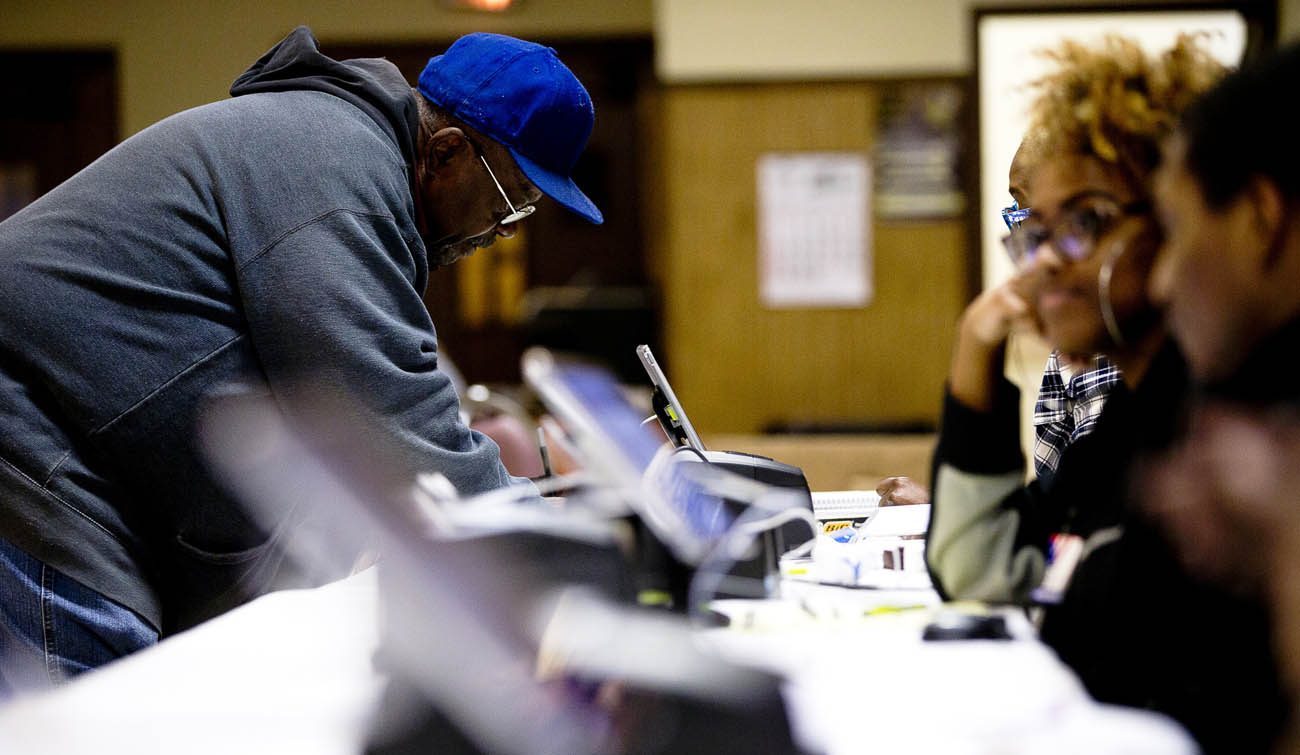 A man signs in to vote in the John Bailey Room at St. Francis Xavier Church in Washington Nov. 8. (CNS photo/Tyler Orsburn)

WASHINGTON (CNS) — Four years ago around this time, Americans were wondering about the death of public-opinion polling in an entirely different vein. Then, Nate Silver of the FiveThirtyEight website had correctly called every state and its delegate count in the 2012 presidential election, rendering most other forms of punditry pretty much useless.

Except that in 2016, pollsters who were long predicting a Hillary Clinton win in November’s presidential sweepstakes were proved wrong. Or were they?

Donald Trump definitely won a clear majority of the Electoral College’s 538 votes, with 306; Michigan’s 16 were the last to be decided, although the results there and a handful of other states have been challenged by Green Party presidential hopeful Jill Stein, who finished fourth behind Libertarian Party candidate Gary Johnson.

But Clinton won the popular vote. With votes counted through November, she got 64.87 million to Trump’s 62.52 million, or 48.1 percent for Clinton as opposed to 46.4 percent for Trump. By comparison, President Barack Obama won his 2008 and 2012 elections with a majority of the popular vote and electoral votes. He was the first candidate to win back-to-back in the popular vote since Ronald Reagan in 1980 and 1984.

“I think there’s going to be a lot of soul-searching among pollsters,” said Dan Cox, research director for the Public Religion Research Institute, which had, a week before the election, released poll results showing Catholics preferring Clinton by a 5-to-4 margin over Trump, with white women and Latinos giving Clinton the edge.

Barbara Carvalho, associate director of the Marist Poll, based at the Marist College in New York, took a different view.

“Our perception was that this was a very close contest,” she told Catholic News Service. “Anecdotally as a pollster, people come up to me before an election and they want to know, who is going to win? One thing I did say to people prior to Election Day, this is a very close election. Our perception is that you had two candidates not terribly well-liked but very well-known who both had enough supporters to win.

“The characterization of the election as being over before the votes were counted was one that was not just based upon the results of polls but also upon the results of how pollsters — particularly aggregators who are averaging the results of polls — judged that information,” Carvalho continued. “Pollsters weren’t the ones saying Hillary Clinton had a 98 percent chance of winning, especially if you looked at the polls going into the last weekend. If you look at a popular vote of 1 or 2 percent for Clinton, and when you look at national polls, many of them, like us, had it tied, 1 percent, 2 percent” differences — the “virtual tie,” in pollster-speak.

While some pollsters have used online surveys, the more reliable method is telephone surveys, Carvalho said. A combination of cellphones and landlines are used, but landline response must be weighted because those respondents are typically older and wealthier than cellphone users, she added. And a new federal regulation that took effect this campaign season barred the use of automation in dialing cellphones.

Pew Research Center pollsters Andrew Mercer, Claudia Deane and Kyley McGeeney, in a day-after analysis posted on Pew’s website Nov. 9, fingered non-response bias as “a likely culprit.” “Certain kinds of people systematically do not respond to surveys despite equal opportunity outreach to all parts of the electorate. We know that some groups — including the less-educated voters who were a key demographic for Trump on Election Day — are consistently hard for pollsters to reach,” the trio said. “The result would be a strongly pro-Trump segment of the population that simply did not show up in the polls in proportion to their actual share of the population.”

They added, “Some have also suggested that many of those who were polled simply were not honest about whom they intended to vote for. The idea of so-called ‘shy Trumpers’ suggests that support for Trump was socially undesirable, and that his supporters were unwilling to admit their support to pollsters.”

PRRI’s Cox offered a different take on the latter phenomenon. Despite the numbers they generate, he said, they offer only a snapshot, not a crystal ball. “They’re really not meant to be all that predictive. People are not really good at predicting what they’re going to do — even about what they’re going to eat today in health surveys. This is a really poorly designed instrument to predict the future,” he added, “which is all subject to change.”

Cox coupled that with one big difference from the 2012 Obama-Mitt Romney contest in the number of undecided voters. “In mid-October, when we stopped polling, one in 10 were undecided,” he said. “What happened, faced with two really unpopular candidates, people held their nose and picked one or the other, and they almost all broke for Trump. Whether it was the message of change, the FBI (briefly reopening the investigation into Clinton’s emails as secretary of state), Trump really probably sealed the deal in Wisconsin, Michigan and Pennsylvania (with) voters who decide late.”

He added polling in those states was not as painstaking as elsewhere because they had historically been Democratic states in past presidential elections, and figured to stay the same in 2016 — and that only 75 percent of those who had said they were “leaning” toward Clinton actually voted for her, compared to 84 percent of those leaning toward Trump who voted for him.

Marist’s Carvalho said FBI director James Comey’s letter to Congress announcing a reopening of the investigation — it ended a couple of days before the election upon when it was learned the emails in question were the same emails reviewed previously — may have played a factor in Clinton’s surprise loss. Clinton, within a week of the election, blamed the Comey letter for costing her the presidency.

Or did it? “We certainly saw a change that final week. There was no question,” Carvalho said. “It could be accounted for by the letter. But the Clinton campaign had also changed their messaging. That transpired at about the same time. They had changed their messaging from Trump being someone who was a risk to, in addition to voting for Clinton, get her the (majority of the) Senate as well.”

Pew spokeswoman Anna Schiller said it might not be until May before pollsters learn what went wrong for so many of them. “The sheer amount of national and state-level polls for the primaries and the general election that were published leading up to the election pollsters” has to be examined by the American Association of Public Opinion Research, she said in an email to CNS.

“Doing the work is becoming increasingly expensive,” Cox said. “But we’re committed to it.”

NEXT: Iraqi Christians in U.S. pray to reunite with family at Christmas