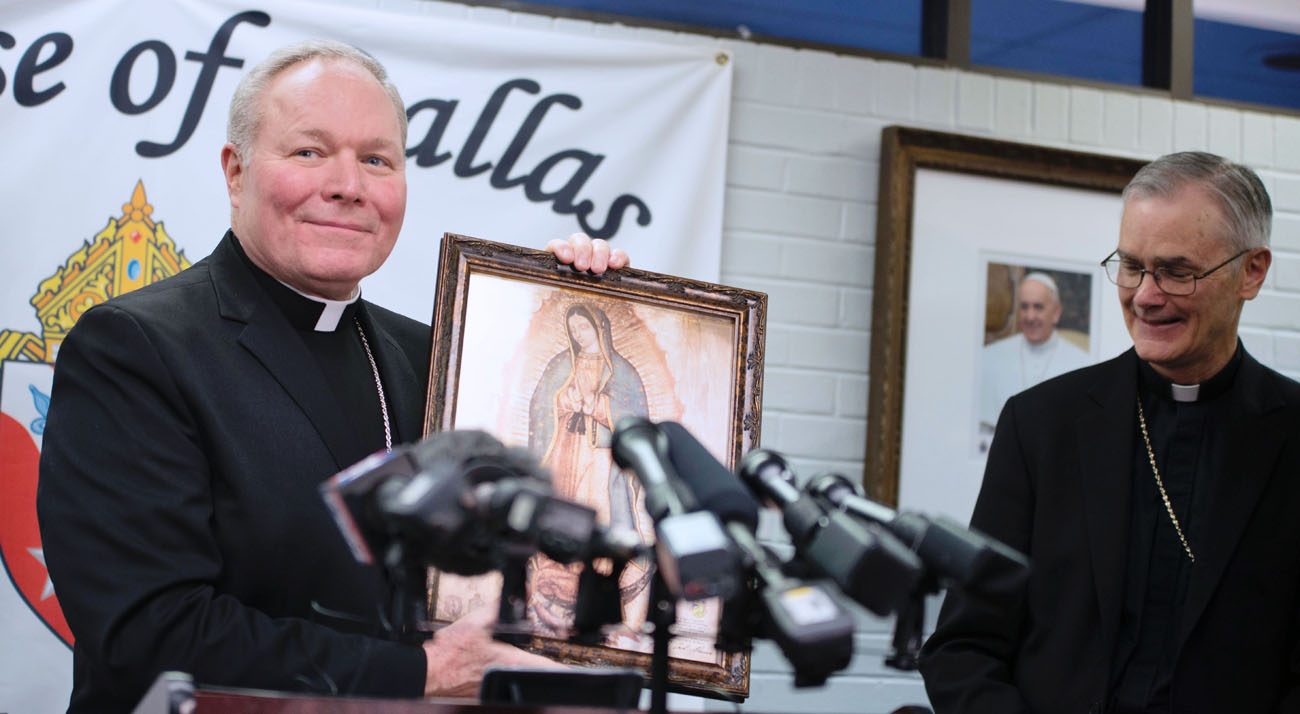 Bishop Edward J. Burns of Juneau, Alaska, accepts a portrait of Our Lady of Guadalupe as a gift from the Dallas Diocese Dec. 13 after answering questions from members of the media about Pope Francis appointing him that day as the eighth bishop of Dallas. (CNS photo/Jenna Teter, The Texas Catholic)

DALLAS (CNS) — Bishop Edward J. Burns met with staff at the Catholic pastoral center in Dallas the morning of Dec. 13, asking for their prayers, telling them that he had already been praying for them and saying that he looked forward to working with them and others doing God’s work.

Head of the Diocese of Juneau, Alaska, since 2009, Bishop Burns, 59, was named that day by Pope Francis to be the next bishop of the Diocese of Dallas, succeeding Cardinal Kevin J. Farrell, who is now the prefect of the new Vatican office for the laity, family and life.

“I do see a joy in their faces as they serve,” Bishop Burns said of diocesan staff at a news conference later in the day.

He will be installed as the eighth bishop of Dallas Feb. 9 at the Cathedral Shrine of the Virgin of Guadalupe in Dallas.

At the news conference, he also talked about his years of service to the church and talked about the importance of priests, women religious, deacons, seminarians, the laity and the parishioners in the pews to the life of the church.

“To my brother priests, I say to you, ‘Stay strong and stay faithful. I look forward to working side by side with you,'” Bishop Burns said. “To the seminarians of this diocese, I say, ‘We need you! We need more men like you. Pray for the courage to enter the mystery of God’s plan for your life.'”

He thanked the deacons for their ministry of service, and told the men and women in consecrated life, “May your witness to the Gospel of Jesus Christ be blessed and bear much fruit.”

Bishop Burns said called the ministry of lay ministers catechists of the diocese “a blessing.” He told them, “Your good work in essential in advancing the mission of the church.”

“To all the faithful of our parishes, ‘Stay close to Jesus Christ. May he strengthen you through the celebration of his word and his sacraments,'” he continued. “To my brothers and sisters who no longer attend church, I invite you to come home for Christmas. Your presence helps complete the parish family.”

Acknowledging and apologizing that he did not speak Spanish in a diocese where many of the 1.3 million Catholics are of Hispanic origin, he said he would learn it quickly.

He also said that he would remind immigrants that the church is in solidarity with them and said that he looked forward to celebrating Mass at the Cathedral Shrine of the Virgin of Guadalupe during the feast day next Dec. 12.

“I look forward much to learning about their culture,” he said. “I look forwarding to learning their language because in my being called a shepherd,” he said, before switching to Spanish and adding, “Yo so Eduardo — tu hermano y tu obispo (I am Edward — your brother and your bishop.)”

Bishop Burns called himself a prayerful man and said that at first glance it may seem that coming from a small diocese would present a challenge in administering one of the fastest-growing dioceses in the country.

The 37,600-square-mile Diocese of Juneau is considered one of the U.S. church’s home mission dioceses. Out of a total population of 75,000, it has 10,000 Catholics and has one Catholic school.

By contrast, the nine-county Dallas Diocese is home to more than 70 parishes, many whose congregation swells beyond 10,000, and it has approximately 15,000 students in diocesan and private Catholic schools. The Dallas Diocese also is home to numerous Fortune 500 companies, including AT&T, Exxon-Mobil, Toyota of America, among other regional conglomerates.

The diocese, under then-Bishop Farrell’s leadership, recently completed a $125 million capital campaign and has consolidated four diocesan elementary schools into academies and seen the renovation of numerous parishes and schools.

He said that he hoped to build upon the great work of then-Bishop Farrell over his nearly 10 years as the leader of the Diocese of Dallas and that he would begin by visiting parishes and schools throughout the diocese in order to hear from others about the challenges that remain for the Dallas diocese.

“I had a chance to thank him for the good work he has done in this wonderful diocese,” Bishop Burns said. “I am personally aware of his generous service, not only to his local church, but also the national church and now to the universal church.

“I know I am going to sit in my new office in which he labored in and toiled in, and I am going to truly build on his great work,” he said. “I am going to be one who is not going to attempt to fulfill all that he has to offer, but simply build on that.”

Bishop Burns is the current chairman of the U.S. Conference of Catholic Bishops’ Committee on the Protection of Children and Young People. He also is a member of the bishops’ Subcommittee on Catholic Home Missions and has been a member of their Administrative Committee.

He is a former rector of St. Paul’s Seminary in Pittsburgh and former director of the U.S. bishops’ national offices dealing with clergy, vocations and priestly formation.

Sedeno is editor of The Texas Catholic, newspaper of the Diocese of Dallas.