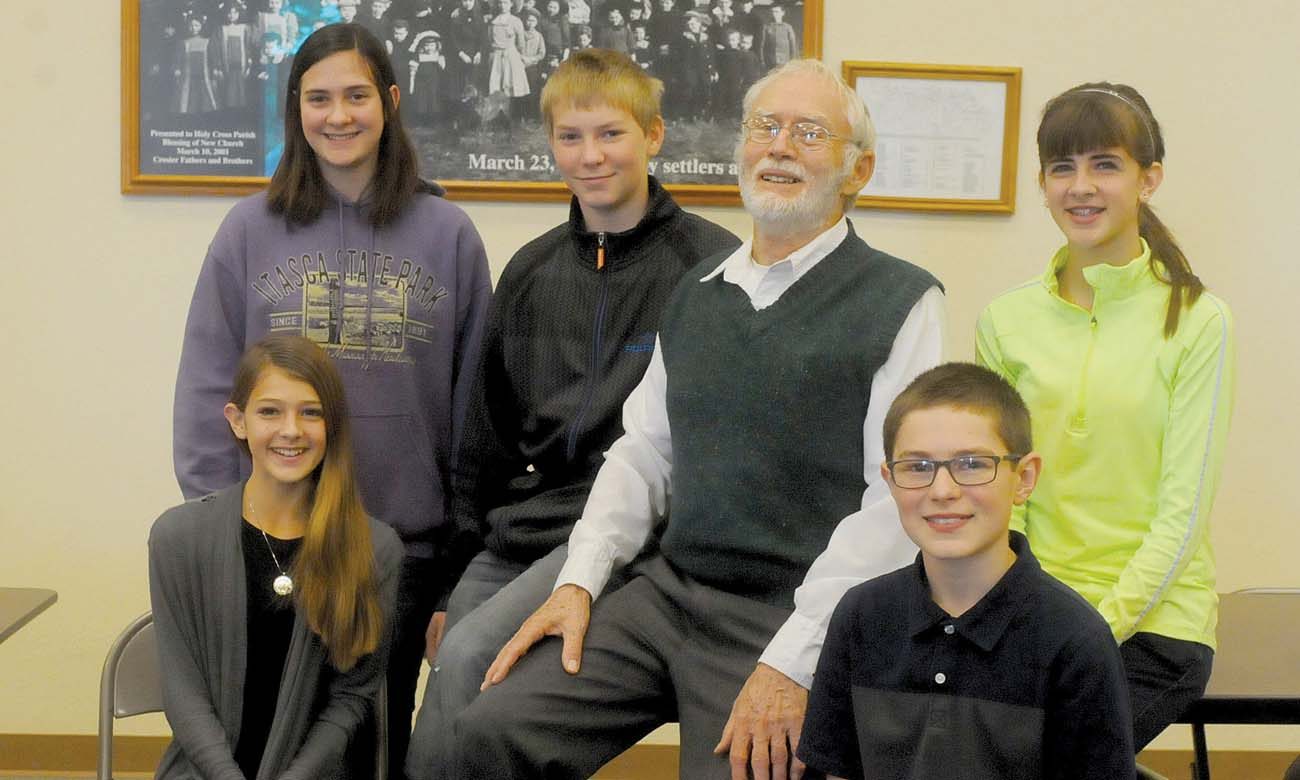 Father Tony Kroll, a longtime investor in micro-loans, poses with youth at Holy Cross Parish in Butler, Minn., Nov. 20. Pictured with him are: front from left, Kami Steinbach and Jack Peeters; from left back, Molly Swanz, Abe Carlson and Kalli Steinbach. Not pictured are Ben Minton, Jimmy Minton and Grace Minton. (CNS photo/Dianne Towalski, The Visitor)

BUTLER, Minn. (CNS) — Many years ago, a woman in Nicaragua was poor, but she had a sewing machine. She was lucky because it offered a way to make money that a lot of women in her country didn’t — and still don’t — have.

A customer gave her $5 to make a shirt, but she had to travel by bus an entire day to get the material and thread she needed to complete the project. The customer felt bad that she had to spend so much time and money, so he gave her five more dollars so she could make a profit.

Father Tony Kroll recalled that story — wearing the shirt the woman had made for him — during an annual potluck and raffle fundraiser organized recently by middle-school faith formation students at Holy Cross Church in Butler, in the St. Cloud Diocese. He attended the event to help the youth raise money to invest in micro-loans that will help people in developing countries start their own businesses.

“If she could get a loan for, say, $500, she would only have to go once a month to town to buy supplies, and she could work for the whole month and make a living sewing shirts,” Father Kroll told the youth and guests at the potluck event.

A micro-loan is a small, short-term loan with a low interest rate usually granted to start a business. The loans are administered by a nonprofit organization, in this case, Working Capital for Community Needs, based in Madison, Wisconsin.

According to the nonprofit, 64 percent of its nearly 28,000 borrowers are women, and the average micro-loan is just over $1,200.

Earlier in the school year, the students talked about Pope Francis’ challenge to help migrants and refugees, and they wondered what they could do in their small town.

“How could we, in Butler, accept that challenge and do something?” said Mary Peeters, their teacher.

When the idea surfaced for financing a micro-loan, the students were enthusiastic and confident they would be able to raise the $1,000 minimum needed to invest in the program, she told The Visitor, newspaper of the Diocese of St. Cloud.

The students realized that helping someone start a business in a developing country would help that person stay in his or her home.

“I think they would rather stay where they are, instead of going to another country because that’s just like starting over,” said Jack Peeters, a seventh-grader. “And maybe some people don’t like them coming here and that makes it hard for them.”

“They need help to stay where they are living with their family,” said Kalli Steinbach, a ninth-grader. “If they want to stay and do good, they should have the right to do that even if they need help.”

They started the fundraising project in early November with a presentation after Mass. Eighth-grader Kami Steinbach spoke to parishioners about what the students wanted to accomplish, while other students were there dressed as small business owners, including a coffee bean farmer and a baker. They announced that the proceeds from the annual potluck would go to the cause and handed out detailed information about micro-loans. They raised $350 in donations that day.

“It feels nice to be able to help people and to talk to everyone in the community about what we’re doing,” Kami said.

Father Kroll, a retired St. Cloud diocesan priest and a longtime investor in micro-loans, gave Mary Peeters the idea for the project. He knows firsthand how micro-loans can help, having served in the diocese’s mission in Venezuela and leading many mission trips to Latin America.

“This system of micro-credit is capitalism in its simplest form, where we put the dignity of the human person first,” he said. “I get a lot of joy out of just knowing that I can help people stay at home.”

Only when people are forced to find a better place to raise their families do they come to the United States, he noted.

Mary Peeters was overwhelmed with people’s generosity to help her students meet their $1,000 goal, and she’s proud the students are investing in the micro-loan organization.

“It gives them a sense that, regardless of how small you are, you can make a difference,” she said.

Towalski is on the staff of The Visitor, newspaper of the Diocese of St. Cloud.

NEXT: Refugees, migration a front-burner topic throughout 2016