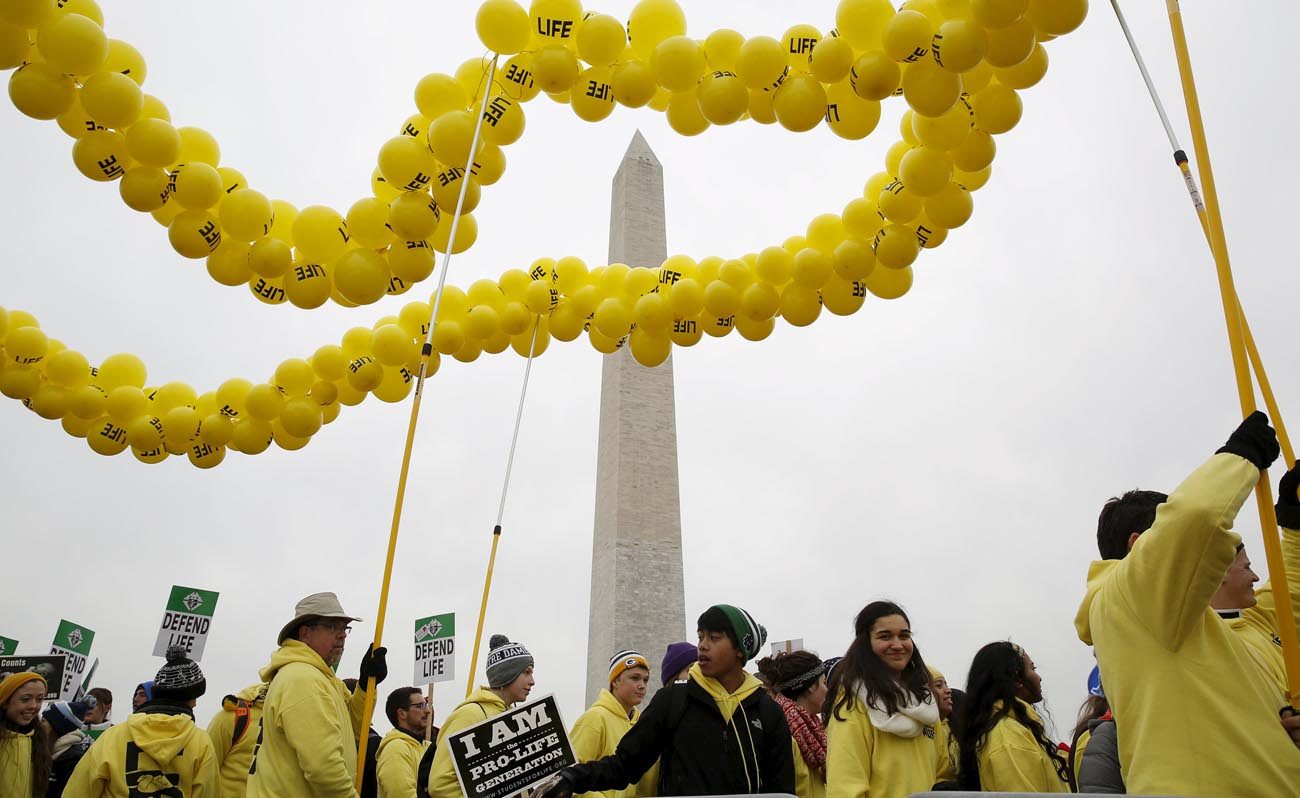 Pro-life supporters gather in front of the Washington Monument during the March for Life in Washington Jan. 22, 2016. (CNS photo/Gary Cameron, Reuters)

WASHINGTON (CNS) — Organizers of the March for Life made it clear Dec. 13 that although they’re “cautiously optimistic” about eventually overturning the Supreme Court’s Roe v. Wade decision with a Donald Trump administration and a Republican-controlled House and Senate, they don’t expect to be in lockstep with other aspects of the new president’s agenda.

“We’re nonpartisan,” said Jeanne Mancini, president of March for Life, adding, “We always advocate that people vote pro-life” without regard to party label. “Difficult as it is, we always try to have a Democratic speaker at the March for Life as well,” she said.

Referring to the president-elect’s volatility on social media, Tom McClusky, the march organization’s vice president of government affairs, remarked: “You always have to worry about the 3 a.m. tweet that’s going to knock your whole agenda off.”

The annual march, which in some years has drawn as many as 100,000 participants, always including busloads of teens from Catholic schools from across the United States, is scheduled for Jan. 27, one week after Trump’s inauguration and five days after the 44th anniversary of the Supreme Court’s Roe v. Wade decision, which legalized abortion virtually on demand.

One of Trump’s initial tasks will be to nominate a new Supreme Court justice to replace Antonin Scalia, a strong pro-life jurist who died in February. That appointment alone is not expected to result in a repeal of legal abortion, but is expected to restore a 5-4 conservative majority on the court.

Mancini also expressed optimism for legislation called the Pain-Capable Unborn Child Protection Act, which has passed the House but remains stalled in the Senate. It would block abortions after the fetus is at least 20 weeks old. “It is our hope that in this administration, late-term abortions will be outlawed,” Mancini said.

Initially, Mancini and McClusky said their expectation is that the Hyde Amendment, considered a temporary fix to block federal funds from paying for abortions, could be made permanent law.

That measure prohibits federal funding of abortion except in cases of rape, incest or threat to the woman’s life. Proposed by the late Republican Rep. Henry Hyde of Illinois and first enacted in 1976, it is an amendment on an appropriation bill Congress must pass each year. It prevents taxpayer funding of abortions in various federal health programs run by the Department of Human Services, which oversees the National Institutes of Health, Medicaid and Medicare, and the Children’s Health Insurance Program, among others.

Mancini said of Trump’s election, “I think in a way we’re recovering from the shock — in a good way. I think there’s such an unexpected sense of hope.”

She had been on the sidewalk in front of the Supreme Court May 27 when the court issued its 5-3 decision in Whole Woman’s Health v. Hellerstedt. The court struck down restrictions on Texas abortion clinics that required them to comply with standards of ambulatory surgical centers and required their doctors to have admitting privileges at local hospitals.

“In a million years, I never thought things would turn the way they’ve turned,” she said.

As for the pre-march rally on the Washington Monument grounds, Mancini said they’ve invited a few individuals they expect to be working in the Trump White House to address the marchers, but have not received confirmations.

Speakers the organizers have confirmed include Karyme Lozano, a star of Mexican telenovelas; Cardinal Timothy M. Dolan of New York, who is chairman of the U.S. bishops’ pro-life committee, and possibly a Hollywood performer, whom Mancini declined to name but described as “open to our issues.”

This year’s theme is “The Power of One.” Mancini said it references both the impact of a single vote and a quote from J.R.R. Tolkien, who wrote in “The Fellowship of the Ring”: “Even the smallest person can change the course of the future.”

PREVIOUS: Sweet harmonies of Missouri cloistered nuns are fruit of their faith