‘We stand with you and we love you,’ Portland archbishop tells immigrants 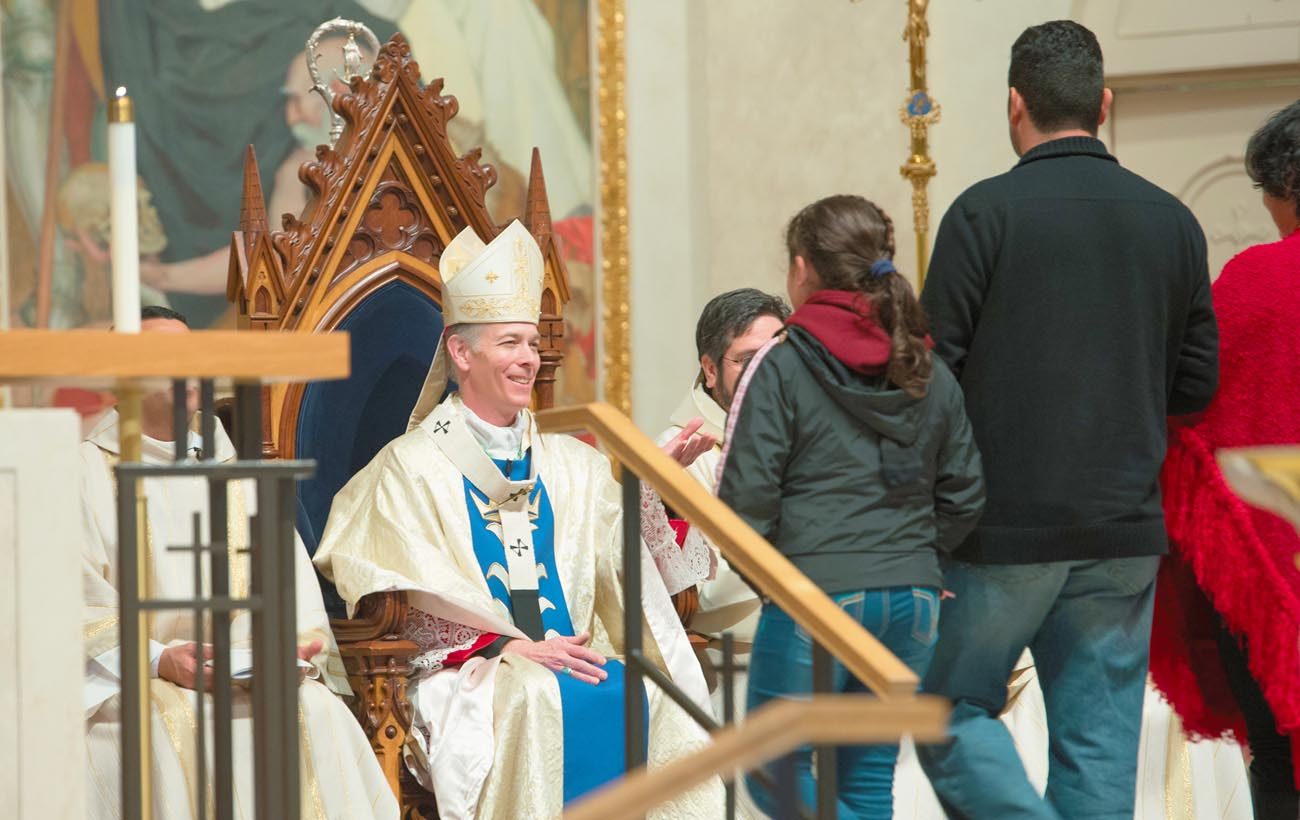 Archbishop Alexander K. Sample of Portland, Ore., accepts the gifts during a Dec. 10 Mass in honor of Our Lady of Guadalupe at St. Mary Cathedral in Portland. "It does not matter to me from where you have come, when you came, or whether you have the proper documents or not," the archbishop told the crowd, which included many immigrants. (CNS photo/Kim Nguyen, Catholic Sentinel)

PORTLAND, Ore. (CNS) — Responding to rhetoric from the recent presidential election, Archbishop Alexander K. Sample of Portland told a crowd of Hispanic Catholics Dec. 10 that he loves them and God loves them.

During the Mass for the feast of Our Lady of Guadalupe, the archbishop then called on all Catholics in western Oregon to condemn racial bigotry and hatred.

“It does not matter to me from where you have come, when you came, or whether you have the proper documents or not. You are loved!” Archbishop Sample said in a bilingual homily at St. Mary’s Cathedral of the Immaculate Conception in Portland. “You are loved by God and precious in his eyes. You are loved by Our Lady of Guadalupe. You are her special children, her little ones, and she will not abandon you.”

The archbishop told the crowd that other western Oregon Catholics also love the Hispanic community, which has felt anxious over anti-immigrant sentiment that became explicit during the campaign.

“We stand with you and we love you,” the archbishop said. “You are one with us. You are a part of us. We are a family. We all enjoy equal dignity and worth before our heavenly Father. We are brothers and sisters in his Son, Jesus.”

The archbishop told worshippers that Catholic Charities of Oregon is advocating for humane and just treatment of immigrants and said the nation’s Catholic bishops are committed to being a voice for immigrants in discussions with the Trump administration.

“We will make your voice heard and work hard to see that a just and merciful solution for our broken immigration system is found that honors the dignity of the human person and keeps families together,” the archbishop told an appreciative congregation.

“His words of support to our community at this time made me feel full of grace,” said Cleotilde Batista of Ascension Parish in Portland. “This gives us hope.”

Brenda Boyzo Vera, a member of St Luke Parish in Woodburn, said the archbishop’s message was powerful at this moment. “I feel a sense of hope after what he said to us today,” Boyzo Vera told the Catholic Sentinel, Portland’s archdiocesan newspaper.

“After the recent presidential election where our community felt the racism, we come together today and the cathedral opened the doors to us and gave us a sense that we belong there, too,” said Deacon Jose Gonzalez of St. Anne Parish in Gresham.

Many Oregon parishes have been holding meetings to soothe immigrant members and strategize about ways to assist them. Portland’s mayor-elect, Ted Wheeler, said the city will not cooperate with any new federal immigration actions that may emerge from the Trump administration.

In Alaska, Anchorage Archbishop Paul D. Etienne said in a reflection he sees Our Lady of Guadalupe as the “patroness of the new evangelization.”

“On the feast of Our Lady of Guadalupe, we ask for the grace to be ‘with God’s people’ in such a way as to credibly carry the faith into the culture of our time,” he said. “On this day we are also called to pray for the many refugees of our day, the migrants and immigrants who long for a place to call home.

“May we provide the same compassion and tenderness to those in need that Our Lady of Guadalupe showed to (St.) Juan Diego and the many people of faith who confide in her,” he added.

Across the country in the Archdiocese of Washington, Hispanic and Anglo Catholics participated in a Guadalupe procession Dec. 10. Groups walked from two churches and then joined together for a Mass at the Basilica of the National Shrine of the Immaculate Conception.

In his homily, delivered in Spanish, Washington Auxiliary Bishop Mario E. Dorsonville acknowledged the concern that many people gathered for the procession were feeling, saying that it is a difficult moment in our nation’s history for the immigrant community. But he reminded the thousands gathered that Jesus is always with them and his mother is always close by.

On Dec. 1, the U.S. Conference of Catholic Bishops called on dioceses across the country to focus on migrants and refugees in prayer services and Masses they planned to honor Our Lady of Guadalupe, the patroness of the Americas, whose feast day is Dec. 12.

The day of prayer was intended “to be a time to place before a merciful God the hopes, fears and needs of all those families who have come to the United States seeking a better life.”

In the Diocese of Brooklyn, New York, a Mass on the feast day was celebrated at the Co-Cathedral of St. Joseph in Prospect Heights.

Our Lady of Guadalupe’s apparition “came at a time when Mexican natives were being persecuted by the conquistadors. Unfortunately, we still witness persecution in our times, with many still facing racial division,” Brooklyn Bishop Nicholas DiMarzio said in a statement in advance of Mary’s feast day. “By celebrating Our Lady of Guadalupe we bring the light of Christ into our communities and share the faith that unites us all.”

Bishop DiMarzio was the main celebrant of the Mass, with Brooklyn Auxiliary Bishops James Massa and Octavio Cisneros as concelebrants. Afterward, the diocese held its “Light of Christ” pilgrimage. The bishops blessed and lit the torches of Massgoers from 36 participating parishes throughout Brooklyn and Queens. The pilgrims carried the torches back to their parish churches as a sign of hope and love.

In Indiana, at the University of Notre Dame, Holy Cross Father John I. Jenkins, president, invited all members of the university community and the public at large “to pray for immigrants, refugees and their families in our nation and throughout the world.” A special Mass was celebrated at the university’s Basilica of the Sacred Heart.

“Notre Dame throughout its history has served immigrants to our nation, and we are proud to continue to do so. Let us pray in a special way for the immigrants and their families who are part of the Notre Dame family,” he said in a Dec. 11 statement.

The Chicago Archdiocese’s 11th annual “posada” pilgrimage for immigration reform Dec. 16 was to take place with a renewed emphasis on the current situation faced by immigrants in the U.S. The one-mile journey encourages members of the Chicago community to walk and pray in solidarity with immigrants who are seeking shelter, just as Mary and Joseph sought a place to stay, known as “posada.”

“We will continue to walk with all who, given our broken immigration system, live in the shadows. We will advocate for them as well as refugees seeking a better life for their families,” said Chicago Cardinal Blase J. Cupich. “The U.S. Catholic bishops and the Archdiocese of Chicago are saying loudly and clearly to all immigrants and refugees: ‘We stand with you!'”

“I always look forward to this celebration of our love for our Blessed Mother. This year is a time when things are changing in our country and people are uncertain and feel afraid,” he said. “But we know that Our Lady of Guadalupe is with, and that she will protect our families and guide us. She always has and she always will.”

Rios is editor of El Centinela, the monthly Spanish-language newspaper of the Portland Archdiocese.

PREVIOUS: After a year of setbacks, uncertainty looms for immigrants in 2017

NEXT: Catholic college dedicates sacred space as place for all faiths to pray