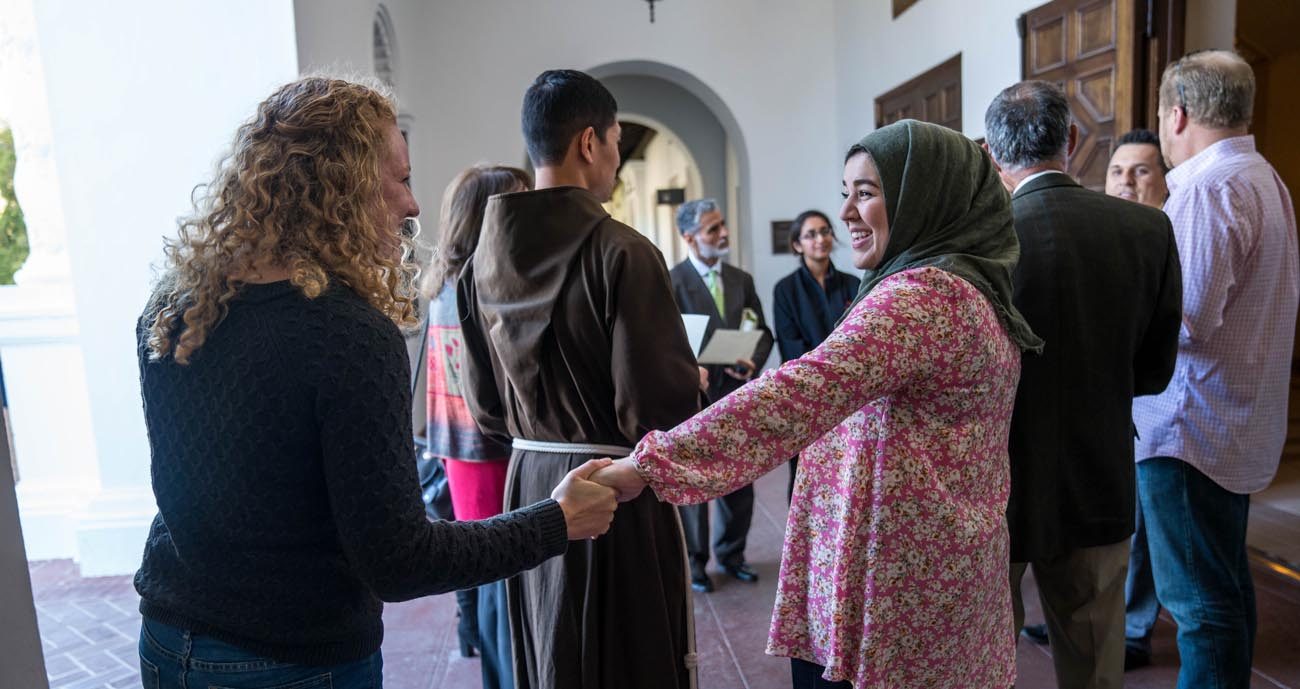 Kate Arenchild, a Lasallian peer minister for fair trade at St. Mary's College in Moraga, Calif., and Roshun Rahimi, a student involved in the college's Mission and Ministry Center, greet each other in early November. They attended the dedication of the college's Interfaith Sacred Space. (CNS photo/Gerry Serrano, courtesy St. Mary's College)

MORAGA, Calif. (CNS) — The small space has served over the years as the pastor’s office, a reconciliation room and the office of an Episcopal parish-without-walls whose members worship on the St. Mary’s College of California campus in Moraga.

Now it has a new purpose as the Interfaith Sacred Space. It provides a place of prayer for students, faculty and staff members who might have otherwise sought out the rare, vacant classroom for prayer at the Catholic college.

The college’s Office of Mission and Ministry shepherded the project with input from students. The cozy space, dedicated this fall, can be entered through the back of St. Mary’s Chapel or through a door on the arcade facing the front of the campus.

It is simply furnished, with a small chest to hold texts; a basket, which, on a recent visit, held three prayer rugs; and another rug and pillows that soften the space. The lighting is low. A digital clock in the corner displays the times Muslims are called to prayer; the clock is a gift from a faculty family. A small water fountain provides a backdrop. It’s a tranquil spot on a bustling campus.

The room is intentionally minimalist, said Karin McClellan, director of the Office of Mission and Ministry, to make it welcoming and appropriate for various faith traditions.

While the enrollment at the 153-year-old St. Mary’s College once might have been close to 100 percent Catholic, today’s student body defines itself as more diverse in religious beliefs and practices. At the dedication of the Interfaith Sacred Space, for example, blessings were offered by representatives of seven faith traditions.

It’s just the sort of space that student Roshun Rahimi has been seeking during her years at St. Mary’s.

Rahimi came to St. Mary’s as a transfer student two years ago. “I wear a head scarf,” she said. “You stick out like a sore thumb.” It led her to question whether St. Mary’s was the right environment for her.

“My first year I came close to dropping out,” she told The Catholic Voice, newspaper of the Diocese of Oakland. “I stayed because I was past the deadline to get a refund. I figured I would come on campus, go to class and leave.”

As a transfer student, she had missed out on some of the traditions that connect first-year students.

A flight to Washington to respond to a family emergency had been particularly difficult for Rahimi, her aunt and young cousins. They had been subjected to several searches.

She came back to school at a low point, she said, as she questioned why she had to “jump around from empty classroom to empty classroom” to pray as her faith requires.

In her email, she found an invitation from Christian Brother Charles Hilken, a St. Mary’s history professor. In it he expressed support for “our Muslim brothers and sisters” in the wake of the shootings in San Bernardino and invited them to dinner.

“I was skeptical,” Rahimi said. She told her mother about the event, and received encouragement to attend.

Rahimi was sitting with Michael McAlpin, interim assistant vice provost and director of media relations, who asked her if there was one thing she had an issue with on campus.

“It’s challenging to pray on campus,” she told him. “I go find a classroom but then if a class comes in, I have to go reset that prayer.”

McAlpin introduced her to McClelland, of the Office of Mission and Ministry, who was dining there with her children.

McClelland recalled the conversation, with Rahimi asking, “Where can I pray on campus?”

McClelland saw her as “exactly who I need.”

McClelland said St. Mary’s College professor Barbara McGraw had offered her office key to Muslim students seeking a place to pray. But the campus needed something bigger. It also needed to be close to the heart of the campus, McClelland said.

In addition to finding a space — which was furnished with a grant from the Bishop John S. Cummins Institute for Catholic Thought, Culture and Action — the work of the group of students, faculty and staff members is not finished.

The hope is that in addition to sacred space, there will be opportunities for people of various faith traditions to “gather around issues of social justice,” McClelland said.

Jurich is on the staff of The Catholic Voice, newspaper of the Diocese of Oakland.

PREVIOUS: ‘We stand with you and we love you,’ Portland archbishop tells immigrants