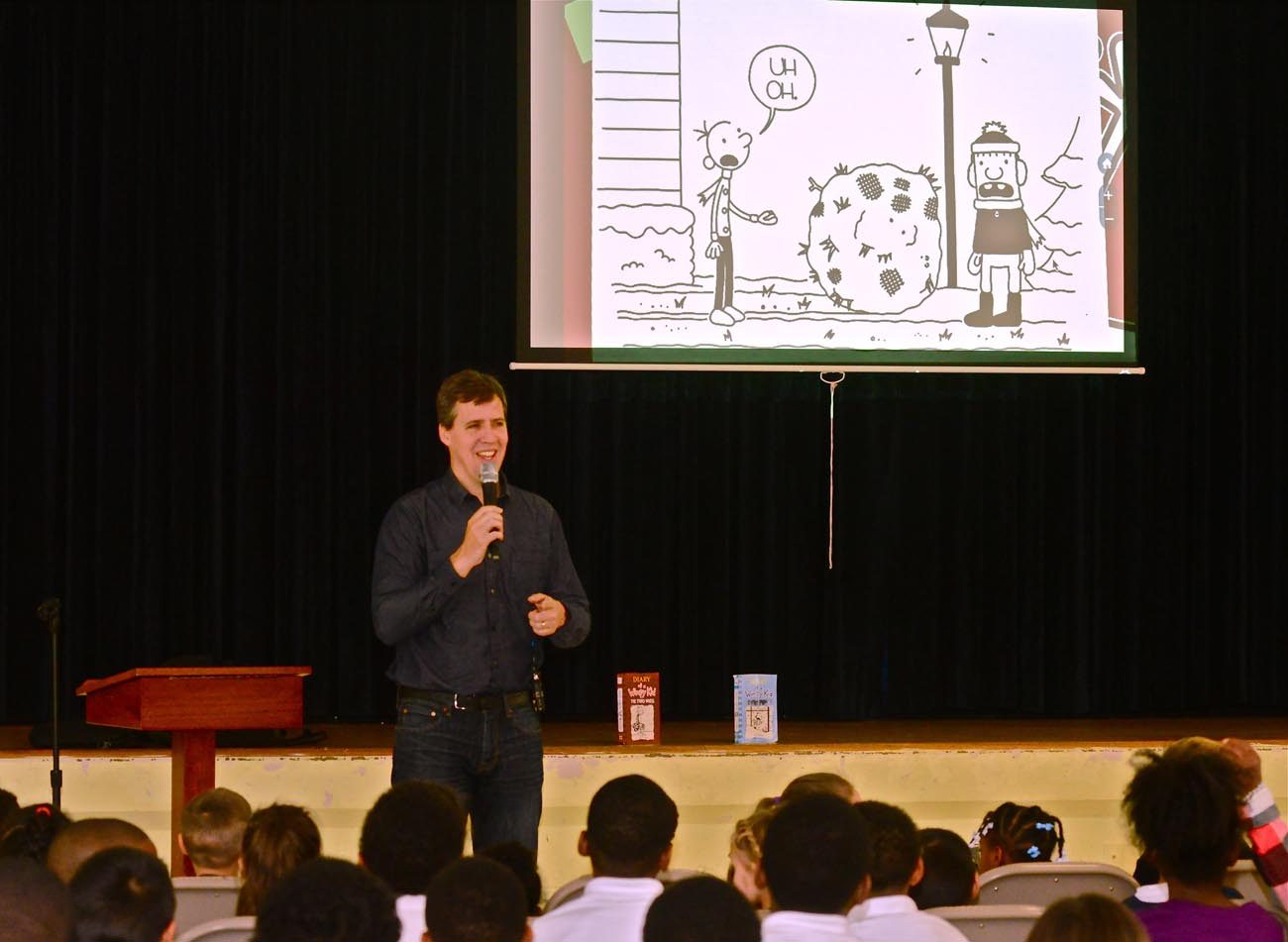 CLINTON, Md. (CNS) — Visitors to Mark Twain’s hometown of Hannibal, Missouri, can see a whitewashed fence like the one that Tom Sawyer tricked his friends into painting for him in the novel.

In Clinton, students and teachers at St. Mary’s School of Piscataway learned that their Catholic school and parish in the Archdiocese of Washington has a special connection to a modern children’s classic, “Diary of a Wimpy Kid” by Jeff Kinney. 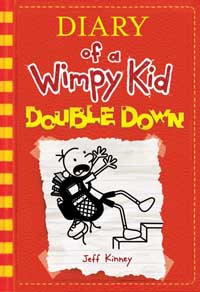 In early November, the day after his 11th and newest book in that series, “Double Down,” went on sale, the best-selling children’s book author visited St. Mary’s School and shared his memories of going to Mass and attending teen dances at the parish while he was growing up and was something of a wimpy kid himself.

“It’s so cool to be here. Believe it or not, 30 years ago I used to attend dances here,” Kinney told a school assembly of 180 prekindergarten through eighth-grade students. “I tried break dancing” here, he said, before asking kids if they knew what that dance move was.

He and his friend used to think that when people at Mass there shared the sign of peace, it sounded to them like, “peas be with you,” which made them laugh. “I got in trouble lots of times for laughing in church,” Kinney confessed.

The “Cheese Touch” refers to a famous scene in “Diary of a Wimpy Kid” and the movie series it inspired, when the main character, middle schooler Greg Heffley and his best friend, Rowley, try to avoid a mysterious piece of cheese “that has been sitting on the blacktop since last spring.” After a kid named Darren touched it with his finger, Kinney wrote, “that’s what started this thing called the Cheese Touch. It’s basically like the cooties. If you get the Cheese Touch, you’re stuck with it until you pass it on to someone else.”

The Nov. 2 visit marked a homecoming for Kinney, who said he wanted to start the world tour for his new book by coming home to Maryland.

Kinney went to Eugene Burroughs Middle School in Accokeek, and then attended Bishop McNamara High School in Forestville, where he graduated in 1989. He later earned a degree at the University of Maryland in College Park, where he was a cartoonist for the Diamondback campus newspaper and created a goofy character named “Igdoof.”

“This is where I went to church, in this hall,” he told the students at the St. Mary’s assembly. “A lot of the jokes I got for ‘Diary of a Wimpy Kid’ were from my childhood growing up. A lot of it is from here. … In my mind, the ‘Wimpy Kid’ world is this world. When I write, I think about where I grew up.”

Kinney said he got into the first and only fistfight of his life as an eighth grader, when he and his friend got into a disagreement, and the kids around them were chanting, “Fight! Fight!” a scene that later appeared in the book and movie with the two boys squaring off awkwardly, not knowing how to fight.

Then there was the time his older brother woke him up in the middle of the night and told him he had slept through the whole summer and it was time for the first day of school. Young Jeff Kinney then went downstairs at 3 a.m. and made breakfast for himself, as if it were a school day, and his father caught him and asked what he was doing.

Kinney also told the students about how he was a “terrible” member of his swim team and once hid shivering in the locker room, wrapping toilet paper around himself to warm up. All those incidents also later happened to Greg in “Diary of a Wimpy Kid.”

Kinney was inspired by comic strips such as “Calvin and Hobbes” and “The Far Side,” and he dreamed of being a cartoonist someday. “As a kid, I fell in love with the comics,” he said. His University of Maryland character Igdoof once made a surprise appearance in the panel of the comic strip Big Nate, after he had corresponded with that strip’s creator, Lincoln Peirce.

“That’s the moment I knew I had to be a cartoonist,” Kinney said.

After college, Kinney was not able to become a syndicated cartoonist, but he kept a journal of funny things that happened to him over the years. “Funny things happen every day,” he said. He converted those ideas into an online comic strip, and later a book publisher asked him to rework them as a children’s book.

“Diary of a Wimpy Kid” was published in 2007, and his books have been best-sellers since. “I feel really lucky it worked out,” said Kinney, who noted that his success came after receiving a lot of rejections from publishers.

In an interview with the Catholic Standard, Washington’s archdiocesan newspaper, Washington, Kinney — who now lives in a Massachusetts town with his wife and two sons in middle school — said that in New England, people often find community life in their towns, but when he grew up in Maryland, his Catholic parish and Catholic high school were places where he found a sense of community.

“It was a huge part of the fabric of our lives growing up,” Kinney said, noting that he had spent many hours at St. Mary’s Parish over the years, as a member of the teen club there and later as that group’s president. “It’s very meaningful for me to come back to the school.”

In the past decade, “Diary of a Wimpy Kid” books have been published in 42 languages, and a special milestone happened last year, when the Latin version was presented by the priest who translated it to a smiling Pope Francis at the Vatican.