Amid the darkness, hold fast to light of hope, pope says 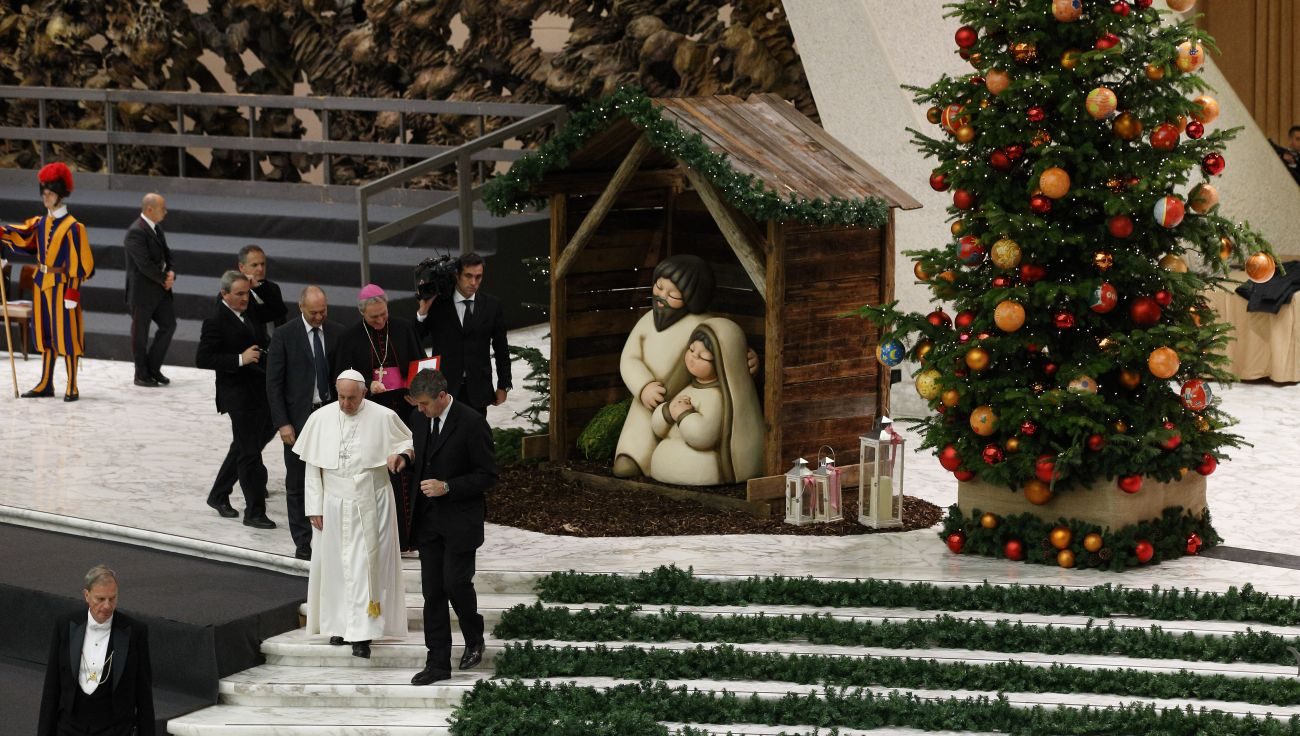 Pope Francis is assisted by his aide, Sandro Mariotti, as he walks down stairs during his general audience in Paul VI hall at the Vatican Dec. 7. The Nativity scene and Christmas tree decorations are from the Mexican state of Queretaro. (CNS photo/Paul Haring)

VATICAN CITY (CNS) — Christian hope is not the same as being optimistic about the future, but is knowing that whatever dark or frightening things are going on in one’s life, God is there offering protection and light, Pope Francis said.

Holding his general audience in the Vatican audience hall decorated with Nativity scenes and Christmas ornaments from the state of Queretaro, Mexico, Pope Francis announced Dec. 7 that he was beginning a series of audience talks about hope.

Especially during Advent and in preparation for Christmas, he urged people to read the second half of the Book of Isaiah, “the great prophet of Advent, the great messenger of hope.”

The audience began with a reading of Isaiah 40, which starts: “Comfort, give comfort to my people, says your God.”

When the prophet was writing, the pope explained, the people of Israel were in exile, they had “lost everything — their homeland, freedom, dignity and even their trust in God. They felt abandoned and without hope.”

Isaiah not only proclaims God’s love and fidelity, but calls on those who still have faith to offer consolation to others and help them “reopen their hearts to faith.”

The desert — literally and figuratively — “is a difficult place to live, but it is precisely the place where one can walk to return not only to one’s homeland, but to God, return to hoping and smiling,” the pope said. “When we are in darkness and difficulty, it’s hard to smile.

“Hope teaches us to smile,” the pope said. “One of the first things that happens to people who withdraw from God is that they are people without smiles. They might be able to laugh out loud — tell one joke after another and laugh — but their smile is missing.”

“When we are with a baby, a smile comes spontaneously because a baby is hope,” he said. “We smile even if it’s a bad day because we see hope.”

The key players in the Christmas story, he said, prove that “history is not made by the powerful, but by God together with his little ones, those small and simple people whom we find around Jesus, who is about to be born: Zachariah and Elizabeth, who are old and marked by sterility; Mary, the young virgin engaged to Joseph; the shepherds, who were despised and counted for nothing.”

They had hope, the pope said, and they turned the dark and twisted paths of life around them into “a highway on which to walk toward the glory of the Lord.”

“There’s no denying that there is a crisis of faith in the world today,” he said. “People say, ‘I believe in God. I’m Christian.’ ‘I belong to that faith.’ But their lives are far from being Christian, far from God! Religion, faith has turned into an expression.”

Those who believe must convert, constantly turning their hearts to God and “following that path toward him. He awaits us.”

NEXT: Catholic church bombed as fighting intensifies in northern Myanmar