Christmas reminds us of hope for the future, pope says 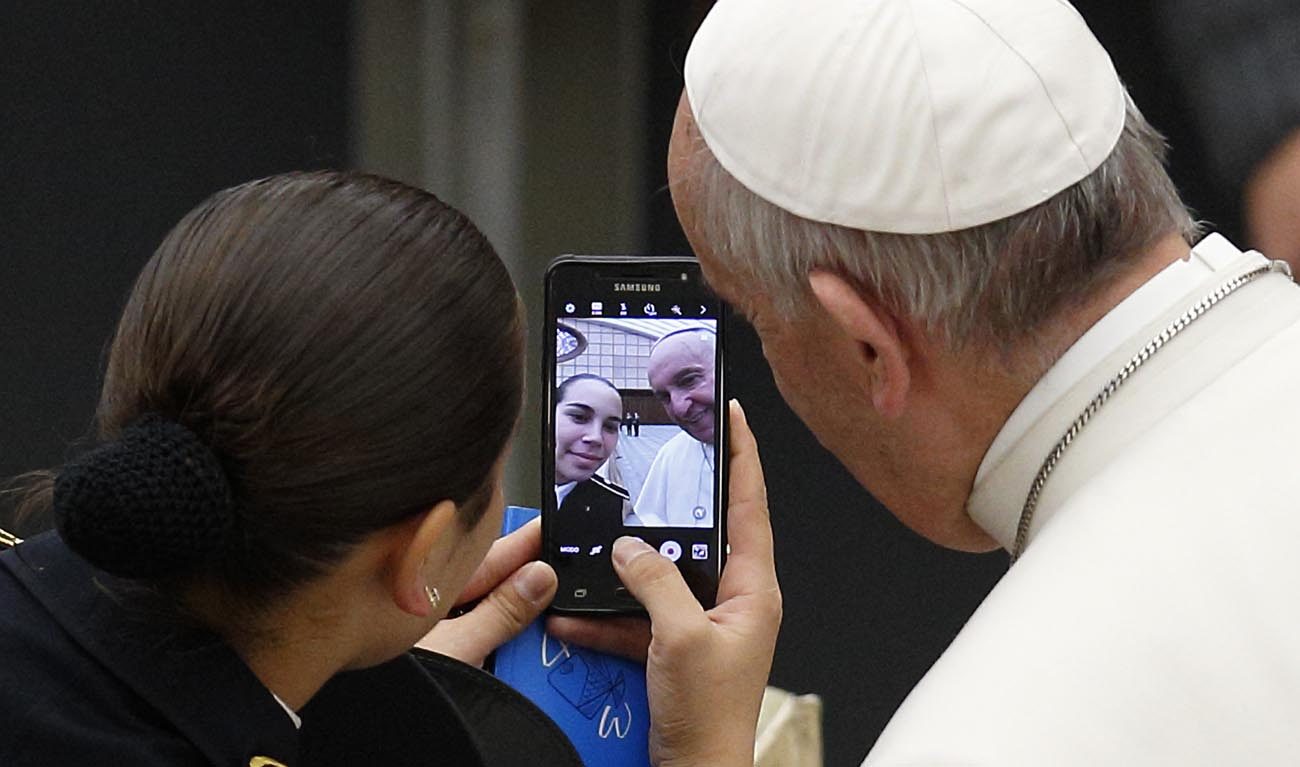 Pope Francis poses for a selfie with an Argentine police officer from the province of Entre Rios during his general audience in Paul VI hall at the Vatican Dec. 21. (CNS photo/Paul Haring)

VATICAN CITY (CNS) — The birth of Christ is a reminder for Christians to take a moment and reflect on the hope of salvation given by God to the world, Pope Francis said.

Those who are humble and poor like the shepherds come to realize the promise of hope that comes from trusting God and not from “their own securities, especially material goods,” the pope said Dec. 21 during his weekly general audience.

“Remember this: Our own securities will not save us. The only security that saves us is the hope in God which saves us, which is strong. It makes us walk through life with joy, with a desire to do good, with a desire to become happy for all eternity,” the pope said.

Upon entering the Paul VI audience hall, the pope greeted people and received gifts and letters from well-wishers.

Approaching a crying child, the pope wiped her tears and did his best to calm her. After succeeding in consoling her, he then pointed to his cheek, which the toddler leaned toward and kissed.

Continuing his series of talks on Christian hope, the pope reflected on the birth of Jesus as the “source of hope” for the world.

God, he said, “does not abandon his people, he is near to them to the point of stripping himself of his divinity.”

Hope, the pope continued, is never stagnant and the simplicity of the Nativity creche found in Christian households “transmits hope. Each character is immersed in this atmosphere of hope.”

The pope explained that each image found in the Nativity scene represents an aspect of this hope, such as the city of Bethlehem which, despite it not being a capital city, was the place chosen by divine providence, which “loves to act through the small and the humble.”

The figures of Joseph and Mary, who both believed in the words of the angel, can be seen gazing at the child they were told by God to name Jesus, the pope said.

“In that name there is hope for every man and woman because through that son of a woman, God will save humanity from sin and death,” he said.

The image of the shepherds, he continued, represents the humble and the poor who witness the long-awaited promise of hope and salvation while the angels singing at the birth of Christ represent the “praise and thanksgiving to God” expressed in Christian life.

“In these days, by contemplating the creche, we prepare ourselves for the Nativity of the Lord. It will truly be a feast if we receive Jesus, the seed of hope that God sows within the furrows of our personal history,” Pope Francis said.