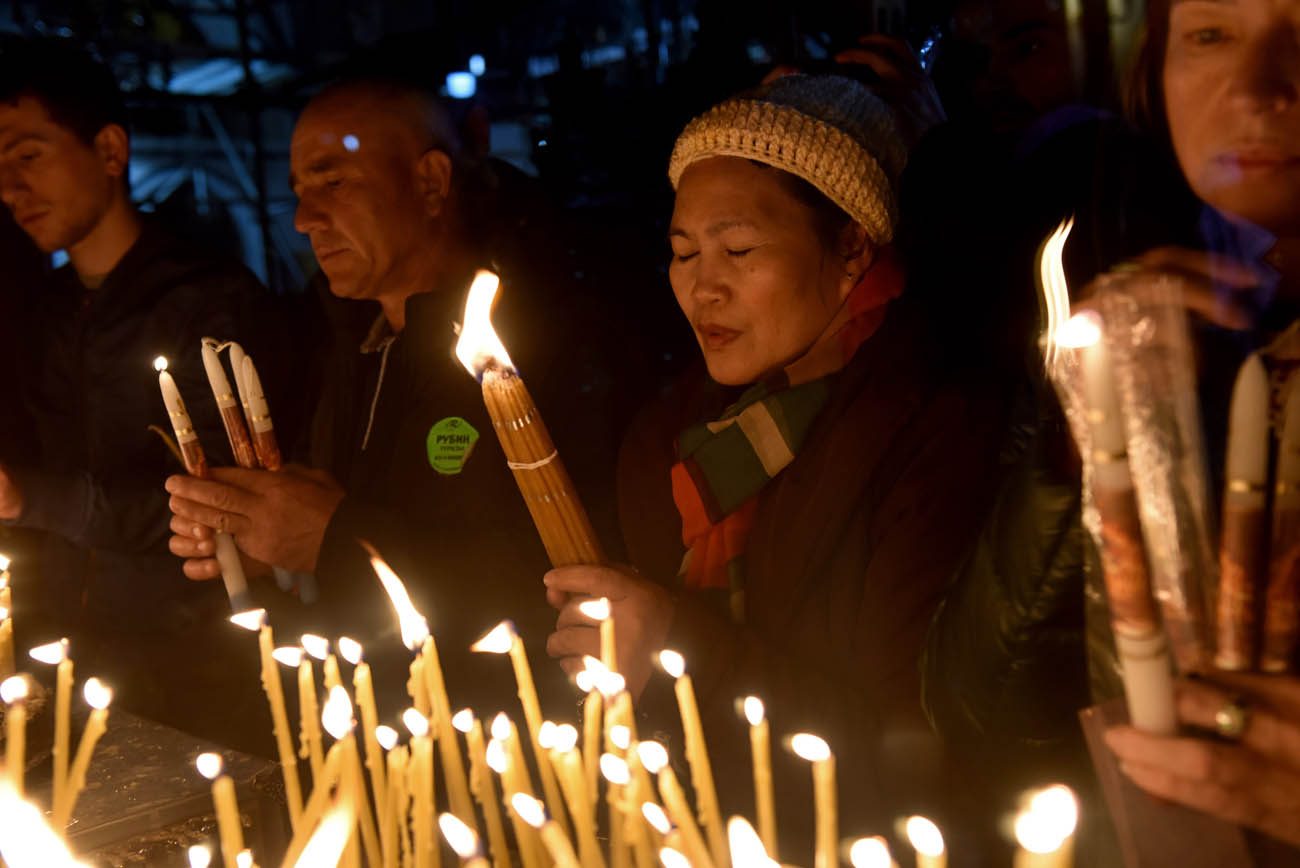 Pilgrims light candles Dec. 17 in the grotto of the Church of Nativity in Bethlehem, West Bank. (CNS photo/Debbie Hill)

JERUSALEM (CNS) — Except for specific incidents in Egypt and one in Libya, Christians in the Middle East are suffering the same fate as their fellow citizens, Archbishop Pierbattista Pizzaballa, apostolic administrator of the Latin Patriarchate of Jerusalem, told media in response to a journalist’s question at his first Christmas news conference.

Nevertheless, Christians have remained strong in their witness to their faith, Archbishop Pizzaballa added.

The archbishop, appointed in June, released his first Christmas message, followed by the news conference, Dec. 19. In his message, he said Advent and Christmas are times to “prepare for God’s surprises” and to remember the “incredible gift” with which God surprised humanity.

“We need God’s surprises. With these surprises God opens up the horizon and brings the novelty that can change our world and our lives,” Archbishop Pizzaballa said.

He also blamed the Mideast violence on the arms trade, power interests and “relentless fundamentalism.”

“The situation of Christians in Syria, Iraq and Egypt is a complete tragedy. In these countries, (the) cradle of our civilization, the vicious cycle of violence which is at work seems hopeless and endless,” he said in the message. “Wars and the way of force have not been able to bring peace and justice; it only brought more violence, death and destruction.”

He told journalists at the news conference: “The images of Aleppo we see in front of our eyes are shocking. …Those who are suffering the price of this abnormal tragedy are the people.”

While the Holy Land is not facing such an extreme situation as in the rest of the region, Christians have still had to confront several cases of vandalism of church property, the construction of the Israeli separation barrier in the Cremisan Valley on property belonging to dozens of Christian families and unresolved budgetary issues regarding Christian schools, said Archbishop Pizzaballa.

In response to a journalist’s question, Archbishop Pizzaballa noted that the tiny Christian community in Gaza, numbering 1,000 people, is also facing the same difficulties all Gazans face living inside the enclave as “one big prison.” In addition to the political and military role they play in Gaza, Hamas is also an Islamic religious movement, and its fundamentalist religious pressure is felt strongly by the Christian community, he said.

He also noted that, in Jordan, the patriarchate has welcomed thousands of refugees: With a population of 7 million, the country has taken in 3 million refugees, he said. In addition, in Israel the patriarchate has also taken on the responsibility of administering to some of the needs of a smaller refugee community.

Commenting on a Dec. 18 terrorist attack in the Jordanian city of Karak, where a police standoff with gunmen at a Crusader castle left 10 people dead, including a Canadian tourist, Archbishop Pizzaballa said he hopes this was an isolated incident and that he is “confident authorities in Jordan are doing their best to isolate all ideological movements.”

On Dec. 20, Archbishop Maroun Laham, Latin patriarchal vicar in Jordan, announced the cancellation of all Christmas celebrations in solidarity with the Jordanian families of those killed in the Karak attack. Prayers will be held in various churches for those killed and their families, for a healing of the wounded, and for “maintaining a Jordan with its leadership and people impregnable to extremism, terrorism and madness,” the archbishop said in a statement.

In his message, Archbishop Pizzaballa said throughout the region, the church and Christian charities have a presence, and one concrete way Christians can help is to financially support these groups in their work, adding that there do not seem to be any serious political attempts to resolve the conflicts.

“The circumstances are not always easy, and we know … we have to talk of justice and mercy, but sometimes in front of these tragedies it seems like slogans, and people are tired of slogans with no change,” he added.

The archbishop also said education is essential to combating all cases of extremism.

“We have our part of responsibility in those devastating tragedies: We cannot continue to only speak about dialogue, justice and peace. Words are not enough. We must combat poverty and injustice, and give a continual testimony of mercy to reveal to the world the love and tenderness of our God,” he said in his message.

Despite all of the tragedies, Christians must have hope, he said in the message.

“This hope is the light that is continually guiding us among the darkness and confusion of this region and of the whole world. Our broken hearts should be ready for surprises. And Christmas is actually the time to renew our faith in the God of surprises as we go to Bethlehem to venerate an apparently powerless God: The child Jesus,” Archbishop Pizzaballa said. “In our prayers, we are and we will continually carry this wounded world.”

PREVIOUS: Christmas reminds us of hope for the future, pope says

NEXT: Best gift this Christmas is God giving the world his son, Jesus