Faith and diplomacy: Hackett reflects on role as U.S. envoy to Vatican 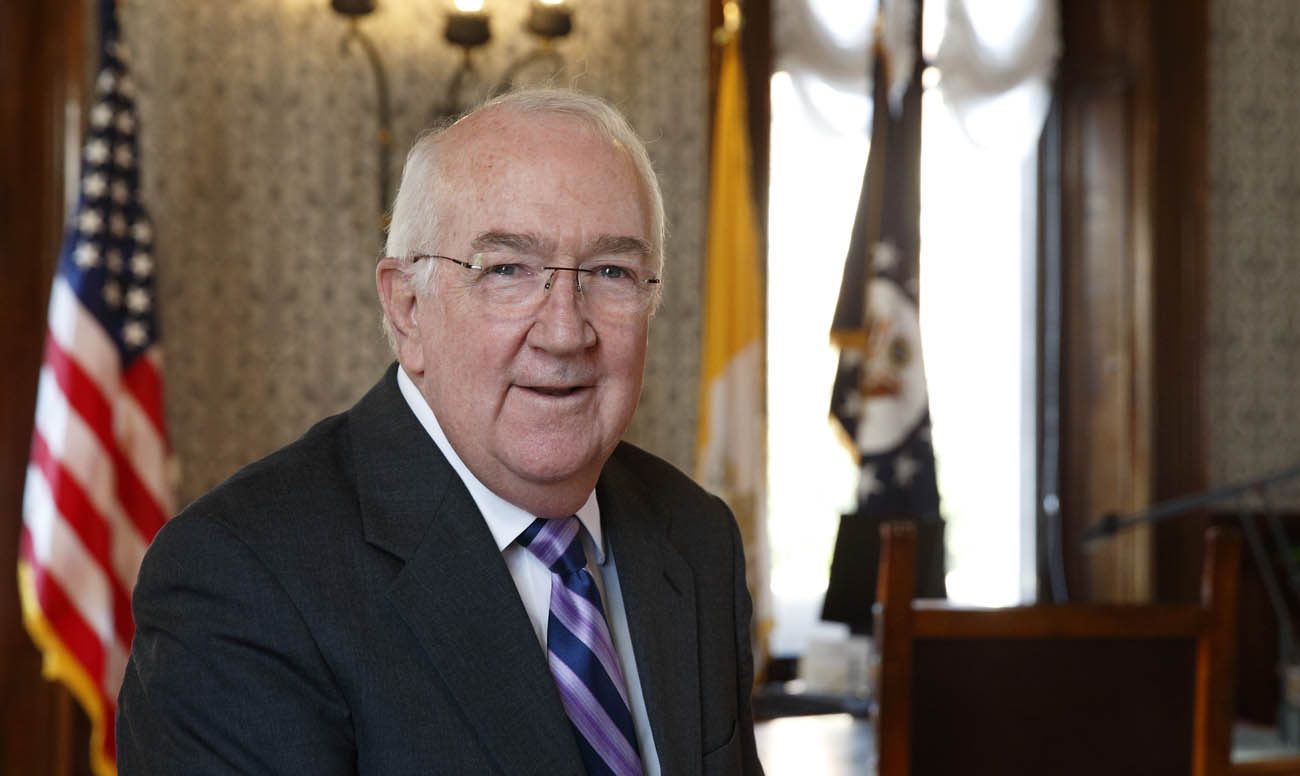 Ken Hackett, U.S. ambassador to the Holy See, is pictured in his office at the embassy in Rome Dec. 15. Hackett's last day as ambassador will be Jan. 20, when U.S. President-elect Donald J. Trump takes office. (CNS photo/Paul Haring)

VATICAN CITY (CNS) — Ken Hackett, the U.S. ambassador to the Holy See, is gearing up to try retirement for the second time. The retired president of Catholic Relief Services, the U.S. bishops’ overseas aid agency, is leaving his ambassadorial post three years and three months after presenting his credentials to Pope Francis.

For diplomats from around the world, the Vatican is known as a prime “listening post,” and what Hackett is listening to a lot these days are questions about what President-elect Donald Trump has in store.

In an interview Dec. 15, Hackett said, “There is a general concern among everybody in the world — whether you were for Trump or against Trump — because it’s a surprise every day” with his announcements, appointments, meetings and even his Tweets as he assembles his cabinet and prepares for inauguration.

Among other diplomats as well as within the Holy See, he said, “they just don’t know that to expect” as far as what President Trump’s positions, policies and actions will be on issues as varied as Palestine, human rights and immigration — just three of the issues of deep concern to the Vatican and the worldwide Catholic Church.

The 69-year-old ambassador will leave Rome Jan. 20 — Inauguration Day. He has no idea when Trump will nominate a new ambassador, but even after Trump identifies someone, it will take several months for the security vetting and approval by the Senate. In the meantime, the United States will be represented at the Vatican by a charge d’affaires, Louis L. Bono.

Looking back on his three years as ambassador, Hackett has no problem coming up with three highlights. First, without a doubt, the visit of Pope Francis to the United States in September 2015. The other top moments were the visit of President Barack Obama to the Vatican in March 2014 and the canonization this year of St. Teresa of Kolkata, whom Hackett knew well.

Before Pope Francis’ trip, he said, “there was a long, long lead in where we had to prepare, work, encourage, offer insight, cautions — and you never really know if they are going to be heeded, accepted or inculcated into the visit.”

The ambassador said he had been nervous about how Pope Francis would be received by Congress and how his speech would go over, but the pope “captured their hearts and I think it had an impact across the nation and maybe across the world,” especially the way the pope held up four iconic U.S. citizens as relevant models of virtue for Americans today: Abraham Lincoln, the Rev. Martin Luther King Jr., Dorothy Day and Thomas Merton.

The pope’s personality, his rhetoric and his use of the four “icons” allowed everyone to grasp his call for “compassion and engagement” with each other across partisan lines and with the wider world to work for the common good, Hackett said.

In almost 20 years as president of CRS, Hackett worked with church leaders at every level — including many at the Vatican — but he said as ambassador he was surprised by how little Curia offices share information with each other and by how hard people at the Vatican work. For example, he said, the monsignor who serves as the desk officer for U.S. affairs in the Vatican Secretariat of State, also has responsibility for Canada, Mexico, the Dominican Republic and Haiti. “That’s a big portfolio.”

The Vatican staff is “very bright, very intelligent and very committed. They want to make a change for the good,” he said. “Pope Francis has inspired so many people in the Vatican,” and even if some people seem more interested in hearing about who is not onboard, “the vast majority are saying, ‘This is great.’ His leadership offers them the opportunities to do what they joined to do.”

The U.S. ambassador’s job is varied, as well, he said. War and peace, human rights, human trafficking, interstate relations, climate change and nuclear nonproliferation were all on the Vatican’s agenda.

Hackett represented the Obama Administration, which meant collaborating with the Vatican on issues such as the defense of Christians in the Middle East and climate change, he said, but it also involved listening to top Vatican officials who echoed the U.S. bishops’ criticisms of the contraceptive mandate in the Affordable Care Act and Obama’s support for same-sex marriage.

The Catholic Church is “a big tent,” Hackett said. “There are a lot of people with different viewpoints under that tent; there are scoundrels and saints.”

Personally, serving as ambassador was a “time of growing faith,” he said, adding with a laugh that it was not just because he received three plenary indulgences after attending the ceremonies for the opening of three Holy Doors in Rome for the Year of Mercy.

“You see some miraculous things” being the Vatican ambassador, he said. “You read about some horrible things. But the miraculous always overcomes the horrible.”

NEXT: Philippine bishops oppose death penalty, but many Filipinos back Duterte