Philippine bishops oppose death penalty, but many Filipinos back Duterte 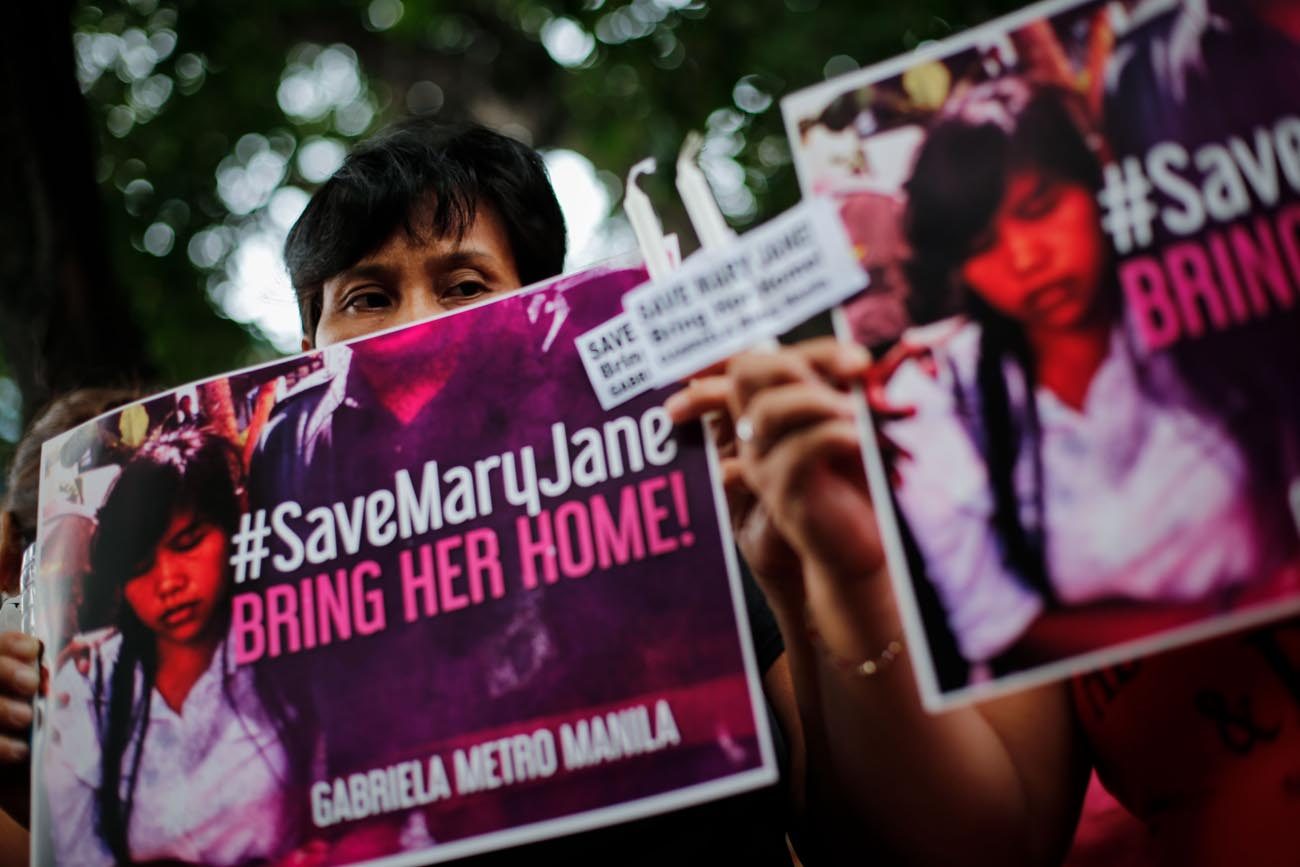 Women's advocates hold banners during a gathering in late September against the execution of death row inmate Mary Jane Veloso in Manila, Philippines. Catholic bishops in the Philippines are speaking out against the imminent reintroduction of the death penalty, but many citizens in the predominantly Catholic country have rallied around the tough-on-crime approach of President Rodrigo Duterte.(CNS photo/Mark R. Crisino, EPA)

TOKYO (CNS) — Catholic bishops in the Philippines are speaking out against the imminent reintroduction of the death penalty, but many citizens in the predominantly Catholic country have rallied around the tough-on-crime approach of President Rodrigo Duterte.

The Philippine House of Representatives will vote by the end of this year on reinstating capital punishment, a sentence one opposition lawmaker has called “the worst Christmas gift” for the Philippine people. One archbishop dubbed the move a lazy dodge instead of helping offenders.

Amid his war on drugs, Duterte has presented the death penalty as an essential deterrent to crime. He has strong support in this from lawmakers.

Jose Manuel Diokno, who heads the law school at De La Salle University in Manila, said he thinks members of the House of Representatives who support reimposing the death penalty are “simply pandering to the Duterte administration and trying to curry political favor with the president.”

Diokno said while there have been no recent polls to provide figures, support for the move from citizens likely stems from those who are fed up with the Philippines’ weak justice system. Critics allege routine shoddy work by police investigators and note that prosecutors bring only one in five cases to trial.

In 1987, the Philippines became the first Asian nation to abolish the death penalty. It reinstated the punishment from 1993 to 2006, but critics say convictions were rife with errors and were applied overwhelmingly against the poor. A case in 2004 revealed a 71 percent wrongful conviction rate by lower courts.

As the nation races toward reinstatement, Catholic bishops are speaking up.

“Cleanse the police ranks! Fix all the courts!” Archbishop Socrates Villegas of Lingayen-Dagupan, president of the Catholic Bishops’ Conference of the Philippines, told a prayer rally in San Carlos City Dec. 12. “(The) death penalty is a lazy form of penalty instead of helping reform those who made mistakes.”

Cardinal Luis Antonio Tagle of Manila told worshippers Dec. 11 that God does not give up on sinners, and neither should the Philippine people.

“Every life has hope,” he said. “There is hope for transformation.”

A prayer against the death penalty read in Manila parishes Dec. 10-11 spoke of “a cry for vengeance” disguised as a call for justice, reported Reuters, the British news agency.

In a nation where at least 80 percent of people are Catholic, the Catholic Bishops’ Conference of the Philippines is urging unity among clergy.

“Let us make a more forceful stand against the death penalty,” Rodolfo Diamante, the bishops’ prisons commissioner, said in mid-December. “Now more than ever, we need to act fast and swiftly to counteract the prevailing culture of death in our society.”

But some observers say to reach a full audience, the bishops must not appear to be anti-Duterte.

“Many Filipinos do not like it when priests use the pulpit to talk about politics,” said Jayeel Serrano Cornelio, director of the development studies program at Ateneo de Manila University.

Cornelio notes that in 2012, the Philippines introduced universal access to contraception, a measure 71 percent of adult Catholics supported, but which the church opposed.

Nevertheless, Cornelio said, the church can be an effective counterpoint to an authoritarian state.

“Many people, for example, are looking for clarity from Catholic leaders when it comes to the war on drugs, and now the death penalty,” he said. “The crucial consideration for them is expressing it in a way that speaks to a wide audience and without being readily seen as anti-Duterte. That would be a mistake, certainly during these days when Duterte still enjoys high popularity ratings.”

Duterte won the presidential election this year pledging to drive down crime. He has claimed that in his previous role as mayor of Davao City, he personally executed crime suspects to show police officers that he supported a no-questions approach. Around 5,000 drugs suspects have died in street killings nationwide since July, when he became president.

The Catechism of the Catholic Church allows for the death penalty if it is “the only possible way of effectively defending human lives against the unjust aggressor.” Pope Francis has called for a global abolition of the death penalty and asserted that “a life sentence is just a death penalty in disguise.”

Advocates of the death penalty bill are strongly dismissive of the church’s position. House of Representatives Speaker Pantaleon Alvarez, a co-author of the law, mocked the bishops’ approach.

“All Asian countries have it; we are the only one foolish to not have it. Most of the countries that have no death penalty are the countries in Europe,” he said “That’s their culture; don’t impose it on us.”

PREVIOUS: Faith and diplomacy: Hackett reflects on role as U.S. envoy to Vatican

NEXT: Put aside ideology and work to rebuild Aleppo, say Catholic leaders