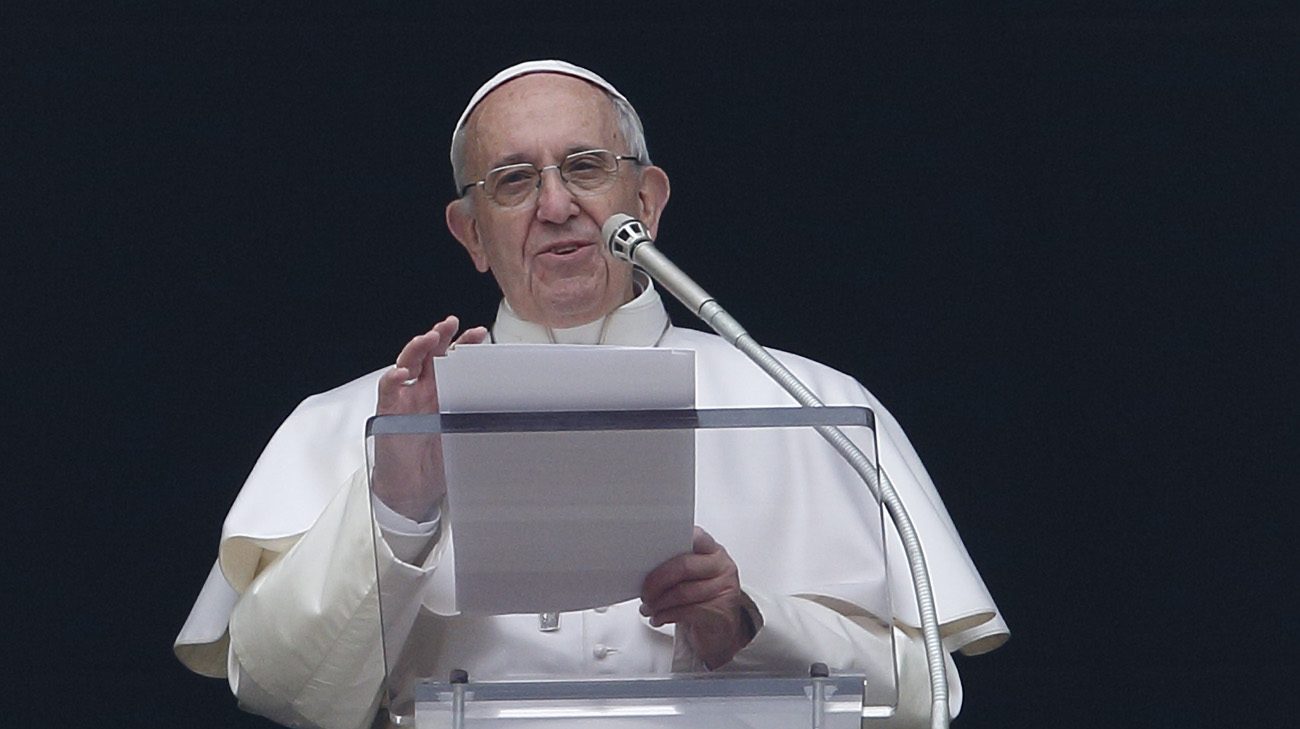 Pope Francis speaks as he leads the Angelus from the window of his apartment overlooking St. Peter's Square at the Vatican in this Dec. 11, 2016, file photo. (CNS photo/Paul Haring)

VATICAN CITY (CNS) — Clerics who are self-righteous and over-intellectualize religion can end up hurting and ostracizing sinners who do repent, Pope Francis said at his morning Mass.

Such priests uphold their own rules and “erase the law made by the Lord,” who told Abraham to “walk in my presence and be blameless,” the pope said Dec. 13 during the Mass in the chapel of the Domus Sanctae Marthae, where he lives. It was the 47th anniversary of the pope’s ordination as a priest.

The pope focused his homily on the day’s reading from the Gospel of Matthew (21:28-32) in which Jesus asks the chief priests and elders which of two sons did his father’s will: the one who refused to work in the vineyard, but then changed his mind and did, or the son who said he would work, but did not.

Jesus warned the chief priests and elders that they were repeating the second son’s mistake of being unfaithful and that, like the first son, “tax collectors and prostitutes” were following the Lord and, therefore, entering God’s kingdom first.

The men Jesus is talking about, the pope said, had “juridical, moral and religious authority” and “decided everything,” including to kill Lazarus because Jesus had raised him from the dead, and to make a deal with Judas to betray Jesus.

These chief priests and elders demonstrated “bullying and tyranny toward the people” by exploiting the law, he said. They used their intelligence to regulate everything, but they had forgotten God’s law to Abraham, the Ten Commandments given to Moses and the way of the Lord.

“They were always stuck in their own convictions and they were not blameless,” he said.

Their victims, the pope said, were “the humble and poor people who trusted in the Lord.”

With “vanity, pride, arrogance,” they treated those who had failed to follow the law, but later repented, with “injustice” making them feel “condemned,” “abused” and “rejected,” the pope said.

Judas, for example, “was a traitor. He sinned badly,” but he regretted what he had done and returned the money to the chief priests and elders who had given it to him. However, the men did not protect or forgive him, but scoffed, turned their backs and told him to fend for himself, he said.

“Because they forgot what a pastor was,” the pope said. “They were intellectuals of religion, those who had power, who carried out catechizing the people with a morality made from their intelligence and not from the revelation of God.”

Even today, the pope said, there is this “spirit of clericalism” in those priests who “feel superior and distance themselves from the people,” who don’t have time to listen to the poor, the suffering, prisoners and the ill.

Jesus never played the same “game” as the elders, he said; instead he went to the sick and the sinners, which was seen as “scandalous.”

“Even today,” he said, “Jesus says to all of us and also to those who are seduced by clericalism, ‘sinners and prostitutes will enter the kingdom of God before you.'”

PREVIOUS: Marriage advice: Make time for each other, especially at Christmas