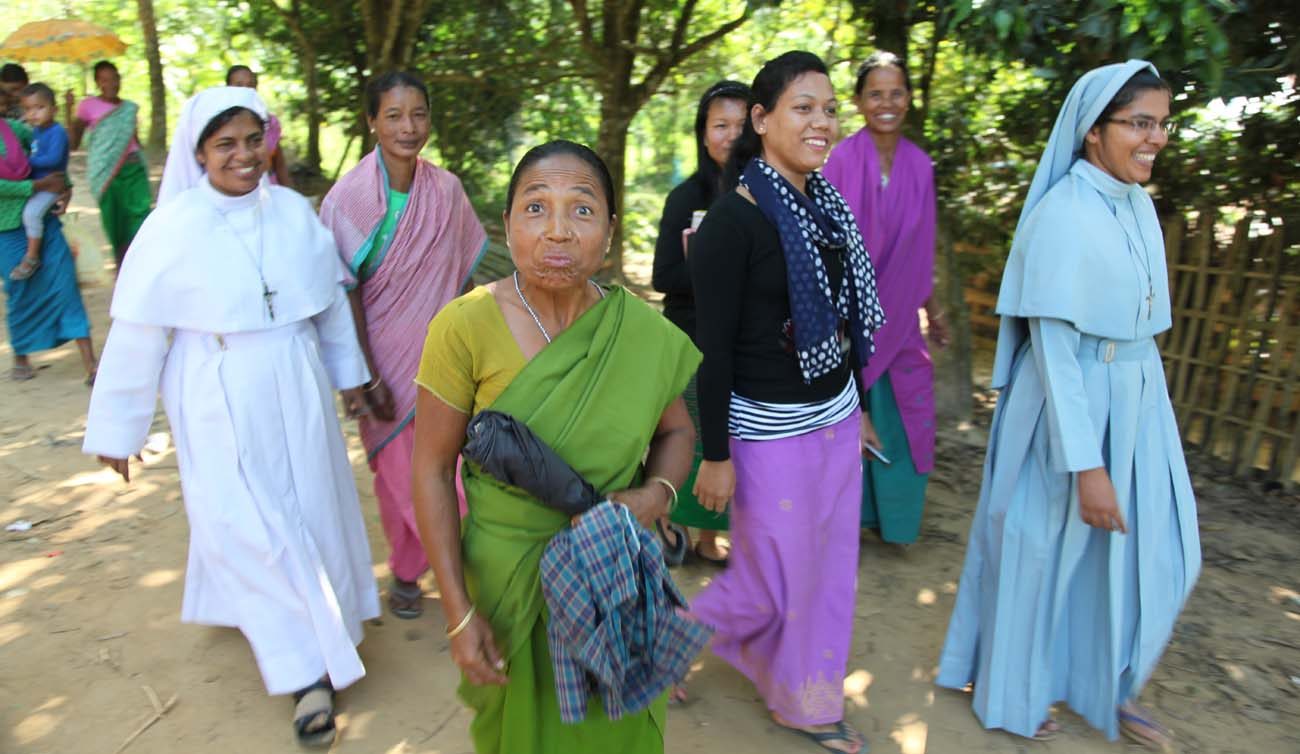 Sisters and tribal women walk in a small village in northeast India in late November. Members of two Eastern Catholic churches are taking people on a journey of faith simply by living with them. (CNS photo/John E. Kozar, CNEWA)

WASHINGTON (CNS) — In remote northeastern India, where Christianity is largely unknown, members of two Eastern Catholic churches are taking people on a journey of faith simply by living with them.

Priests, nuns and laypeople are living in mud-and-dung huts among tribal Indians, “reaching the unreached,” said Msgr. John E. Kozar, president of the Catholic Near East Welfare Association, which supports Eastern churches in India and other areas.

Msgr. Kozar spoke to Catholic News Service after returning from a recent trip to northeastern India. He described remote areas of jungle, forest, rolling hills and tea estates, where it is not unusual for people to have family members trampled to death by elephants.

Syro-Malabar and Syro-Malankara Catholics are “doing some wonderful evangelization work there” in a delicate situation, he said.

Msgr. Kozar asked not to specify the towns he visited. Although the Indian government says it accepts all religions, hardline Hindu nationalists have attacked Christians when they thought they were trying to convert people.

India’s most-Catholic state is Kerala, but Msgr. Kozar said the Eastern Catholics he visited are “breaking the Kerala model of building, building, building … it’s living with the people; letting them come to know Jesus” by getting to know the missionaries who live with them.

“The sisters and the priests — the greatest witness that happens is they live” in the same conditions as the tribal people, inviting them “to get to know them, to get to know how they pray.”

He said there is no presumption that anything will happen, but there is an attitude of “we’re here, showing who we are.”

In these situations, people “draw closer to Jesus,” he told CNS. They are learning stories about the faith.

“This plays out in such a wholesome, beautiful way. … You’re taking people who had no affiliation … (but) they have this yearning to relate to a higher power,” he said, noting that some people who live with these missionaries are now preparing for baptism.

The tribal languages are initially a barrier, Msgr. Kozar said. “There aren’t even textbooks to learn these languages.”

He noted that at one stop on his Nov. 20-Dec. 2 visit, he spoke in English, and translations included Bengali, Malayalam and the local language.

Religious are making portions of the Bible available in local languages and are beginning to train catechists, he said. This is especially challenging because many villages have no school, or people can only attend school for about five years, so they would not even have a middle-school education.

Despite all these obstacles, the missionaries are “trying to bring good news of Jesus where he has never been known.”

The churches “have to resist the temptation to build institutions,” he said. “This is about giving witness by living with the people.”

The Syro-Malabar Catholic Church traces its roots to St. Thomas the Apostle. The Syro-Malankara Church was formerly a faction of the Jacobite Church, an Orthodox group in India, but reunited with the Holy See in 1930. Both are among 22 Eastern Catholic churches that originated in Eastern Europe, Asia or Africa. India also has a Latin-rite Catholic Church.

NEXT: Open your heart to that small splendor born in Bethlehem, pope says