Open your heart to that small splendor born in Bethlehem, pope says 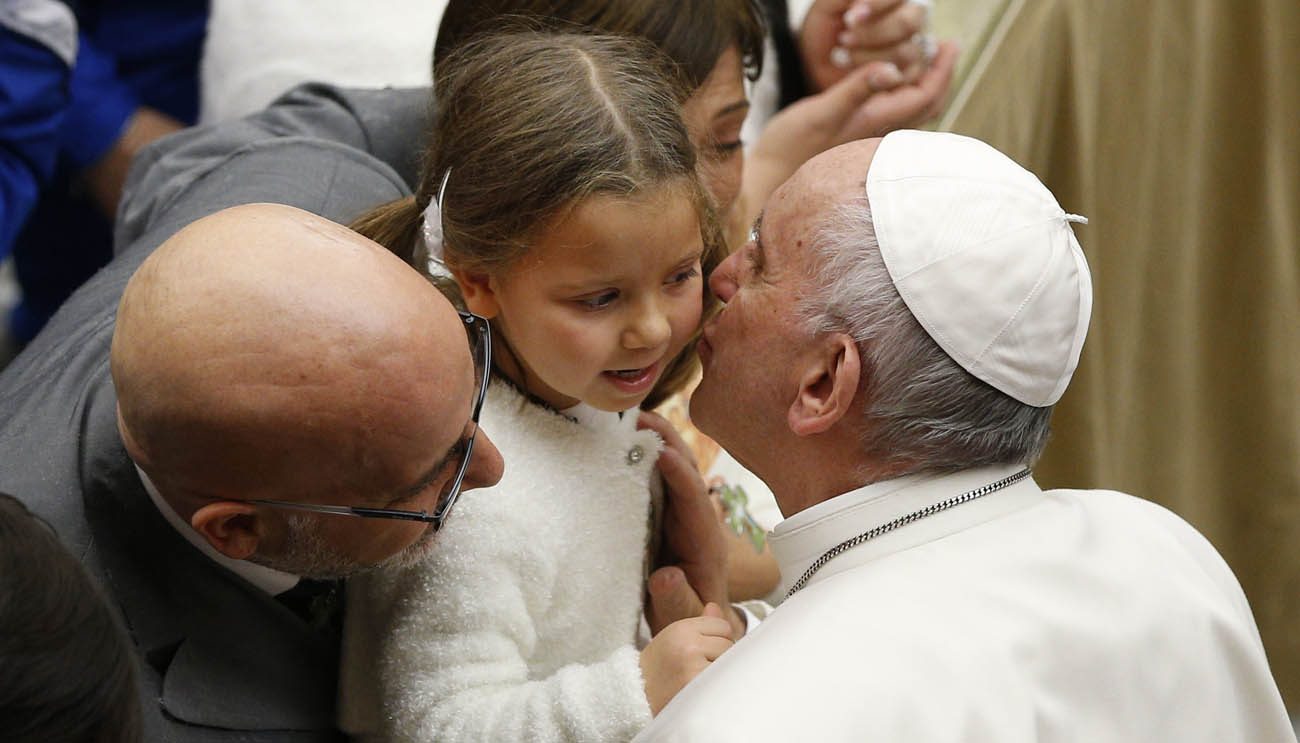 VATICAN CITY (CNS) — Christmas is a time to open your heart to the little and wondrous things found in baby Jesus — born poor and defenseless so he could be near and bring hope to everyone, Pope Francis said.

With a Nativity scene decorating the stage in the Vatican audience hall, the pope’s weekly meeting with visitors and pilgrims was festive with a group of “zampognari,” Italian bagpipe players, who played traditional songs and carols.

People also sang and wished the pope a happy birthday, in anticipation of him turning 80 on Dec. 17. Before the audience, two women presented him with a small chocolate cake with two candles lit on top, which he eventually blew out with some prompting.

“I thank all of you for these good wishes for my birthday,” he later told those gathered in the hall.

However, he said with a smile and a warning that he was just poking fun, in his native Argentina wishing people happy birthday before the actual day brings bad luck and anyone offering greetings prematurely “is a jinx.”

Preparing for Christmas with Advent is a time to be open to “the surprise of a God-child, a poor God, a weak God, a God who abandoned his greatness in order to be close to each one of us,” he said in his main audience talk.

God “knelt” and lowered himself before humanity to offer his mercy “and free man from that which disfigures the beautiful image of God in him. Because when we are in (a state of) sin, God’s image is disfigured” within us.

God never abandons his people, the pope said. God is always faithful and “his grace is greater than sin.”

“We need to learn this because we’re a bit pig-headed and we don’t get this,” he said.

Looking at his audience, the pope asked people to answer the question, “Who is greater: God or sin?”

“Hmm, you don’t sound convinced,” he said in reaction to the hushed and scattered replies.

“Who is victorious in the end, God or sin?” and “Is God able to conquer the biggest,” most shameful, most terrible sin in the world? he asked, followed by people shouting aloud their answers.

“This question isn’t easy,” he said, suggesting any theologians in the audience might want to speak up and answer it.

“With what weapon does God conquer sin?” he asked as people responded: “Love!”

Knowing God is victorious over all evil, that he can break down all obstacles with his grace and forgiveness and that he has come to save everyone is the reason for Christian hope, he said. In fact, “it’s awful when we find a Christian who has lost hope,” thinking “it’s over,” and there is nothing on the horizon.

“Evil will not triumph forever, there is always an end to suffering. Desperation is conquered because God is among us” born in a manger in Bethlehem, he said.

“Christmas is a day for opening the heart, it’s necessary to open the heart to the many small things in that baby and the many splendors that are there,” he said.

“In the defenseless strength of that baby,” people can see “the final victory over the arrogant and noisy powers of the earth,” he said in one of his summarized greetings to various language groups.

NEXT: Brazilian Cardinal Arns, 95, remembered for his fight for human rights