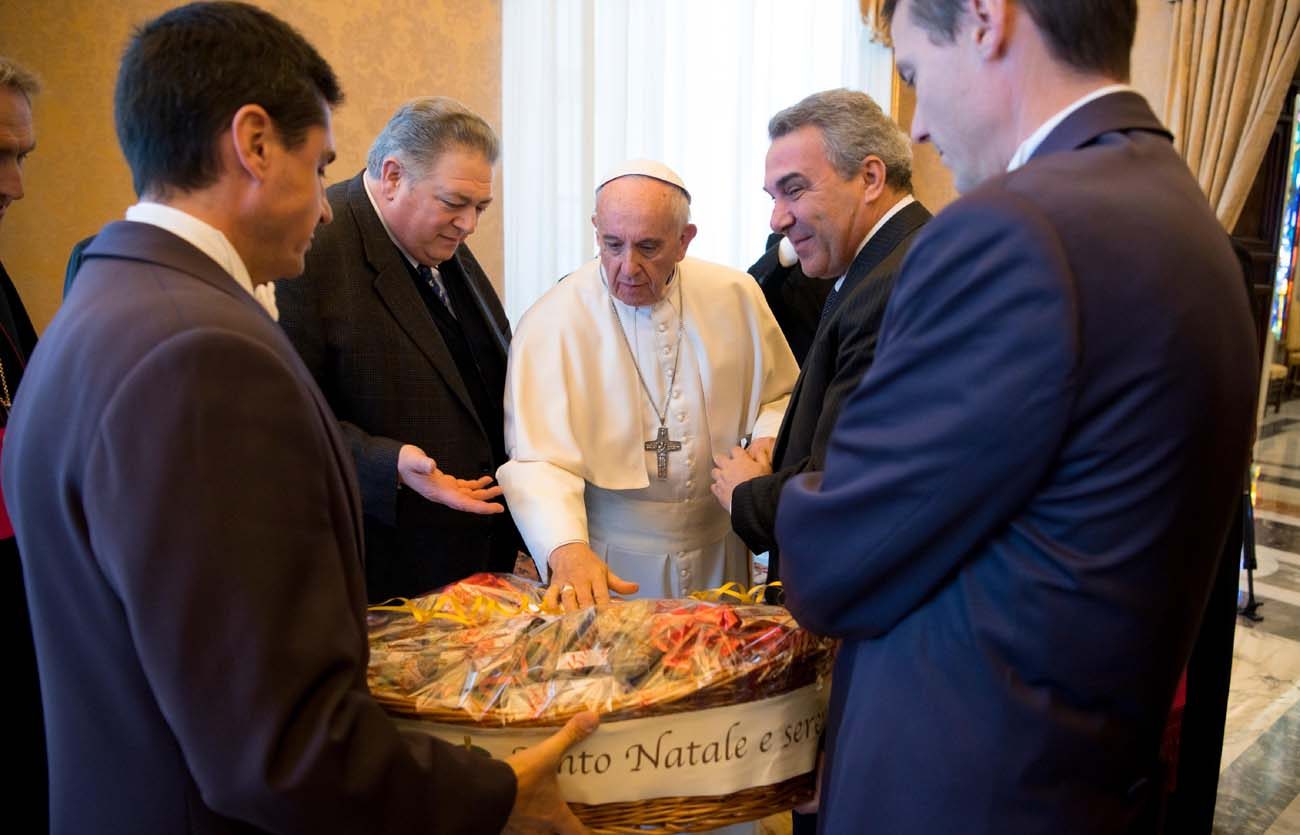 Pope Francis accepts a gift from members of the International Catholic Rural Association during a meeting at the Vatican Dec. 10. (CNS photo/L'Osservatore Romano, handout)

VATICAN CITY (CNS) — Acknowledging the uncertainty faced by many farmers, Pope Francis encouraged members of the International Catholic Rural Association to maintain as much as possible their traditional rhythms of work, family life and respect for the environment.

“In your efforts to work the land and to ensure its fruitfulness year in and year out, you also encounter difficulties resulting from climate change, a reality which is unfortunately aggravated by human neglect,” the pope told association members Dec. 10.

Family farmers, he said, live the biblical ideal of working the land and making it produce sustenance while respecting creation and preserving it for future generations.

Departing from his prepared text, Pope Francis told the group about a farmer he knew who cultivated olive trees. “When he told me how he worked, I tell you I could see tenderness. He had that relationship with nature. He pruned his trees like he was their father, with tenderness. May you never lose this relationship with nature and with the Creator. This gives us all dignity.”

Pope Francis especially asked the Catholic farmers for “an extra dose of humanity” in wisely using and ensuring access to technology.

“In your training projects,” he told the members, “you are rightly critical of models of agribusiness,” which seek profit even at the expense of excessive waste and threats to the environment through the use of biotechnologies that can “eliminate the variety of species and the richness of biodiversity.”

While agriculture is an essential activity and in many parts of the world remains the best response to poverty, it has become the victim of speculation and a focus on profits beyond all else, the pope said.

Such an attitude, he said, comes at “the expense of sacrificing the rhythms of agricultural life with its times of work and leisure, its weekly rest and its concern for the family.”

“Solidarity itself, frequently invoked as a remedy, is insufficient unless it is accompanied by justice in the allotment of land, in agricultural salaries and in access to markets,” the pope said.

The purpose of the International Catholic Rural Association is to support people in “acting as Christians in the concrete circumstances of agricultural life, where the importance of the human person, the family and community, and a sense of solidarity represent essential values, even in situations of significant underdevelopment and poverty.”