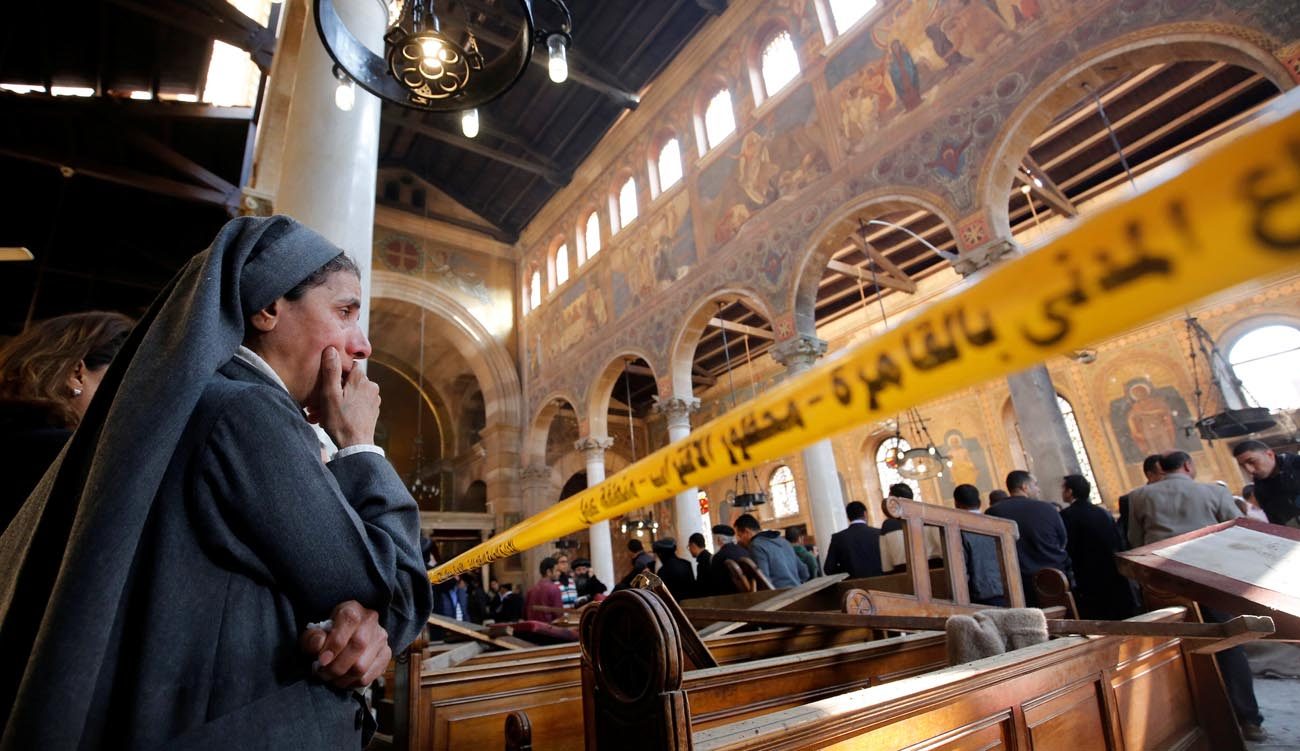 A nun cries as she stands inside St. Mark's Coptic Orthodox Cathedral Dec. 11 after an explosion inside the cathedral complex in Cairo. A bomb ripped through the complex, killing at least 25 people and wounding dozens, mostly women and children. (CNS photo/Amr Abdallah Dalsh, Reuters)

“We are united in the blood of our martyrs,” the pope told the Orthodox patriarch, according to a Vatican statement.

The patriarch thanked Pope Francis for his closeness at such a sad time and asked his continued prayers for the Copts and for peace in Egypt, the statement said.

On a December weekend bloodied by terrorist attacks in Egypt and Turkey, Pope Francis condemned the violence and urged people to hold fast to their faith and renew their commitment to upholding basic human values.

After reciting the Angelus Dec. 11, Pope Francis offered prayers for the “victims of savage terrorist attacks” in Egypt, which also wounded dozens, and Dec. 10 in Istanbul, which killed close to 40 people, mainly police.

“The places are different, but the violence is the same,” Pope Francis said. In response to the “death and destruction,” there is only one response: “faith in God and unity in human and civil values.”

The pope also told the crowd in St. Peter’s Square that each day in prayer he is close to the people of the besieged city of Aleppo, Syria.

“We must not forget that Aleppo is a city and that there are people there: families, children, elderly, sick,” he said. “Unfortunately we have become used to the war and destruction, but we must not forget that Syria is a country full of history, culture and faith. We cannot allow this to be negated by war, which is a pile of abuse and falsity.” 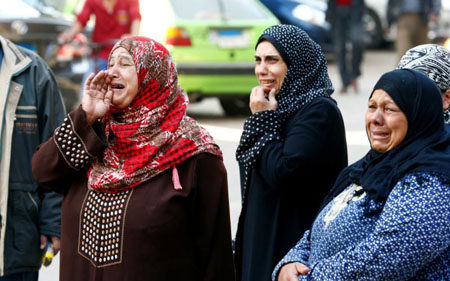 Around the world, Christians reacted to the bombing at St. Mark’s Coptic Orthodox Cathedral complex with messages of condolences.

In Washington, Cardinal Daniel N. DiNardo of Galveston-Houston, president of the U.S. Conference of Catholic Bishops, noted that St. Mark himself was no stranger to the persecution of Christians.

“Those who gathered to worship the Lord at his cathedral this morning in Cairo are family to us,” he said in a Dec. 11 statement. “We draw near to our Coptic brothers and sisters in prayer, sorrow and comfort. And we are confident in the healing power of our Lord Jesus Christ. The lives lost strengthen the faith of Christians everywhere and offer a testament to the great privilege of worshiping God in peace.

He, too, referred to attacks in other countries.

“This weekend has witnessed the darkness of violence reach into many places, including Turkey, Somalia and the church building collapse in Nigeria. But the light still shines! Today let us offer a special prayer for all those facing persecution,” he said.

“Our heart is with Patriarch Tawadros II … and our brother church, and we wish for goodness in Egypt, and call on the heads of state to quickly bring those responsible to justice,” said official spokesman of Egypt’s Catholics, Father Rafic Greiche.

Father Greiche called the attack “a cowardly, terrorist act on a house of God,” adding that “the church in our country is suffering due to the murder and spilling of blood of innocents.”

His statements appeared on Church of Alexandria, an official website of Egypt’s Coptic Catholic Church, which accounts for a tiny percentage of the country’s larger Coptic Orthodox minority.

On the same site, Coptic Catholic Bishop Butros Fahim Awad Hanna also condemned the attack and addressed those behind it.

“We tell the terrorist that no matter what you do, Christians will remain steadfast in their faith and in adherence to their country, Egypt” said Bishop Fahim, whose province of Minya is a traditional Christian stronghold in the predominantly Muslim North African nation.

“I thought it was Judgment Day,” said 59-year-old Magdi Ramzi, who was in the back of the church at the time of the explosion.

“It was the loudest noise I have ever heard,” he told the Egyptian TV program “90 Minutes.”

The bomb, which reportedly detonated in the women-only section of the church, killed his wife, and gravely wounded his granddaughter who was fighting for her life in a Cairo hospital, Ramzi said.

In an address at the Dec. 12 funeral for victims of the attack, Egyptian President Abdel-Fattah El-Sisi called for three days of mourning.

He said a 22-year-old suicide bomber was behind the attack. The president also said four people, including one woman, had been arrested, for alleged involvement the attack, and that two more people were being sought.

In Jerusalem, Wadie Abunassar, director of the Media Committee of the Assembly of Catholic Ordinaries of the Holy Land, called the attacks “barbaric.”

“I was contacting my Turkish friends to express my solidarity with them after (Saturday night’s) attack when I got the news about the explosion inside the church (Sunday morning.) Surely those who are responsible for such barbaric attacks do not know who God is and what his messages are,” he said.

“We are not afraid, but this is something barbaric and inhuman, to do an attack against people who just love the church and God and who came to worship on Sunday,” he said.

Contributing to this story were Judith Sudilovsky in Jerusalem and James Martone in Washington.