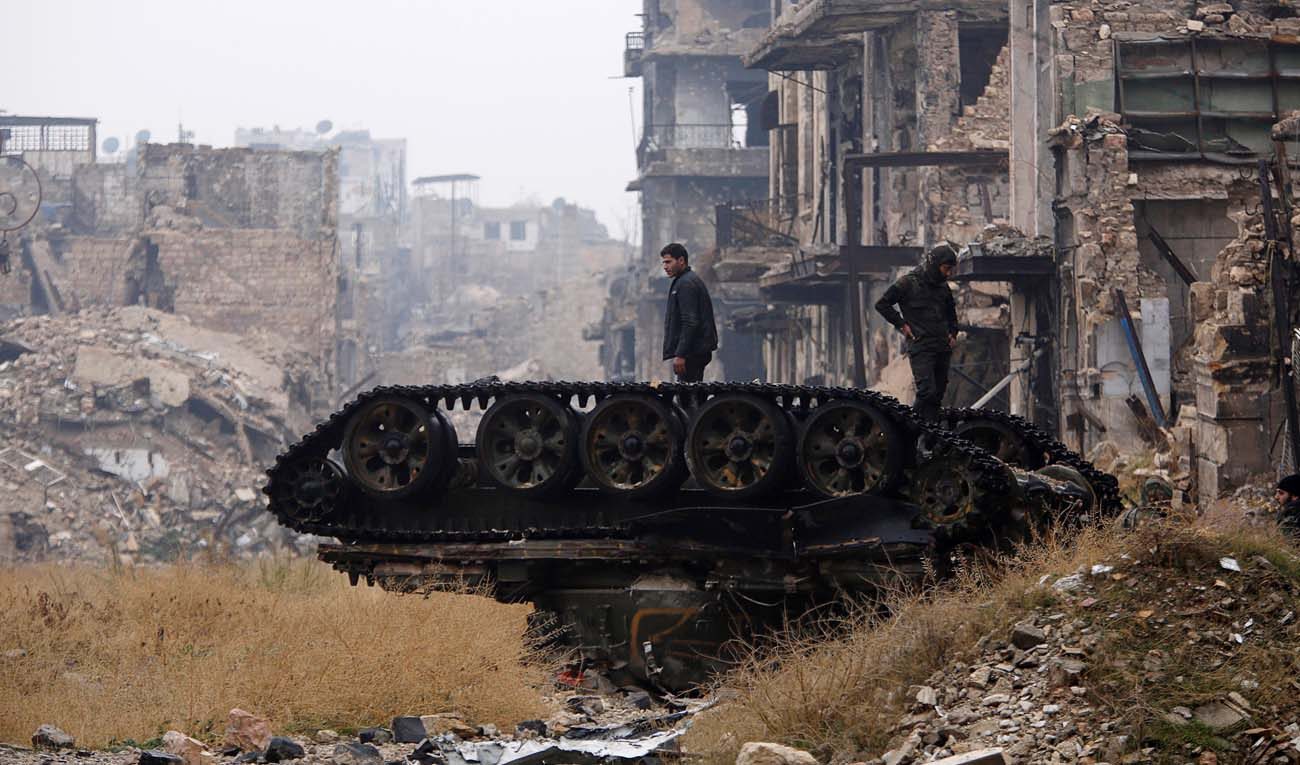 Forces loyal to Syrian President Bashar Assad stand atop a damaged tank Dec. 13 in the destroyed government-controlled area of Aleppo. Rejecting violence as a way to solve problems is not a sign of weakness, but rather requires courage and honesty, Pope Francis told diplomats. (CNS photo/Omar Sanadiki, Reuters)

VATICAN CITY (CNS) — Rejecting violence as a way to solve problems is not a sign of weakness, but rather requires courage and honesty, Pope Francis told diplomats.

The path of nonviolence in politics and society “is the path to pursue now and in the future,” he said.

“This is the way of peace,” he added. And “not a peace proclaimed by words but in fact denied by pursuing strategies of domination, backed up by scandalous outlays for arms, while so many people lack the very necessities of life.”

The pope’s comments came Dec. 15 in a speech to six new ambassadors to the Vatican who were presenting their letters of credential to the pope. The ambassadors represented the nations of Sweden, Fiji, Moldova, Mauritius, Tunisia and Burundi.

Speaking to the group of diplomats, the pope dedicated his talk to nonviolence as a “style of politics for peace” — the subject of his message for the World Day of Peace, Jan. 1.

In a world marked by war, conflict and widespread violence even in people’s day-to-day life, “the choice of nonviolence as a style of life is increasingly demanded in the exercise of responsibility at every level, from family education, to social and civil commitment, to political activity and international relations,” he said.

“In every situation, this means rejecting violence as a method for resolving conflicts and dealing with them instead through dialogue and negotiation.”

Those who hold public office, he said, are particularly called to “cultivate a nonviolent style” in how they think and carry out their duties.

“This is not the same as weakness or passivity; rather it presupposes firmness, courage and the ability to face issues and conflicts with intellectual honesty, truly seeking the common good over and above all partisan interest, be it ideological, economic or political,” Pope Francis said.

Despite so many wars and “genocides of unheard-of proportions” the past century, he said, there have still been “outstanding examples of how nonviolence, embraced with conviction and practiced consistently, can yield significant results, also on the social and political plane.”

Some peoples and nations have achieved their dreams of freedom and justice peacefully thanks to the nonviolent efforts of their leaders — a path that needs to be pursued starting now and for always, he said.