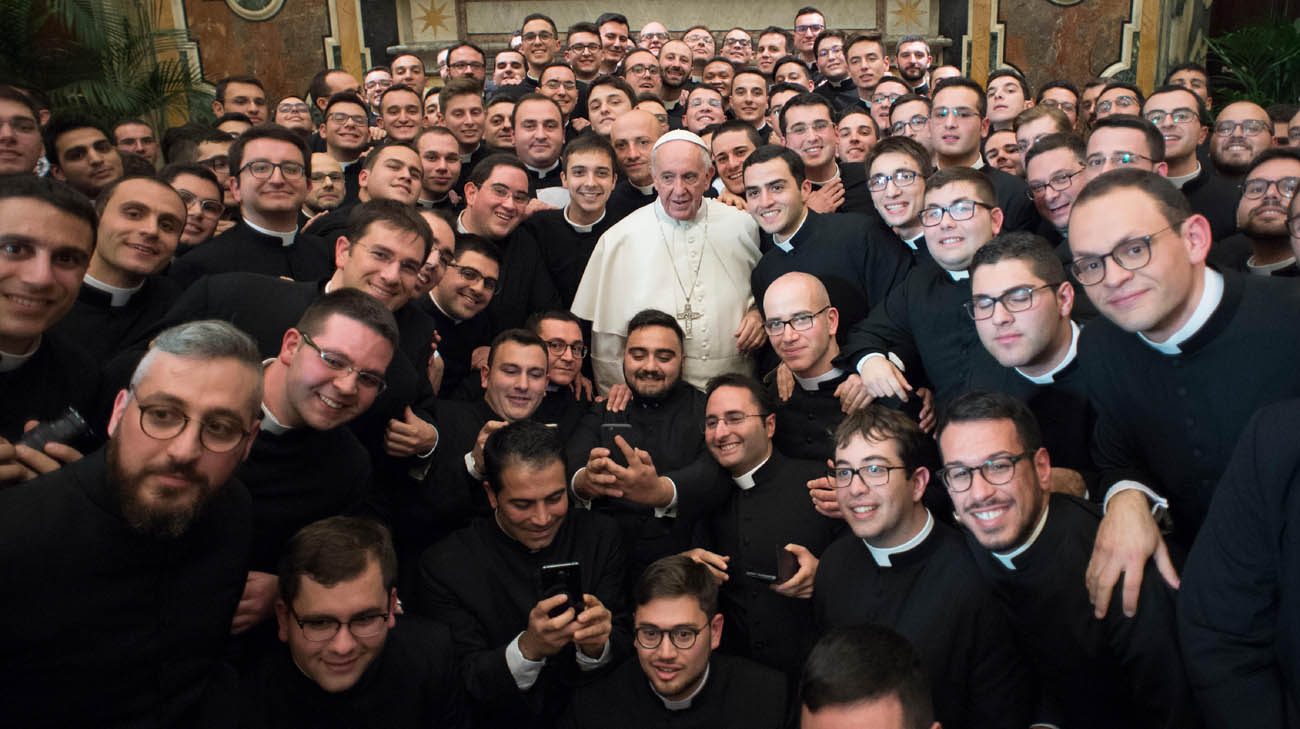 Pope Francis poses with seminarians from Pius XI Seminary during a meeting at the Vatican Dec. 10. The seminary trains priests for the Puglia region of southern Italy. (CNS photo/L'Osservatore Romano)

VATICAN CITY (CNS) — The prayer, community life and pastoral experience offered to seminarians must help them become priests with a strong sense of belonging to the Lord, to the church and to God’s kingdom, Pope Francis said.

“The first obstacle to overcome, then, is narcissism. It’s the most dangerous temptation,” the pope said in a written message to about 180 students from Puglia’s regional Pius XI Seminary.

“How can I notice Christ if I only look at myself?” he asked. “How can I experience the beauty of the church if my only concern is to save myself, my energy and get out of every situation unscathed?”

Belonging to Christ and his church, the pope wrote, means being able to enter into relationships, especially with people who are not the most popular. It is something young men must learn and practice in the seminary, first with other seminarians and then with the people they meet in their pastoral experiences in parishes.

A key part of that, he said, is for the seminarians to form and maintain friendships with other people their age outside the seminary and to never “think you are better than other young people” just because one has felt a call to the priesthood.

“If tomorrow you want to be priests who live in the midst of the holy people of God, begin today to learn how to be with everyone, to learn something from each person you encounter,” he said.

Of course, the pope said, having a deep prayer life and personal relationship with Christ is essential for being a priest who knows how to gather the people together and bring them to Christ.

As he often does with groups of priests or religious, Pope Francis handed the seminarians his prepared text and proceeded to give them an improvised talk.

Sometimes, at the end of a busy day, a person might even nod off in the presence of the Blessed Sacrament, but, he said, “what could be more beautiful than falling asleep before the Lord? It happens to me. It’s not a sin.”

Pope Francis told the seminarians that Molfetta, the town where the seminary is located, always reminds him of Sister Bernadetta, a nun from Molfetta, who worked for years in Argentina.

“When I, as novice master (of the Jesuits) and also as provincial superior, had a problem with someone, I’d send them to speak with her,” the pope said. “And she, with two ‘spiritual slaps,’ would resolve everything.”

She had “that wisdom that women of God, mothers, have,” the pope said. “It is a grace to grow in your priestly vocation having near these women, these mothers, who know how to say what the Lord wants said.”

NEXT: Give flesh to the Gospel like Mary did, pope says on Guadalupe feast