Give flesh to the Gospel like Mary did, pope says on Guadalupe feast 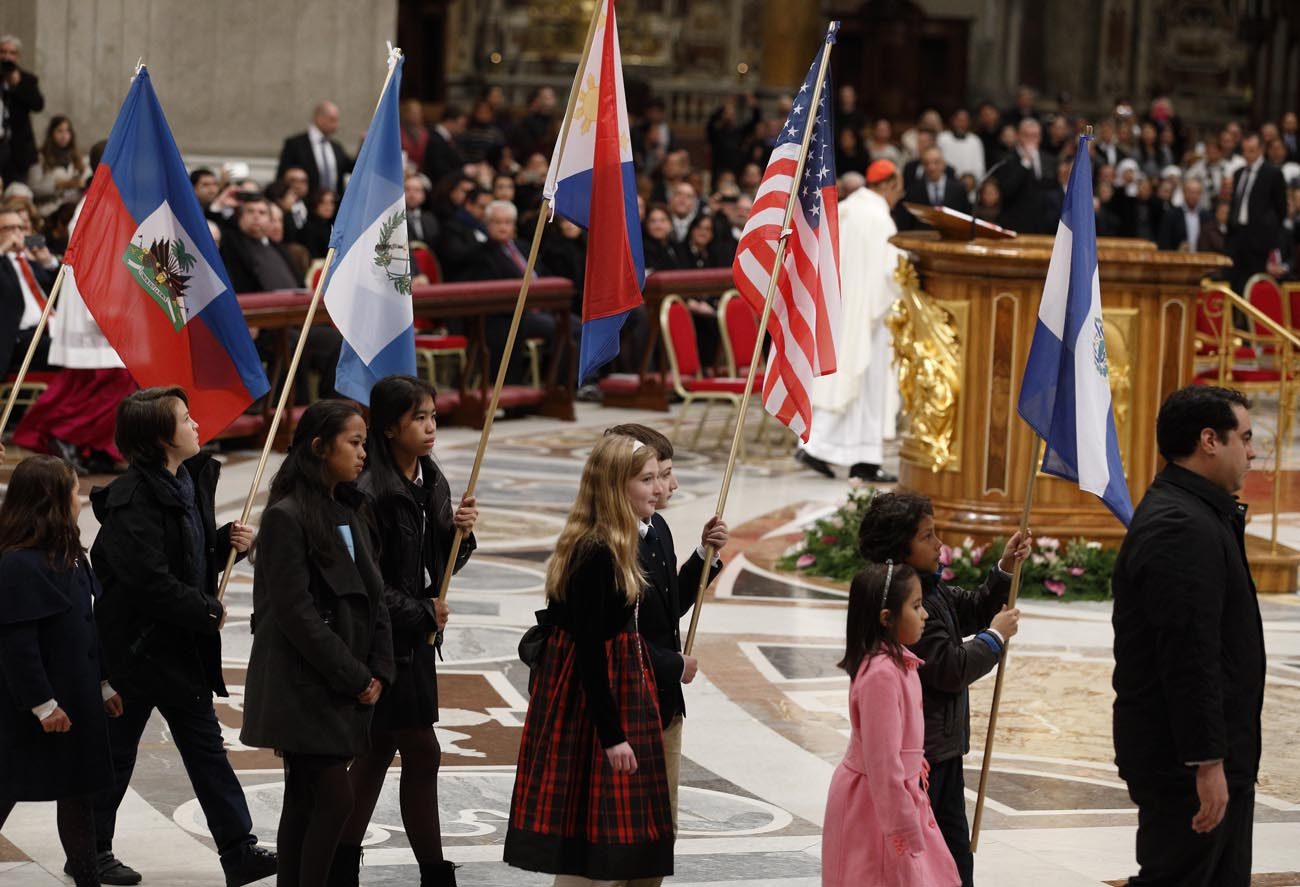 Children carry the flags of American nations at the start of a Mass celebrated by Pope Francis to mark the feast of Our Lady of Guadalupe in St. Peter's Basilica at the Vatican Dec. 12. (CNS photo/Paul Haring)

VATICAN CITY (CNS) — Celebrating the feast of Our Lady of Guadalupe, Pope Francis described Mary as a strong woman who inspires believers to give “flesh to the Gospel” in societies often marked by distrust and blindness.

“To look at the Guadalupana is to remember that the presence of the Lord always passes through those who manage to make his word flesh, who seek to embody the life of God within themselves, becoming living signs of his mercy,” Pope Francis said Dec. 12 during an evening Mass marking the feast day.

The Mass began with a procession of the flags of the nations of South, Central and North America — a sign that Our Lady of Guadalupe is patroness of the Americas.

Like the U.S. bishops’ had asked their faithful to do, the pope’s Mass included a special prayer “for our Hispanic brothers and sisters and for the migrants of our lands that their dignity would be recognized and protected” and that their family unity and social and ecclesial integration would be promoted.

Another prayer intention asked God, through Our Lady of Guadalupe, to end violence on the continent and guarantee “land, work and a roof” over the heads of all.

The pope himself ended his homily with an improvised prayer that Our Lady of Guadalupe would intercede to give peace, bread, a home and a strong faith to all the continent’s people.

The Mass was celebrated primarily in Spanish, although some of the prayers were in Portuguese and English. And the music, in addition to Latin, included Marian hymns in the indigenous Quechua, Nahuatl and Mapuche languages.

The feast day’s Gospel reading was the story of Mary visiting her cousin Elizabeth, a story Pope Francis said illustrates how, whenever God “visits,” people are moved and their very being “is transformed into praise and blessing.”

“When God visits us, he leaves us restless with the healthy restlessness of those who feel they have been invited to proclaim that he lives and is in the midst of his people,” the pope said. Mary, “the first disciple and missionary,” goes out to Elizabeth to share the good news.

She did the same in 1531 when she appeared to Juan Diego at Tepeyac in Mexico, the pope said. She reached out to the continent’s native peoples who were in pain, “becoming their mother.”

Mary is “the icon of the disciple, of the believing and prayerful woman who knows how to accompany and encourage our faith and our hope,” the pope said. Mary’s is not a “poetically sweetened faith,” but a faith that is strong and courageous in the face of brokenness and conflict.

The same kind of faith is needed today, the pope said, if the peoples of the Americas are to build a society that overcomes the increasing “signs of division and fragmentation,” where so many people are excluded and poor, “a society that likes to vaunt its scientific and technological advances, but that has become blind and insensitive to the thousands of faces that are there along the way, excluded by the blind pride of the few.”

Pope Francis questioned how the peoples of the Americas can boast of their societies’ well-being when there are “thousands and thousands of children and young people on the streets, begging and sleeping in railway stations, in the subway or wherever they find space. Children and young people exploited in illegal work or driven to seeking a few coins at intersections, cleaning the windshields of our cars.”

Too many families, he said, “are scarred by the suffering of seeing their children made victims of the merchants of death,” and too many elderly are abandoned to solitude. In addition, he said, there is “the precarious situation that affects the dignity of many women. Some, since childhood and adolescence, are subject to many forms of violence inside and outside the home.”

Yet, celebrating the feast of Our Lady of Guadalupe, he said, Christians are called to remember that they have a mother — “we are not and never will be an orphaned people” — and where there is a mother, there is a strong force pushing children to behave like brothers and sisters.

Celebrating the feast, he said, Christians make a commitment to proclaiming hope and trust in God’s ultimate victory and pledge to love like she loved.

“Her presence leads us to reconciliation, giving us the strength to create bonds in our blessed Latin American land, saying ‘yes’ to life and ‘no’ to all kinds of indifference, exclusion or the rejection of peoples and persons,” Pope Francis said. “Let us not be afraid to go out and look upon others with the same gaze, a gaze that makes us brothers and sisters.”

NEXT: Pope writes to Syrian president, pleading for peace and aid corridors