After 36 years of feeding the hungers of the human family, Ayella retires 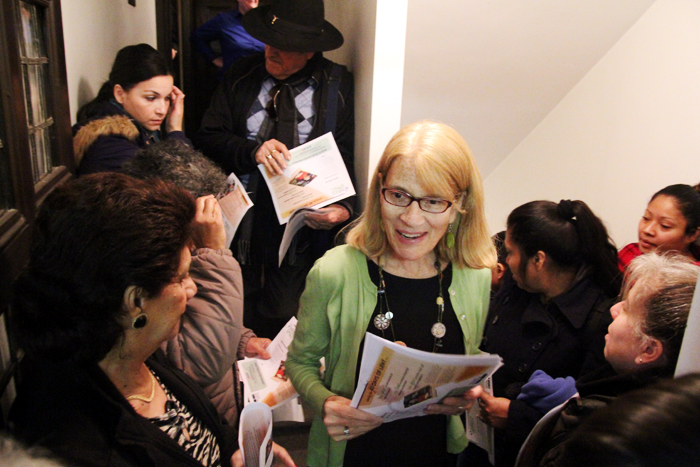 Anne Ayella runs an Operation Rice Bowl event in an archdiocesan church in February 2016. The longtime advocate for feeding the hungry retired this month from her position with Nutritional Development Services of the Archdiocese of Philadelphia after 36 years. (Photo by Sarah Webb) 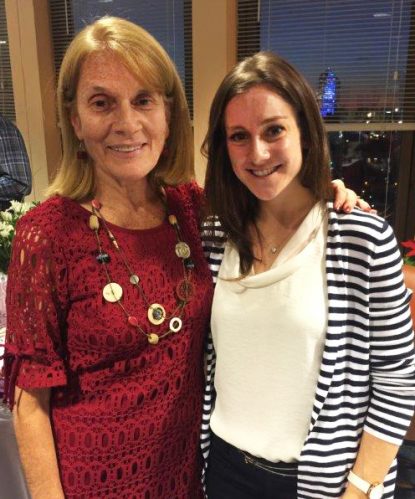 Anne Ayella (left) enjoys a moment at her retirement party completing 36 years of service at archdiocesan Nutritional Development Services. Ayella is pictured with her successor as director of non-government programs and community relations, Brooke Mullen.

Anne Healy Ayella has retired after 36 years of service at the Community Food Program of the Archdiocese of Philadelphia’s Nutritional Development Services, and she can look back on a career that was remarkably focused on the Gospel call to reach out to people who are hungry.

It really goes back further than 1980, when she joined the team of the archdiocesan agency.

The eldest of the four children of John and Adele Healy, her mother was the greatest early role model for Anne.

“She was a teacher and she knew a lot of people; several urban pastors were her friends, including Father James Daly at Our Mother of Sorrows, and she was always challenging us to remember that there are people in need,” Ayella said.

Concern for the poor isn’t enough. It has to be followed through by action, and in this Ayella took her cue from the Holy Child sisters who taught her. Their foundress Mother Cornelia Connelly has as a motto, “actions not words,” she recalls.

At St. Joseph’s College she took her degree in biology, but most important, she fell under the spell of Jesuit Father Ed Brady, who founded the Food Academy at St. Joseph, which was about the food industry certainly, but more to the point, making sure everyone had food.

“In my senior year he started the Faith-Justice Institute, so no matter what our major, we were allowed to put a faith and justice slant on our major,” Ayella recalls. “My senior year paper was on the relationship between malnutrition and brain development.”

This too, was the time of the Forty-First International Eucharistic Congress held in Philadelphia in August 1976 with the theme, “The Eucharist and the Hungers of the Human Family.”

It was the largest and, looking back on it, the most awesome Catholic gathering either before or since in the history of Philadelphia. Speakers included now-saints Mother Teresa of Calcutta and John Paul II (then Cardinal Karol Wojtyla); saints in waiting (with causes pending) Dorothy Day, Archbishop Fulton Sheen, Cardinal Terence Cooke and Dom Heldar Camera; as well as other distinguished Catholics including farm workers’ advocate Cesar Chavez and hometown girl, Princess Grace of Monaco.

“The Eucharistic Congress totally influenced me,” Ayella said. “It helped me to see the connection between the Eucharist and feeding the hungry. I learned so much from it.”

Not long after graduation, Ayella (still Anne Healy) joined the archdiocesan staff at the Cardinal’s Commission on Human Relations, the very effective social justice program instituted by Cardinal John Krol and headed by Msgr. Charles Devlin. Her focus at CCHR was working in community food programs.

At the same time, archdiocesan Nutritional Development Services, despite its somewhat corporate name, was doing similar work and was really becoming the gold standard for such programs in the Delaware Valley. At the suggestion of then-Director Patrick Temple-West, the archdiocesan food programs were consolidated and she moved over to his department. Already there was Lizanne Hagedorn, another St. Joseph’s grad who is currently director of finance and administration at NDS.

“I really think NDS is the modern-day equivalent of the Miracle of the Loaves and Fishes,” Ayella said. “Jesus would say to his disciples when people were hungry, ‘give them something to eat yourselves.’ We reach out to schools and churches and turn them into a giant food drive. We do everything we can to feed a hungry world.”

In 1981 Anne married her husband, Fred Ayella, and they have three grown children — their son, Fred, and daughters Emily and Charlotte (named for saintly role models, not the other two Bronte sisters).

She and her husband are now grandparents of Nicholas and Carly, and now that Anne is retiring from NDS she plans to babysit Carly. But mostly working from home, she will keep her hand in with CRS.

“It involves getting the word out to the parishes about the local/global connection,” she said.

Most Catholics know that CRS assists in feeding the hungry on an international level mostly through the annual Operation Rice Bowl Drive during Lent, but the official relief agency of the U.S. Catholic bishops has much more to it than just that. A recent development is the Parish Ambassador Corps.

“It is really training the people at the parish level so they get excited about the work of CRS,” Ayella said. “The message is we are all one human family and we are called to make a difference and live out the principles of Catholic social teaching.”

Clearly the Gospel message of caring for our fellow man still resonates with Anne Ayella. She isn’t about to just sit at home and rest on past accomplishments. That fire from the Eucharistic Congress is still burning within her.

PREVIOUS: 500 kids enjoy ‘the best day ever’ with Archbishop Chaput at Christmas party

NEXT: In Germantown, Vincentians worldwide plan global service to the poor