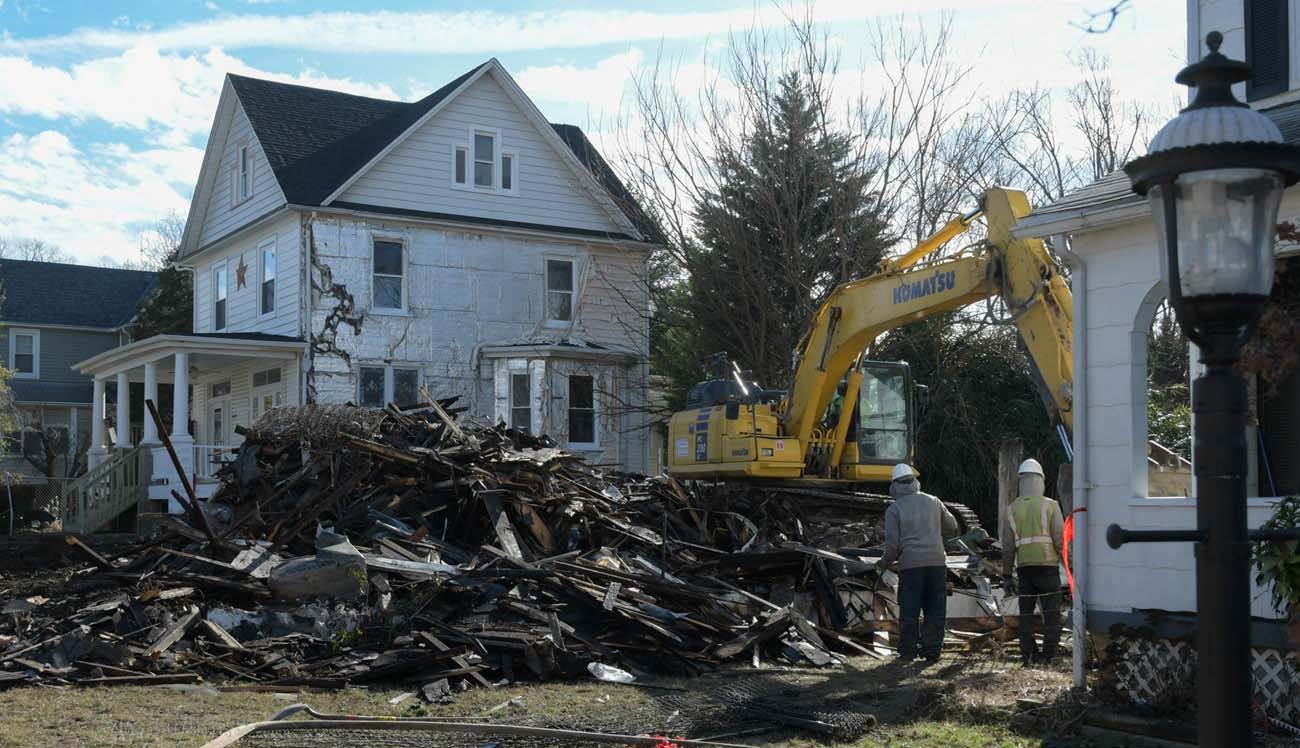 Construction crews begin the grim task of dismantling the Malone family home in Baltimore Jan. 13 after it was destroyed by a fire. Katie and William Malone lost six of their nine children in the Jan. 12 fire. Katie is a member of the Class of 1994 at the Institute of Notre Dame, a Catholic all-girls high school in Baltimore. (CNS photo/Kevin J. Parks, Catholic Review)

BALTIMORE (CNS) — Following a tragic Jan. 12 northeast Baltimore house fire in which six children lost their lives, nearby Catholic institutions are joining the effort to aid the stricken Malone family, who have ties to the Catholic Church.

One of the family’s nine children, an 8-year-old girl, was able to pull herself and two of her brothers, ages 4 and 5, out of the early morning fire. All six of the other children died: two boys, ages 9 months and two years; 3-year-old twin girls; and two more girls, ages 10 and 11.

The fire reportedly enveloped all three floors of the home. The third floor collapsed onto the second, which also partially collapsed, and firefighters had to fight the blaze from outside.

The father, William Malone, was at work at the time of the fire. The mother, Katie Malone, and the three surviving children were taken to area hospitals. The 8-year-old has since been released.

“On behalf of the Catholic clergy and laity of the Archdiocese of Baltimore, I offer heartfelt condolences for the family and friends of the lives lost and impacted by the tragic fire in Baltimore today,” Baltimore Archbishop William E. Lori said in a Jan. 12 statement. “We ask God’s blessing for his beloved children who we deeply mourn and for his loving embrace of those left behind.”

Father John Williamson, pastor of Church of the Ascension in Halethorpe and St. Augustine in Elkridge, said he had baptized at least one of the Malone children, the surviving 8-year-old.

Her grandparents, Henry and Sandra Ward, the parents of Katie Malone, are “very active” parishioners and extraordinary ministers of holy Communion at Ascension, he said.

Father Williamson said he let parishioners know about the tragedy and requested help at about 5 p.m. Jan. 12 via the electronic communication platform Flocknote. By 7 a.m. Jan. 13, $1,000 in donations had poured in.

Father Williamson added that poor box contributions from the weekend of Jan. 14-15 from both Ascension and St. Augustine would be donated to the Malones.

“That’s the immediate help — we’ll go from there,” he told the Catholic Review, the news outlet of the Archdiocese of Baltimore. “The family lost everything, so we’re trying to get them back on their feet.”

St. Mark School in Catonsville, where Sandra Ward is a teacher, and St. Augustine School will hold dress-down days for which students pay a small fee to wear clothes other than their uniforms to school, with proceeds going to the Malones.

Father Christopher Whatley, pastor of St. Mark Church, said the parish had already received some contributions for the Malones and would ask for more at Masses Jan. 14 and 15.

“They just need everything; it’s a total loss,” Father Whatley said, adding that his parish is also temporarily holding items for the Malones, until they have a place to put them.

The family has many connections with the archdiocese.

“I think everyone in the archdiocese has a connection to the story,” said Anders Alicea, principal of Immaculate Heart of Mary School in Towson, which is also raising money with a dress-down day.

Alicea said that one of his teachers taught with Sandra Ward, and taught Katie Malone. Two of his staff were students at the Institute of Notre Dame, a Baltimore all-girls Catholic high school, with Malone, who graduated from the all-girls high school in 1994.

“I just think our Catholic community should rally around the family and offer whatever help we can,” Alicea said.

According to a joint statement by David Ring, president of the school, and Melanie Gentry Morris, alumnae association president and a member of the Class of 1978, the school will give the Malone family a contribution from the 2017 Alumnae Penguin Pledge, a donor challenge held prior to its legendary basketball game against Mercy High School, an all-girls high school also in Baltimore. This year’s game is scheduled for Jan. 27 at Towson University’s SECU Arena.

Those with connections to the Malone family continue to grieve.

“We have families in our community who live in the neighborhood and who know the family directly,” said Rebecca Malone (no relation), who is principal of St. Francis of Assisi School in Baltimore.

Malone noted that City Neighbors Charter School, attended by some of the Malone children, is one of St. Francis’ partners.

St. Michael the Archangel School in Overlea also is geographically close to the fire location, and has grieving students.

“We met with the student government today and decided to do something,” principal Paul Kristoff said Jan. 13. The school will start with a dress-down day.

“We’re trying to figure out what the best approach is to help the family,” Kristoff said. “Certainly, they’re in our thoughts and prayers.”