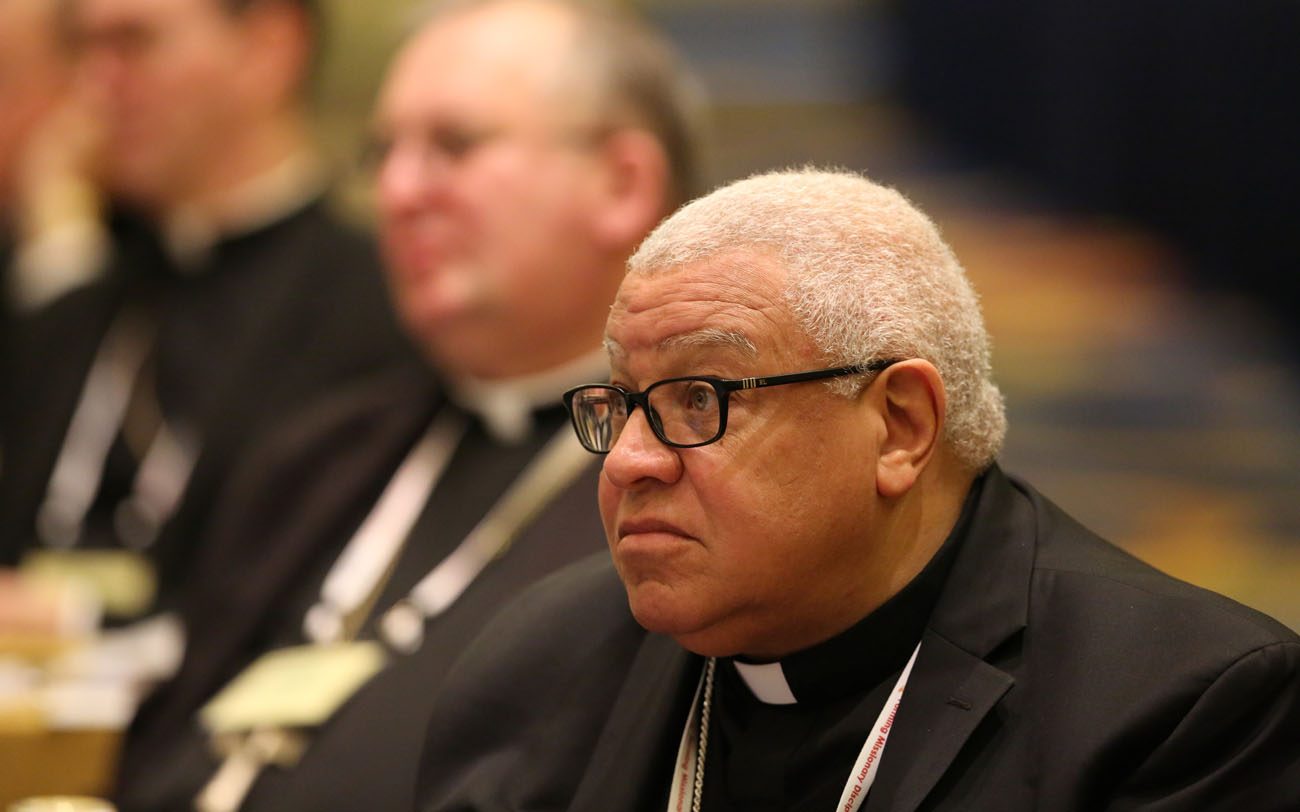 Bishop George V. Murry of Youngstown, Ohio, listens to a speaker Nov. 15 during the annual fall general assembly of the U.S. Conference of Catholic Bishops in Baltimore. (CNS photo/Bob Roller)

WASHINGTON (CNS) — Catholic schools should face the challenge of enrollment decline by actively promoting what they do best: their high academic achievement and their role in forming leaders, said Bishop George V. Murry of Youngstown, Ohio.

He has stressed this urgency in meetings around the country with educators and was able to quickly rattle off Catholic school accomplishments in a Jan. 19 interview with Catholic News Service, pointing out that Catholic schools continue to score higher in national assessment tests and Catholic high schools have a 99 percent graduation rate. He also said there is plenty of data showing that Catholic schools outperform their public school counterparts on test scores and academics.

The growing decrease in Catholic school enrollment — which Bishop Murry attributes to shifting demographics, tuition costs and changes in faith practice — is something he thinks should be faced head on.

Last fall, in a keynote address at the NCEA Catholic Leadership Summit in Indianapolis, he told diocesan leaders that the overall national enrollment decline of Catholic schools is a responsibility for everyone to take up: “the entire church and society at large.”

“Catholic schools are a gift to the nation and need us all to work together for their growth, both through local action in our particular schools and at the national level across the country. And there is much that we, as professional educators, teachers, principals, staff, superintendents, pastors and bishops, can do and indeed are doing to grow enrollment in our Catholic schools,” he added.

He told CNS that years ago, Catholic school leaders went through a period of anxiety that they were not putting enough emphasis on their Catholic identity. Although that always deserves attention, he said, he thinks many schools should focus on emphasizing their successes and why parents should consider sending their children there.

Along that line, he said church leaders are working to promote efforts to make Catholic schools more affordable and he pointed out that 27 states and the District of Columbia have legislation providing financial assistance to parents who choose private or faith-based schools.

He also said church leaders are being more intentional in their outreach to welcome Latino students while also remaining committed to African-American students in the inner city.

“So many students, myself included, got opportunities from Catholic schools. It is important we remain in our cities,” he said.

At the diocesan leaders meeting, he mentioned some of the innovative efforts of Catholic schools in Chicago; dual-language immersion schools in Los Angeles; regionalized schools in New York; donor outreach in Memphis, Tennessee; and fundraising in Philadelphia.

But for all the innovation, another key point that affects Catholic school enrollment, he said, is the overall decline in Mass attendance.

“We have to reach out those who’ve drifted away and instill in them importance of training their children in what the faith is about,” he told CNS.

That faith aspect is key to instilling in Catholic school students a sense of service — something he said is obvious when you look at leaders in different cities or in Congress and realize many of them attended Catholic schools.

Bishop Murry, who has seen Catholic schools from all sides: as an elementary and high school student, a Catholic high school teacher and administrator and a Catholic college administrator, is convinced these schools are not just good for young people at an isolated time in their lives but that they have long-term effects.

Put another way: “They are an investment in our future church,” he said.

NEXT: Former employee sues group that advocates for victims of clergy abuse