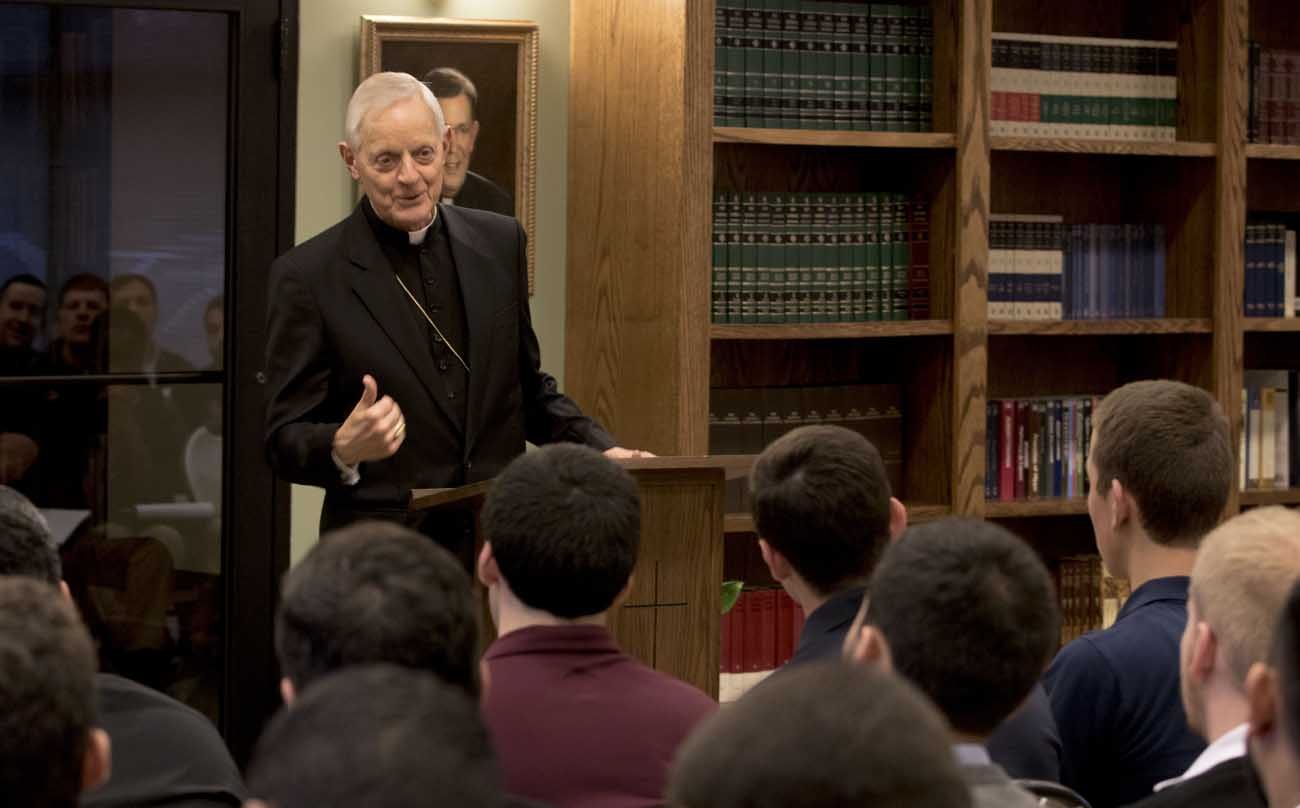 He addressed a workshop on the papal document for seminarians of the Archdiocese of Washington.

“The apostolic exhortation calls for a compassionate pastoral approach to many people — married, single and divorced — who are struggling to face issues in life, the teaching of the church, and their own desire to reconcile all of this,” the cardinal said. “The exhortation is a call to compassionate accompaniment in helping all to experience Christ’s love and mercy.”

The cardinal said the document does not change the Catholic Church’s teaching on marriage, but “places a greater emphasis on the role of the individual conscience in appropriating those moral norms in the person’s actual circumstances.”

About 60 stateside seminarians of the Archdiocese of Washington attended the workshop at the St. John Paul II Seminary. They were joined via a Facetime hookup by another 10 of the archdiocese’s seminarians who are studying at the Pontifical North American College in Rome. The Washington seminary’s priest faculty members also attended the gathering.

The workshop also included a talk on priestly formation by Msgr. Robert Panke, rector of the seminary and director of the archdiocese’s Office of Priest Formation. Local pastors spoke on how the papal exhortation is assisting them in their work of preparing and working with married couples.

A recent publication from the archdiocese’s Office of Priest Vocations and Formation, “Reflections on ‘Amoris Laetitia,'” formed the framework for the discussion.

“When we begin our reflections on the pastoral implications of ‘Amoris Laetitia,’ we need to start with the understanding that none of the teaching of the church has been changed: This includes the teaching on the indissolubility of marriage, the directives you find in the Code of Canon Law, and also the role of individual conscience in the determination of personal culpability,” the cardinal said.

Cardinal Wuerl said that this past year, Pope Francis issued “Amoris Laetitia” (“The Joy of Love”) knowing that many people in today’s world live in a highly secular culture where their values are shaped by materialism, individualism and relativism. “The pope noted that it is precisely in this context that our people live and that our teaching must help them move beyond,” the cardinal said.

Pope Francis encourages pastoral accompaniment of couples, “even for those in a marriage that does not reflect entirely the church’s teaching. … Christ inspires the church to turn to them with love and affection to assist them in overcoming the trials they face,” the cardinal said.

“Marriage and family, as we know from personal experiences,” he continued, “endure all the pains and sufferings, the trials and tribulations of the human condition. Yet, we know that with and through the risen Christ, all things are made new.”

Pointing to the story of the woman caught in adultery from St. John’s Gospel, Cardinal Wuerl noted that Jesus when confronted with her does not abolish the law on marriage. “What he does is to recognize the sinful human condition of the woman, avoids condemning her and then tells her to go but to sin no more,” the cardinal said. “What we too should recognize here is the mercy of God at work in each human life, not absolving us from the law” but recognizing “that we need constantly to be helped back up so that we can continue on our way trying to sin no more.”

Cardinal Wuerl underscored the importance of the sacrament of confession and pointed out that Pope Francis in announcing the Year of Mercy described God’s mercy as “the beating heart of the Gospel.” The cardinal said “Amoris Laetitia” emphasized that sharing God’s love and mercy should be at the heart of the Catholic Church’s outreach to married couples and families.

“The Holy Father points the way to how the church might take steps to support married couples and families in their lives today, and to mercifully bring hope and healing to those who find themselves in broken and wounded situations, with a sensitivity toward the diversity of particular relationships and cultures,” the cardinal said.

Discussing how priests as pastors of souls should teach and accompany the faithful who come to them for guidance and assist them in the formation of their conscience, the cardinal noted, “Pastoral dialogue, accompaniment and personal integration of the faith involve the development of conscience and also the expression of a level of support or confirmation for the judgment the individual is making about the state of his or her own soul.”

Cardinal Wuerl added that “our Holy Father reminds us, the role of the priest in complete fidelity with the Church’s perennial teaching is to help ‘form consciences, not to replace them.'”

Noting the exhortation’s greater emphasis on the role of conscience, the cardinal said, “The priest can and should impart the teaching and help form conscience. But the actual judgment of conscience and therefore the culpability before God for a specific action belongs to the individual.”

The pope in “Amoris Laetitia” also said supporting marriage and families should be undertaken in a more extensive way so the church’s pastoral outreach can help people at all stages of married and family life encounter Christ.

“The Holy Father calls for a family apostolate that offers more adequate catechesis and formation, not only of engaged and married couples and their children, but also priests, deacons, seminarians, consecrated religious, catechists, teachers, social workers, medical professionals and other pastoral workers,” the cardinal said.

The exhortation was shaped by the findings of two synods called by Pope Francis, the cardinal noted, one in 2014 on the challenges of marriage and family life today and another the next year on responding to those challenges through church teaching. Cardinal Wuerl said “Amoris Laetitia” is “a consensus document” reflecting synod statements that all received significant approval from participating bishops from around the world.

“Amoris Laetitia” also is a “continuity exhortation,” the cardinal said, noting it offers papal magisterium in continuity with the teaching of recent popes and church tradition, with numerous citations from St. John Paul, Pope Benedict XVI and Blessed Paul VI, and from the Second Vatican Council, the Catechism of the Catholic Church and St. Thomas Aquinas.

All apostolic exhortations following from synods have the same magisterial authority, noted Cardinal Wuerl. “If you begin to pick and choose which ones you will accept because of the content you like or dislike, then you in effect empty all of them of any magisterial binding authority,” he said, adding, “They’re all part of papal magisterium.”

Concluding his remarks, the cardinal noted that pastoral accompaniment involves the priest walking together with the individual or couple on a journey to Christ. “In the action of going out, encountering, sharing and accompanying, we also recognize that in the journey, we — ourselves — are also drawing closer to the Lord,” he said.

In his opening talk, Msgr. Panke said the four elements of priestly formation — human, spiritual, intellectual and pastoral — help priests and those preparing for priesthood configure their minds and hearts to Christ, so they can “teach the truth with love and patience” and accompany those whom they serve and lead them to Jesus.

In the pastors’ panel on “Amoris Laetitia,” Msgr. Eddie Tolentino of St. Michael the Archangel Parish in Silver Spring, Maryland, said he plans on using the exhortation to redesign his parish’s marriage preparation program and its outreach to married couples. Its title, he said, reflects two key aspects of God — joy and love — that should shape a parish’s marriage ministry.