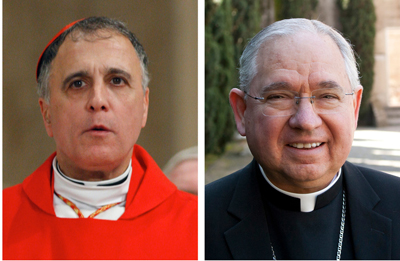 The president’s order suspends the entry of refugees into the United States for 120 days, indefinitely halts the admission of Syrian refugees and bars individuals from seven predominantly Muslim countries for 90 days.

Cardinal DiNardo and Archbishop Gomez were grateful for the many U.S. bishops who have spoken out “in defense of God’s people” since President Trump announced the ban Jan. 27. “Now, we call upon all the Catholic faithful to join us as we unite our voices with all who speak in defense of human dignity,” they said.

“The bond between Christians and Muslims is founded on the unbreakable strength of charity and justice,” they said. “The church will not waiver in her defense of our sisters and brothers of all faiths who suffer at the hands of merciless persecutors.”

Refugees fleeing from the Islamic State and other extremists in the Middle East “are sacrificing all they have in the name of peace and freedom,” the bishops said, adding many are families, “no different from yours or mine, seeking safety and security for their children.”

The United States “should welcome them as allies in a common fight against evil. We must screen vigilantly for infiltrators who would do us harm, but we must always be equally vigilant in our welcome of friends.”

The bishops added that welcoming the stranger and those fleeing oppression is not merely an option for the Christian life but “is the very form of Christianity itself. Our actions must remind people of Jesus.”

“The actions of our government must remind people of basic humanity. Where our brothers and sisters suffer rejection and abandonment we will lift our voice on their behalf. We will welcome them and receive them. They are Jesus and the church will not turn away from him.

“Our desire is not to enter the political arena, but rather to proclaim Christ alive in the world today. In the very moment a family abandons their home under threat of death, Jesus is present. And he says to each of us, ‘whatever you did for one of these least brothers of mine, you did for me'” (Mt. 25:40).